After a record expansion, recent signs suggest the nation’s economy may be softening. Unusual patterns in the bond market, signs of slower growth overseas, and the uncertainty of the ongoing trade conflict with China have all raised fears that a downturn may be on the horizon. Yet it is still unclear whether the country is actually headed for a recession. Moreover, all these signs focus on the United States as a whole (or even the whole world). It would be helpful to have more signs for the California economy in particular.

The PPIC Statewide Survey can offer one such sign. The survey has amassed an enormous amount of data on Californians’ views of the economy. For more than 20 years, it has asked survey participants whether they think California will have good or bad economic times in the next 12 months. This question was adapted from the University of Michigan Index of Consumer Sentiment and has been asked of everyone: rich and poor, politically engaged and disaffected, citizen and non-citizen.

Given the broad scope of the survey, in the aggregate these respondents may be good at predicting the direction of the economy. They see what everyone else sees on the news, but they can also report on their own private circumstances and those of close friends and relatives. This might pick up on information that has not yet emerged in official statistics. Indeed, when we look at survey responses alongside recent recessions, an interesting pattern emerges.

The figure below shows the share of survey respondents who have predicted good economic times for California, and plots it against the state’s per capita income and the periods officially labeled recessions. PPIC respondents appear to have anticipated the last two downturns. The share expecting a good economy plunged a few months in advance of each recession and a slide in state incomes. The drop happened a couple months before the 2001 recession, but as much as nine months before the Great Recession. 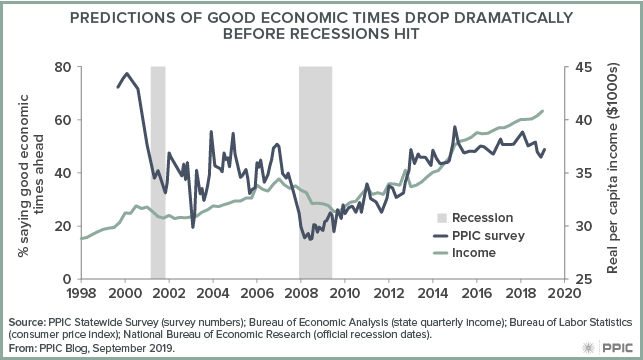 What do the numbers tell us today? The last few surveys have seen a slight drop in the share expecting good times, but the shift hasn’t yet matched the magnitude seen before the last two recessions. At this point the trend is ambiguous, but well worth watching. It can supplement other California-specific information such as the State Fiscal Health Index from the Legislative Analyst’s Office, but a few months earlier. A sharp and sustained drop in Californians’ optimism about the economy may signal dark storm clouds on the horizon.

A Tight Labor Market: Challenges for Business, Opportunities for Workers?

Californians Are Pessimistic about Economic Times Ahead

How Is Remote Work Affecting Worker Preferences and the Economy?

Preparing for California’s Next Recession