It’s been over a year since California’s first confirmed case of COVID-19. Since then, more than 40,000 Californians have died of the disease. People of color—who are more likely to work in essential jobs and to have underlying health conditions—have been disproportionately affected. PPIC’s most recent survey shows Latinos and African Americans are more likely to be very concerned about the coronavirus, and African Americans are especially hesitant about getting vaccinated.

As California’s daily case numbers begin to decline, no one knows what the future holds. Increasingly, Californians are more likely to think the worst of the pandemic is behind us. In our January survey, nearly six in ten Californians hold this view. However, African Americans (49%) and Latinos (53%) are less optimistic than whites (61%) and Asian Americans (64%). Indeed, African Americans were the least optimistic across regions and demographic groups in January, last September (50%), and last May (69%).

Amid uncertainty, fears about the pandemic remain widespread. About six in ten Californians express concern (25% very concerned, 35% somewhat concerned) about getting the coronavirus and requiring hospitalization—similar to our May survey (24% very, 34% somewhat). Latinos (35%) and African Americans (32%) are more likely than Asian Americans (21%) and whites (17%) to say they are very concerned. 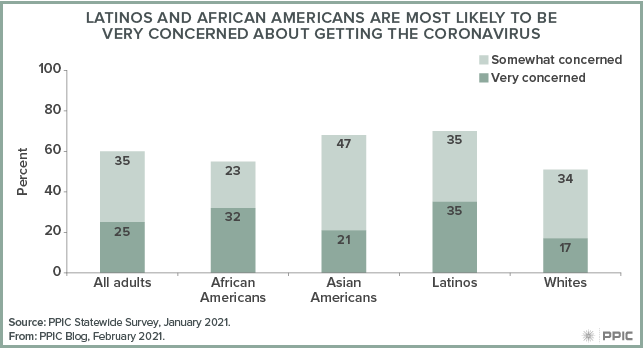 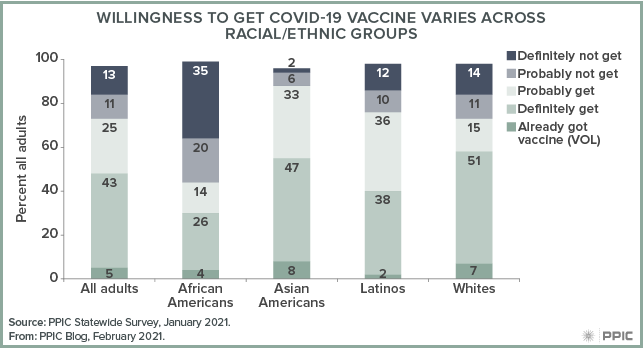 Overcoming the pandemic will depend on the availability of vaccines and people’s willingness to get vaccinated. In our January survey, a majority of adults rated California’s vaccination distribution negatively, and there are clear racial/ethnic disparities in Californians’ perceptions of the vaccine. In the next few months it will be critical for the state to improve on both fronts. PPIC will continue to track Californians’ opinions on these issues as the state battles with the pandemic.

As COVID Deaths Have Declined, Disparities for Latinos Have Narrowed

Who Is Unvaccinated in California?