With tensions between law enforcement and minority communities continuing to make headlines, media outlets and academic researchers both report stark racial and ethnic differences in criminal justice experiences, including sentencing and incarceration. The disparity between African Americans and whites is especially striking. For example, the prison incarceration rate in California is 4,180 per 100,000 residents for African American men, compared with 420 for white men. It is likely that this inequality is significantly affected by the first step in the criminal justice process—arrests.

California’s various law enforcement agencies make a substantial number of arrests each year—1.35 million in 2016. While this is a staggering number, it’s also the lowest number of arrests since 1980 and marks a dramatic decline of more than one million arrests (64%) since a peak in 1990. 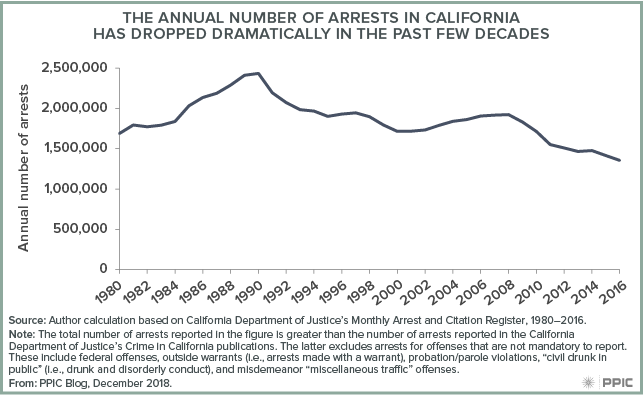 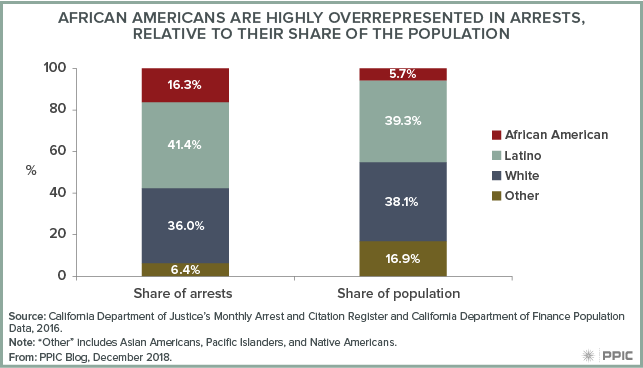 Though much of the penal code is determined by the state legislature, the state does not closely monitor how arrest decisions change over time or vary across jurisdictions, nor how these decisions may affect demographic groups differently. Two efforts—one implemented by the state legislature and one by PPIC—seek to fill this knowledge gap and will bring data-driven information into the broader discussion about policing and community relations.

In 2015, California’s legislature passed the Racial and Identity Profiling Act (AB 953). This legislation requires law enforcement agencies to begin collecting data in 2018 on all initial police interactions with the public, including reason, location, race/ethnicity, gender, and age. While this will provide an opportunity to learn more about law enforcement interactions, the data will not be available for statewide analysis until 2023 or later.

In the meantime, PPIC has launched a project to begin identifying areas in need of attention in California arrests and to frame the conversation for sustainable solutions at the state and local level. In our first report, we examine trends over time and provide a descriptive profile of arrestees, including patterns in race/ethnicity, gender, age, offense type, and the county where the arrest took place. Our interactive tool allows for deeper exploration of arrest rates across California counties.

Over the next two years, we will further examine whether arrestees were booked into jail or cited and released in the field. We will also seek to understand possible contributing factors to these arrest patterns—such as crime rates, law enforcement and correctional resources, economic conditions and expenditures, and demographics. This project uses unique data from the California Department of Justice’s Monthly Arrest and Citation Register (MACR).

As the state and local jurisdictions continue their data collection efforts on police interactions, PPIC’s research will provide a better understanding of long-term trends in arrests and differences throughout the state. Stay tuned for more insights on this critical but understudied aspect of California’s criminal justice system.