This post is part of a series reflecting on California’s experience of the COVID-19 pandemic.

California experienced notable shifts in crime numbers during the pandemic. Four of the state’s major cities—Los Angeles, Oakland, San Diego, and San Francisco—saw major spikes in certain crimes, mostly followed by downward trends. Today, most crime numbers are relatively close to the low levels that the state has experienced over the last decade. However, increases in the first year and a half of the pandemic—particularly in homicide and aggravated assault—are a disturbing sign of the toll taken during these unprecedented times.

We examined reported crime numbers for Los Angeles, Oakland, San Diego, and San Francisco between January 1, 2020, and January 31, 2022. It is important to note that while these cities make their data quickly available for analysis, the numbers are preliminary: law enforcement agencies update and review the data before submitting them to the Department of Justice as official statistics. Also, we do not yet have data on other cities or rural areas across the state for 2021. Official crime statistics may underestimate the actual number of incidents—all crimes are unlikely to be reported to law enforcement agencies. In addition, reports likely vary depending on the type of crime.

The four cities saw some disparate patterns. The number of homicides in San Diego remained unchanged in 2021, while Oakland’s jumped by 36%, and San Francisco and Los Angeles saw an increase of 17% and 13% respectively.

Robberies decreased statewide in 2020 by 14%, but rose by about 4% in 2021 in the four major cities. This was driven by a notable jump in Oakland—almost 20%—along with a 6% increase in Los Angeles. These increases brought numbers back to roughly where they were at the beginning of the pandemic. San Francisco and San Diego saw continued decreases in 2021, of 6% and 3% respectively. 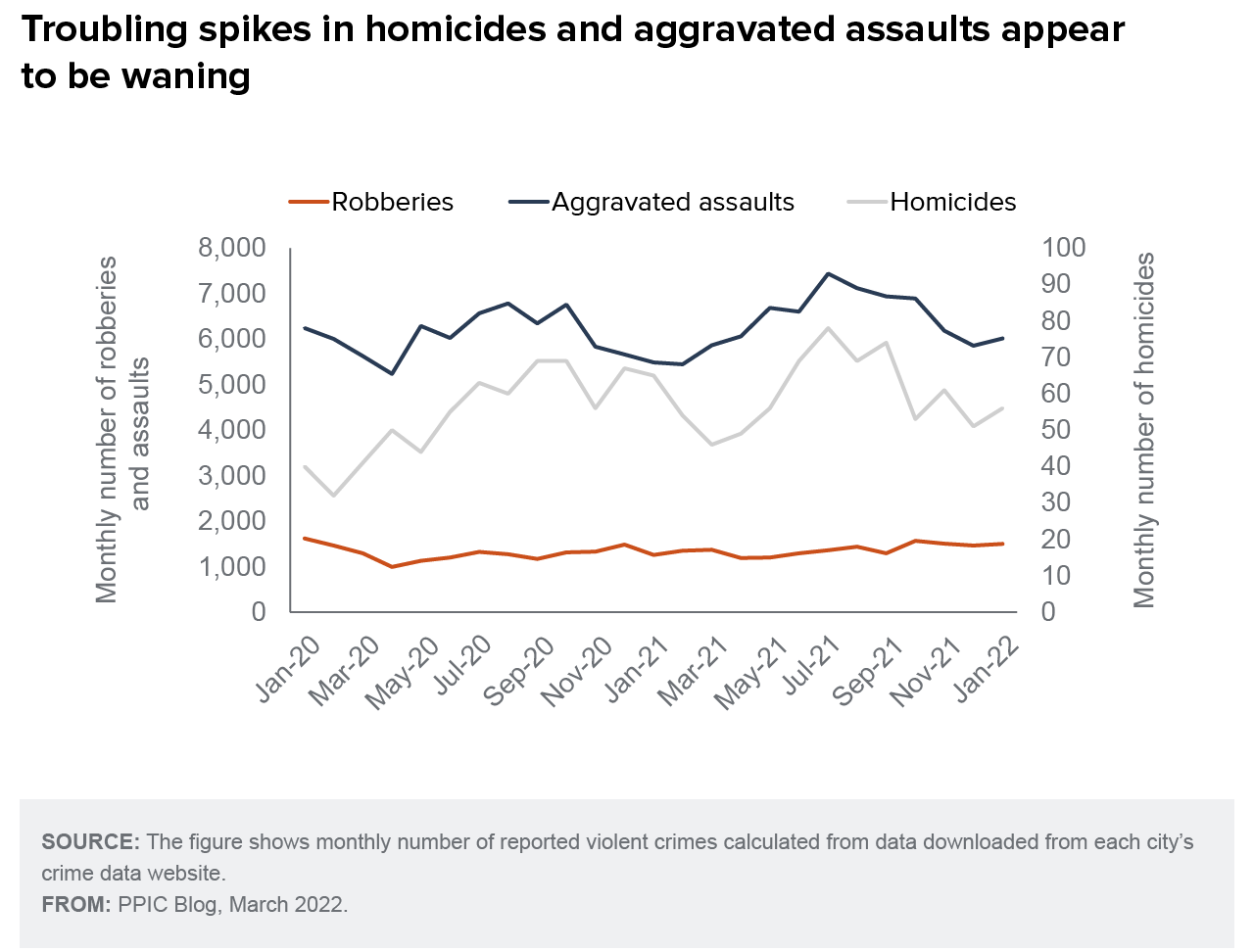 While shoplifting and smash-and-grabs have received a lot of recent media attention, the data highlight increases in auto theft as an area of greater concern. After reaching the lowest level in California since the early 1960s in 2019, statewide auto theft jumped 19% in 2020. A double-digit increase continued in 2021 in San Diego (16%), Los Angeles (13%) and Oakland (10%), while San Francisco saw a 5% rise. 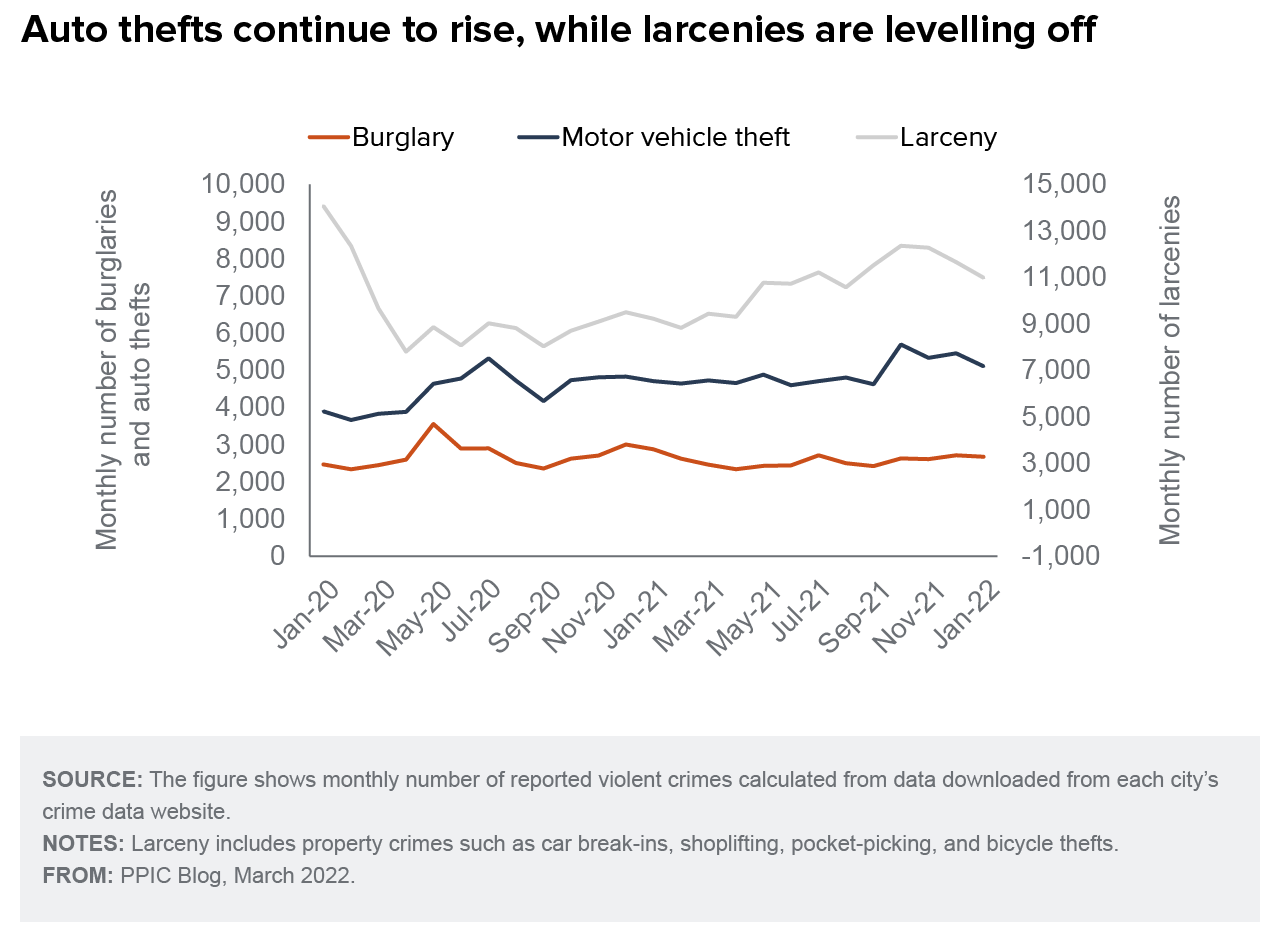 Shoplifting incidents dropped precipitously in 2020, by 29% statewide, to the lowest reported number in decades. However, commercial burglaries—driven by a sudden spike around the time of civil unrest in the wake of the murder of George Floyd—experienced an increase that same year, rising by 11% statewide.

When combined, commercial burglaries and shoplifting were down 10% in 2020. Decreases continued in 2021 in Los Angeles (-15%), San Diego (-5%) and Oakland (-4%) and while the reported number of shoplifting incidents and commercial burglaries in San Francisco jumped from about 3,000 in 2020 to slightly more than 4,000 in 2021 (an increase of 32%). The increase has been driven by a jump in shoplifting incidents that began in late summer 2021. Los Angeles experienced coinciding increases in the monthly numbers but its numbers remain below pre-pandemic numbers. 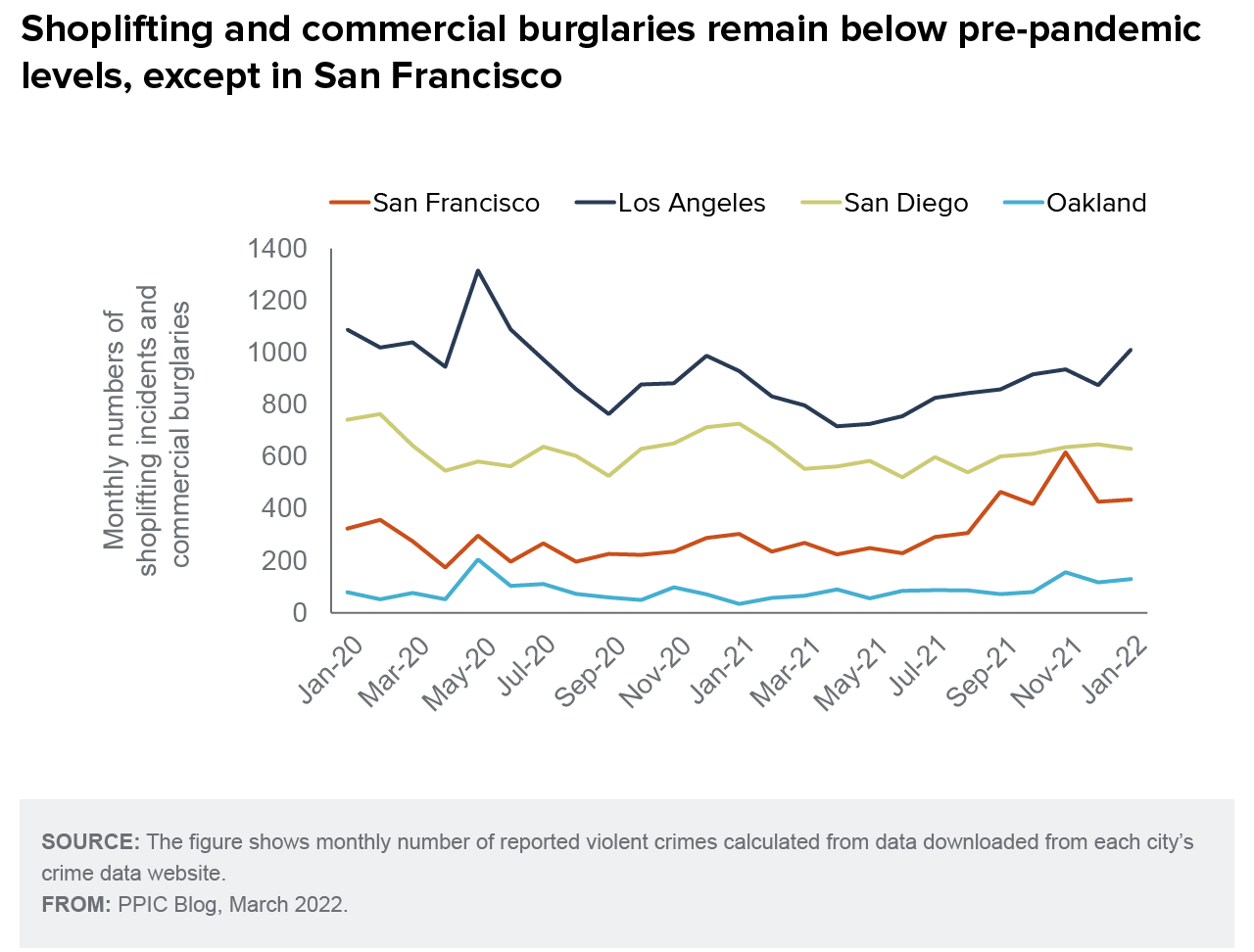 These changes in crime trends are not unique to California, and the state is still experiencing a longer-term trend in relatively low levels of crime. However, increases in homicides and aggravated assault in the first year and a half of the pandemic are very troubling, especially because communities of color have felt the greatest impact. Auto theft is also an ongoing concern: it is up markedly and so far there is no strong indication of coming back down. Increased concerns about crime in California may be a reaction to these particular trends, as well as to widespread reports of retail theft (which may be a highly localized trend).

The pandemic brought broad and significant challenges to all aspects of criminal justice in California, including policing, courts, and correctional systems. These challenges, combined with the widespread impacts of COVID-19, make efforts to identify specific reasons behind changing crime trends very difficult—with time, more answers should become clear. Nonetheless, monitoring these trends remains imperative, not only to determining patterns in specific crimes but also to identifying locations that are experiencing increases. Going forward, PPIC will continue to analyze crime trends and examine crime-reducing strategies.