Since we first asked about party favorability in March 2010, positive views of the parties have rarely exceeded 50% and impressions have remained steady among adults and likely voters. Although favorability toward the Democratic Party sits below 50% overall, it rose among certain groups, including African Americans (52% 2010, 71% today), those with annual household incomes of $40,000 to $80,000 (39% in 2010, 49% today), and college graduates (39% in 2010, 48% today). Party favorability remained stable across all other regions and demographic groups. 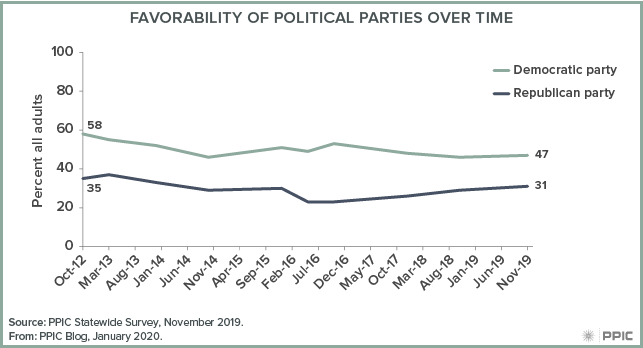 While less than half of adults and likely voters hold positive views about either major party, majorities of partisans continue to regard their party well. Favorability has climbed among party members since 2010 (Democratic 68% 2010, 76% today; Republican 54% 2010, 77% today). Among independents, impressions of both parties remain similar to 2010, but about six in ten independents, who comprise more than a quarter of the California electorate, report a poor impression of both parties (60% Democratic, 63% Republican). Notably, today, 21% of adults and 14% of likely voters have an unfavorable view of both parties.

With both parties facing mediocre ratings, about half or more of California’s residents have consistently called for a third major political party since October 2006. Today, just one in three adults (34%) and likely voters (32%) think that the two major parties do an adequate job representing the American people. About half or more across parties and regions—and a plurality among demographic groups—feel a third major party is needed, with independents (62%) and those earning over $40,000 annually (62%) most likely to hold this view. 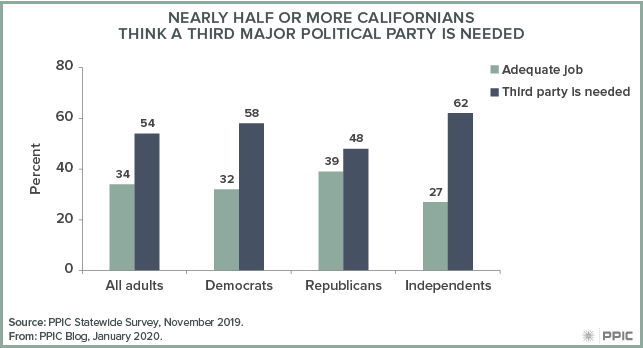 As the electorate changes, and as the 2020 election landscape develops, PPIC will continue to monitor Californians’ views on the major political parties.

Approval Ratings in a Hyper-Partisan Era