Millions of Americans across the country have taken to the streets, protesting the death of George Floyd and the deep, persistent conditions of racial injustice that plague our nation. In California, residents have turned out in large crowds, clashing with the police in cities large and small around the state.

Before this latest public outpouring of grief and rage over the death of an African American man in police custody, the PPIC Statewide Survey asked Californians about their perceptions of the police in their local community: Do residents think all racial and ethnic groups are treated fairly? In February, the last time we asked this question, a majority of adults responded that all groups received fair treatment either almost always (30%) or most of the time (31%); only 3 percent volunteer that police always treat groups fairly.

But this overall finding masks significant disagreement, particularly by African Americans, who are far less likely (32%) than others—Latinos (63%), Asian Americans (66%), and whites (66%)—to say that racial and ethnic groups are treated fairly by the police at least most of the time. 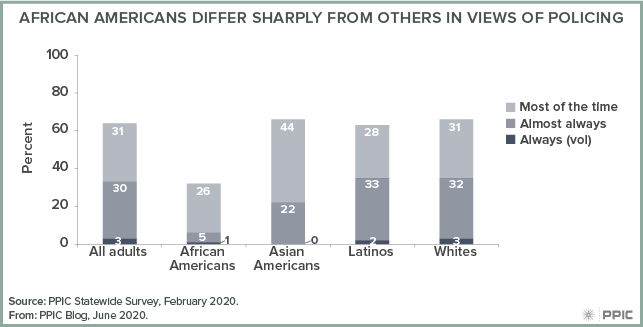 Differences persist among other demographic groups as well. Across regions, residents in the Central Valley (70%) are the most likely to think that the police treat racial and ethnic groups fairly at least most of the time. Elsewhere, fewer residents agree (66% Orange/San Diego, 62% San Francisco Bay Area, 60% Los Angeles, 54% Inland Empire).

Finally, perceptions of fairness diverge strongly along partisan lines. Republicans (80%) are far more likely than independents (63%) and Democrats (54%) to think that racial and ethnic groups are treated fairly by the police almost always or most of the time.

These findings demonstrate that even in relatively good times—before the coronavirus pandemic and consequent recession—Californians thought about fairness in a key aspect of social life in very different ways. Today, when challenges are far greater and the stakes are much higher, the need for far-sighted, innovative, and thoughtful action from leaders around the state is more urgent than ever.