Early in the pandemic most of California’s prisons avoided widespread COVID-19 outbreaks, unlike two prisons in Ohio. The ongoing outbreak at San Quentin, however, highlights the threat the virus poses—and drawing on Ohio’s experience can help California avoid severe outbreaks in prisons throughout the state.

California prisons share many similarities with those in Ohio. In both systems, at least one in five inmates is over 50 years old. Like many California prisons, Ohio’s prisons at Marion and Pickaway were more than 130% over capacity when COVID-19 struck.

We know the extent of the outbreaks at Marion and Pickaway because Governor DeWine ordered mass testing in prisons with confirmed cases. Although Ohio continues to report COVID-19 information daily, mass testing was discontinued on April 30. Nearly all Marion inmates, most Pickaway prisoners, and a large share of workers at both sites eventually tested positive for COVID-19. While we do not know how symptoms varied, 96% of infected inmates were asymptomatic when tested and some have died.

As of mid-June, 13 of more than 2,100 infected Marion inmates had died—about 0.6%. Assuming all of the approximate 2,000 inmates at Pickaway were infected, the 35 deaths there suggest a mortality rate of about 1.8%. The rate may have been three times higher because most Pickaway inmates are elderly and the prison operates a large medical facility. 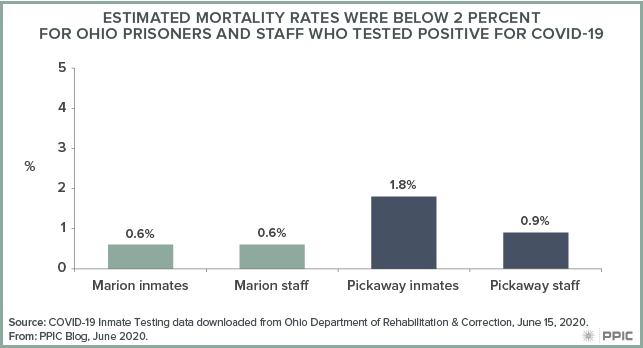 Even though testing in San Quentin has accelerated during the outbreak, California prison inmates and staff are not tested regularly. Infected inmates were transferred to San Quentin from Chino—some without being tested for a month. In California prisons, inmates and staff are now required to wear masks after receiving them, but whether they are being worn consistently is unclear. Due to the extent of the current outbreak, Governor Newsom is considering moving inmates from San Quentin to local hospitals and releasing inmates from other prisons who are nearing the ends of their sentences.

By routinely, repeatedly, and rapidly testing inmates and staff, California can learn more about how COVID-19 is introduced to prisons, how quickly it spreads, and how to prevent infection—particularly among workers moving between prisons and local communities daily. California could also test different containment strategies, such as those recommended for nursing homes, to examine whether those strategies can neutralize the virus’s spread and determine how to best protect at-risk inmates.

Scientists predict coronavirus cases will surge again later in 2020. Using these intervening months to develop a more nuanced understanding of how COVID-19 moves through prisons and what might be done to curtail its spread may help to minimize the death toll, particularly for California’s most vulnerable inmates and prison workers.