What’s Next for California’s Public Pensions?

Last week, the California Supreme Court issued an important ruling regarding public pensions. The case, CalFire Local 2881 v. CalPERS, was one of several lawsuits challenging the major 2013 pension reform law that was championed by then-Governor Brown. By upholding the changes contained in the law, the court’s decision answered one important question about the law’s legality. But it also left a much larger one unanswered: whether state or local governments will be able to alter some pension provisions during a future economic downturn.

Pensions present a significant challenge for California. The largest funds at the pension systems for California’s public employees (CalPERS) and state teachers (CalSTRS) have reported gaps of more than $138.9 billion and $107.3 billion, respectively, between their estimated obligations to retirees and the current value of their assets.

Closing those gaps will require larger payments from state and local governments, squeezing out dollars that would otherwise be used for programs and services. Employer contributions have already increased substantially in recent years. For example, public agency contributions into CalPERS increased from $4.19 billion to $6.71 billion from 2013 to 2017. And K–14 district contributions into CalSTRS have increased even more sharply, from $2.27 billion to $6.72 billion between 2013 and 2019. Indeed, the need to meet pension obligations was one of the financial pressures factoring into both the Los Angeles and Oakland teacher strikes. 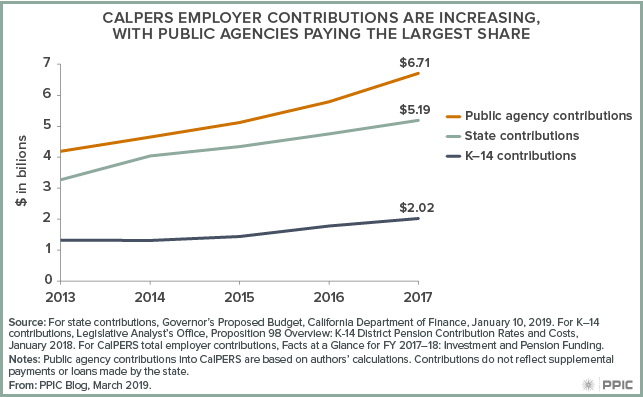 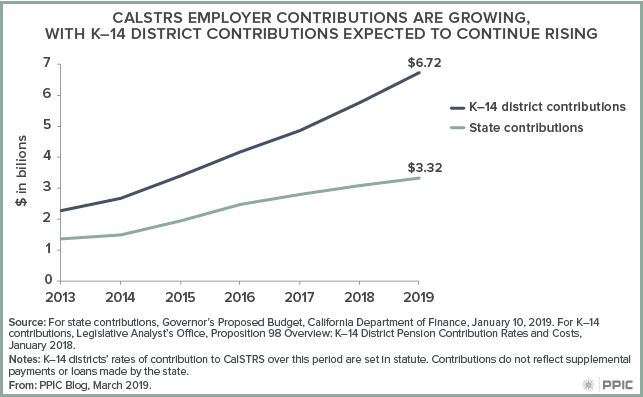 Prior to the end of his final term, Governor Brown anticipated that the court would rule broadly, giving future governors “the option of considering pension cutbacks for the first time in a long time.” Such flexibility would be helpful to policymakers trying to balance budgets should a future recession lead to a drop in revenues.

But the court’s ruling was far more narrow, saying that a pension provision provided by the legislature could later be removed. The provision in question—referred to as airtime—allowed public employees to “purchase” additional years of service for their pension calculations. By paying more into the system, someone with 15 years of service could have their pension calculated as if they had worked 20 years. It turned out this was costing more in future pension payouts than the value paid by the employee for the added years. The legislature ended the practice in 2013 and the court decision affirmed it could do that.

The court went on to say that since this specific benefit was not a “core pension right,” it was not part of an implicit contract with the employee. Treating certain pension benefits as a protected contract is part of a long-standing legal precedent known as the California Rule—a precedent that the court explicitly did not address.

So, what happens now? Two upcoming cases before the court, concerning employees from Alameda and Marin Counties, involve another provision of the 2013 reform that excludes certain kinds of pay (e.g., pay for on-call or standby work) from an employee’s pension calculation. Similar to the CalFire Local 2881 case, the unions maintain that how pay is calculated is part of the pension contract and cannot be changed.

Given the clear distinction the court just made between the airtime provision and the California Rule, it very well might take the same approach regarding the calculation of pay—ruling narrowly on the provision but leaving the bigger question untouched. If that happens, it would affirm the 2013 reform but fall far short of Brown’s vision of being able to reduce pensions outright as part of an effort to balance the budget.