California is poised to send more women representatives to the highest levels of federal government, with vice-president-elect Kamala Harris and the re-election to the House of speaker Nancy Pelosi. Women have represented California in the US Senate since 1993 through Dianne Feinstein, Barbara Boxer, and Harris. And women hold leadership positions across state chambers—Toni Atkins serves as senate president pro tempore, while Shannon Grove and Marie Waldron are senate and assembly minority leaders. In light of these leadership trends, one might expect more women in our state house.

Before the November election, the California Legislative Women’s Caucus stood at an all-time high of 15 state senators and 23 assembly members. Although it is one of the largest caucuses in the nation, California is far from a national leader: at 38 of 120 members, women represent just 32% of state legislative offices. This November representation remains unchanged at 32%, despite the 71 female candidates running for office—or 16 in the senate and 55 in the assembly (senator Holly Mitchell will be transitioning to the LA County Board of Supervisors). While all elections are not finalized, the gender makeup of the California Legislature remains unchanged.

In contrast, neighboring states lead the nation for shares of women elected to state government. Nevada leads with women holding 54% of the state legislature—which is the first time anywhere women have outnumbered men. Colorado follows with 44%, then Oregon at 43%, and Washington at 41%.

California granted women the right to vote nearly a decade before the 19th Amendment passed. Then four women were elected to the state assembly in 1918. By 1924, however, the assembly returned to an all-male chamber and remained nearly without women for the better part of the century.

The largest gains for women in the California Legislature have been in the state senate, where women now hold a third of seats. But the state assembly is larger than the senate, suggesting that women would occupy more assembly seats if the assembly looked like California’s population.

The California Legislature is still far from mirroring the 51% share that women represent as likely voters in the state.  To reach an equal share of women in state government—60 of 120 members—California would need to elect 22 more women. 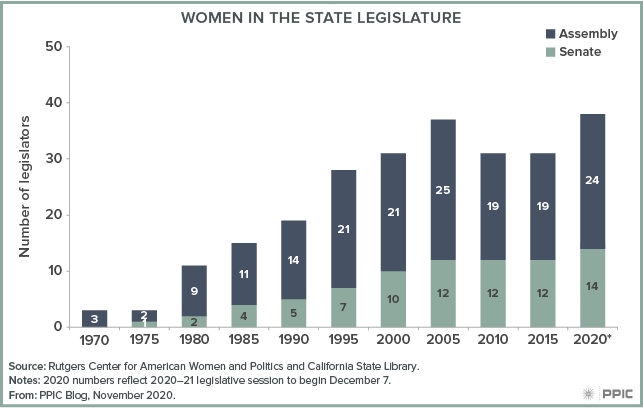 Women at all levels of government bring diverse views on policy; but gender is only one metric for measuring the state’s efforts to reflect the diversity in our state. Improving representation across the legislature ensures policymakers are reaching out to and addressing the issues of a wide range of communities. Despite progress, the Golden State has much work to do to achieve gender equity in the state legislature.

Redistricting and the Changing Demographics of the California Legislature