Hans Johnson May 6, 2021
NEVER MISS AN UPDATE!
Sign up for our blog alerts to receive insights from PPIC by email.

The 2020 census results are in: California experienced its slowest growth rates ever during the 2010s. This slowdown was enough to cause an unprecedented loss of a seat in the House of Representatives. But it is part of a decades-long trend, the consequence of fewer births, more deaths, a slowing of international migration, and—capturing a great deal of attention—a large migration out of California to other states.

Those who move to California also tend to have higher education levels than those who move out—an especially important factor given the state’s strong need for college graduates. Notably, this gain in educated residents is concentrated among young college graduates (generally, adults in their 20s) looking for opportunities as they start their careers. 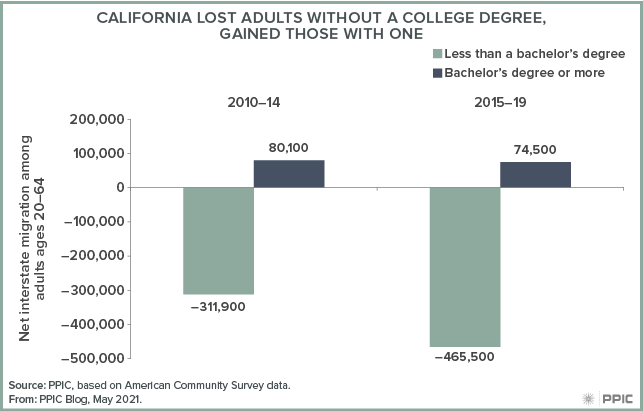 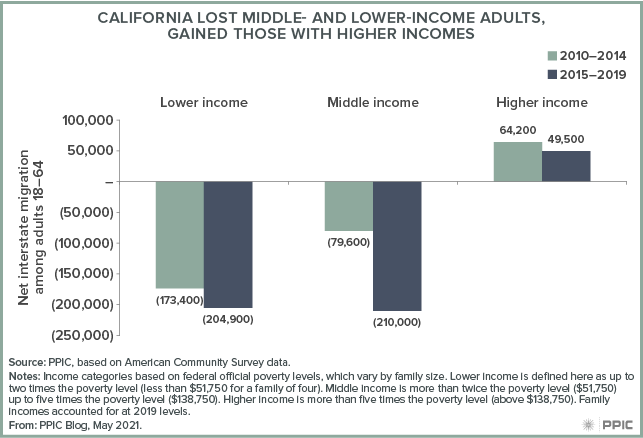 Most people who move across state lines do so for economic or family reasons. The vast majority of adults who left California in the 2010s cited jobs (49%), housing (23%), or family (20%) as the primary reason (according to the Current Population Survey). The PPIC Statewide Survey finds that one-third of Californians have seriously considered leaving the state because of housing costs.

Highly educated, high-income workers are certainly helpful to the state’s bottom line: they contribute to state tax revenue and use relatively few social services. But the larger picture painted by these trends illustrates the economic challenges faced by many lower- and middle-income Californians. The state’s high cost of living, driven almost solely by comparatively high housing costs, remains an ongoing public policy challenge—one that needs resolution if the state is to be a place of opportunity for all of its residents.