In the midst of the COVID-19 crisis, work continues on managing groundwater for long-term sustainability, as required by California’s landmark Sustainable Groundwater Management Act (SGMA). In January, water users in 21 critically overdrafted basins delivered their groundwater sustainability plans to the state Department of Water Resources. In this series, we examine the 36 plans submitted for 11 critically overdrafted basins in the San Joaquin Valley—California’s largest farming region, where excess pumping is a major challenge.

Why are drinking water wells going dry in the valley?

In the San Joaquin Valley, groundwater is the primary source of drinking water. While groundwater levels in the valley have generally been declining for decades, the problem of overdraft—which can cause shallow wells to run dry—is particularly acute during droughts as surface water supplies for irrigating crops are limited. This especially affects domestic wells and small community wells, which tend to be shallower than those used for irrigation or large urban water systems. During the 2012–16 drought, 2,600 well-dependent households reported water shortages across the state; almost 80% of these were in the San Joaquin Valley. We estimate that the valley’s total number of dry domestic wells was likely higher (see map below, on left). Many small community wells also faced shortages.

Does SGMA protect wells from running dry in the future?

SGMA was enacted to address the negative consequences of groundwater overdraft. Declining water levels is one of the six undesirable results that plans must avoid. Local agencies are tasked with setting minimum water level thresholds to avoid effects that are “significant and unreasonable”—something that can vary with local conditions.

Allowing some flexibility is important, because very restrictive thresholds would require immediate and costly cuts in groundwater pumping. Yet in many places, additional water level declines can render shallow drinking water wells useless. If agencies choose to allow continued pumping to avoid major disruptions in the regional economy, they are required to mitigate any significant and unreasonable effects. Options include covering the costs of drilling deeper wells or providing an alternative water supply.

How do groundwater plans address risks to domestic wells?

The plans reflect a range of approaches—as shown in the map below, on the right. In several basins, plans set water level thresholds to protect domestic wells from going dry. Some other plans acknowledge that their thresholds might cause some wells to go dry, and these already have a mitigation program in place or propose considering mitigation in the future. Plans in the remaining basins either do not discuss the potential impacts their thresholds have on domestic wells or do not consider these impacts to merit action. This includes the Kings Basin—home to a dense network of well-dependent communities—where three plans acknowledge that roughly 600 domestic wells may go dry, but do not consider this a significant and unreasonable impact of continued overdraft. 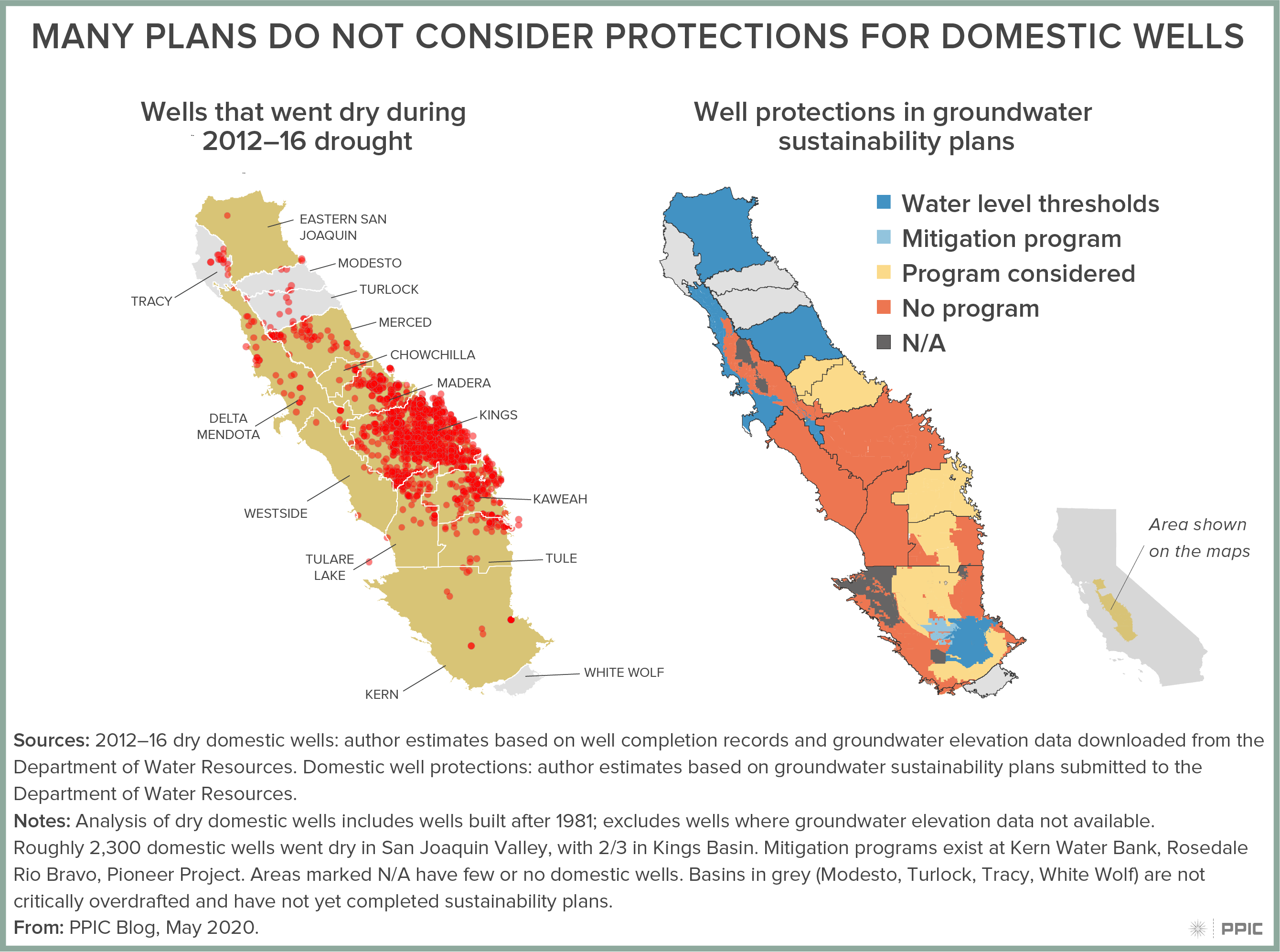 Is mitigation a good alternative?

Chowchilla and Madera basins also have some domestic wells at risk and have conducted economic analyses to compare the costs of two alternatives: rapidly reducing agricultural pumping to maintain higher water levels, or replacing domestic wells that would be affected. At a cost of $25,000 per well, the full costs of replacing affected domestic wells in Chowchilla ($130,000) and Madera ($770,000) are orders of magnitude lower than the costs of reducing agricultural pumping sooner ($581 million in Chowchilla and $968 million in Madera). This shows that it can be more cost effective for a basin to provide assistance to domestic well owners than to set restrictive water level thresholds that would result in large and abrupt losses in the local economy.

Although SGMA doesn’t protect every well from going dry, it does require plans to consider this problem and mitigate significant and unreasonable effects. At a minimum, the state should require that each plan quantify the impacts of its water level thresholds on drinking water supplies.

Increasing community participation in groundwater planning efforts is another priority. And as groundwater sustainability agencies grapple with how to bring their basins into balance over the coming decades, better information will also be key to improving decision making and reducing conflicts. The Department of Water Resources began releasing well records several years ago. The next priority should be improving understanding of which wells are used for drinking water, which wells are abandoned, and other critical information.

Many shallow wells serve economically disadvantaged communities, making the stakes especially high. Because the San Joaquin Valley has a high share of water systems with water quality problems, it’s also important to consider solutions that address both water quality and water quantity whenever possible. In many cases, providing alternative sources of supply may be the best option for affected communities.

Note: The underlying data and additional notes on protection for domestic wells in the valley can be found in Data Set: PPIC San Joaquin Valley GSP Protections for Domestic Wells.