High income inequality, stagnant economic mobility, and persistent poverty raise serious questions about California’s economic future—especially for low-income Californians and communities of color who are bearing the brunt of the current crisis. In a new report that will be released tomorrow, we examine the uneven economic fallout and highlight policies that could promote an equitable recovery.

Long-term trends in income inequality cannot be disentangled from issues of racial equity. A disproportionate share of people of color are at the lower end of California’s economic spectrum. Since 2005, African Americans and Latinos have made up about 60% of people in the state’s lowest-income families, but just over 40% of the total population. During the recovery from the Great Recession, incomes increased across the board, but racial income gaps between white families and African American and Latino families have seen little improvement.

In the current recession, unemployment remained higher for African Americans (15%) and Latinos (12%), compared to Asian Americans (10%) and whites (9%) in early fall (August to October). We also see evidence that more Latinos have left the labor force than other groups. 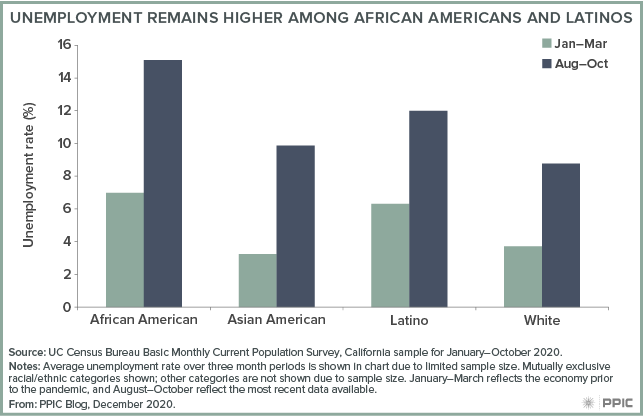 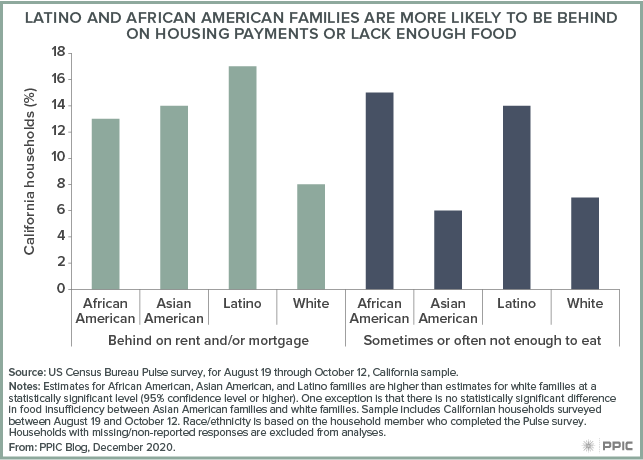 Without deliberate policy action, this uneven economic impact portends a worsening of income inequality and racial disparities. Though state policymakers will likely face heightened fiscal constraints for some time, they still have many options available to promote an equitable recovery. In PPIC’s September survey, six in ten Californians (59%) said the state government should do more to reduce the gap between the rich and the poor.

To promote short-term recovery, support for job growth, business relief, and consumer spending should focus on the hardest-hit sectors, households, and regions. Safety net programs like unemployment insurance, CalFresh, and CalWORKs can provide an immediate backstop—largely federally led—during the recession and early stages of recovery. However, state intervention that goes beyond existing programs will be needed to fully stabilize the economic circumstances of undocumented workers and their families. Estimates suggest that as many as one in ten California workers are undocumented.

To be effective, policy solutions will need to address the barriers perpetuating longstanding racial, socioeconomic, and regional disparities in health, employment, education, and housing. Ensuring that corrective policy actions reach communities that have historically been subject to underinvestment, especially low-income communities and communities of color, is an important first step. Tune into our virtual event at 11 am PT tomorrow, December 8, to learn more about how California policymakers can lay the foundation for an equitable recovery.

This week, our blog is focusing on income inequality and economic recovery. Tomorrow, we take a close look at the disproportionate impact of the current crisis on women.