The state legislature recently passed a $15 billion bond measure to fund upgrades to education buildings and facilities. Voters will decide whether to support this bond as part of the March 2020 primary ballot.

The legislature will approve specific projects as part of the annual budget process. As a condition of making funds available, the bill requires UC and CSU to develop affordable housing plans for their students. 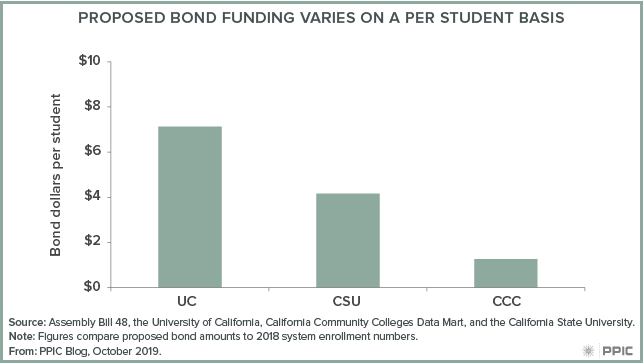 The last time the state proposed and passed a ballot measure supporting higher education was more than a decade ago. Proposition 1D (2006) passed with almost 57% support. The total amount of funding for higher education in that initiative was about half of what is proposed in the current measure ($3.1 billion compared to $6 billion). 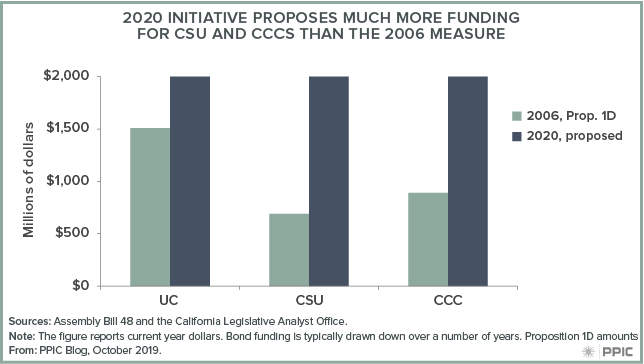 During the Great Recession funding for UC, CSU and the community colleges fell. One of the ways the systems responded was to defer maintenance on buildings, foregoing repairs and upgrades as a way to save money in the short run. Our estimate of the cost of addressing the resulting backlog of capital projects tops $30 billion for the UC and CSU systems. The proposed ballot initiative would provide bond authority to cover a little more than 10% of that.

We know that bond measures for education generally have the support of voters, and recent PPIC polling suggests that a $15 billion education bond has a slim margin of support. Time will tell whether voters will be persuaded this time around.