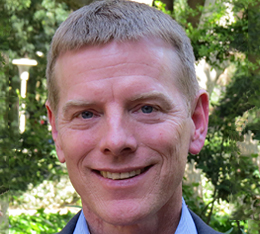 As California’s latest fast-moving drought accelerated earlier this year, California governor Gavin Newsom called on residents to participate in a 15% voluntary reduction in water use in July. Unfortunately, Californians haven’t yet achieved the savings he requested. In September, for instance, statewide water use in cities and towns fell just 3.9% compared with the same month last year, and overall savings between July and October were just 5.6%. Some recent encouraging news showed the beginning of a shift, with water savings in October reaching 13%.

Still, there’s been some concern that residents are backsliding around water conservation, especially compared with the last major drought, when average savings ultimately reached nearly 25%. But the data show a more nuanced picture, which may be useful to examine more closely as California confronts a possible third year of drought.

Not our first drought rodeo

During the 2012-16 drought, then-Governor Brown also initially called for voluntary savings, and water use declined by 11% statewide between June 2014 and May 2015, compared to the same months in 2013. But as drought conditions progressed, he ordered a statewide conservation mandate—and the State Water Board set mandatory savings requirements for all urban water suppliers.

So far, the Newsom administration has taken a more tailored approach, allowing water agencies themselves to assess the ability of their supplies to meet demands, and to take actions in line with their local conditions. And what the data show is that agencies that have reported that they’re facing bad conditions have already conserved a lot of water since last year—in some cases, exceeding the 15% cut the governor requested. These agencies are in regions that have been hit hardest during the current drought: the North Coast and the Bay Area (Figure 1). A similar pattern emerged during the voluntary conservation phase of the last drought, when agencies facing worse conditions pushed for more aggressive savings. 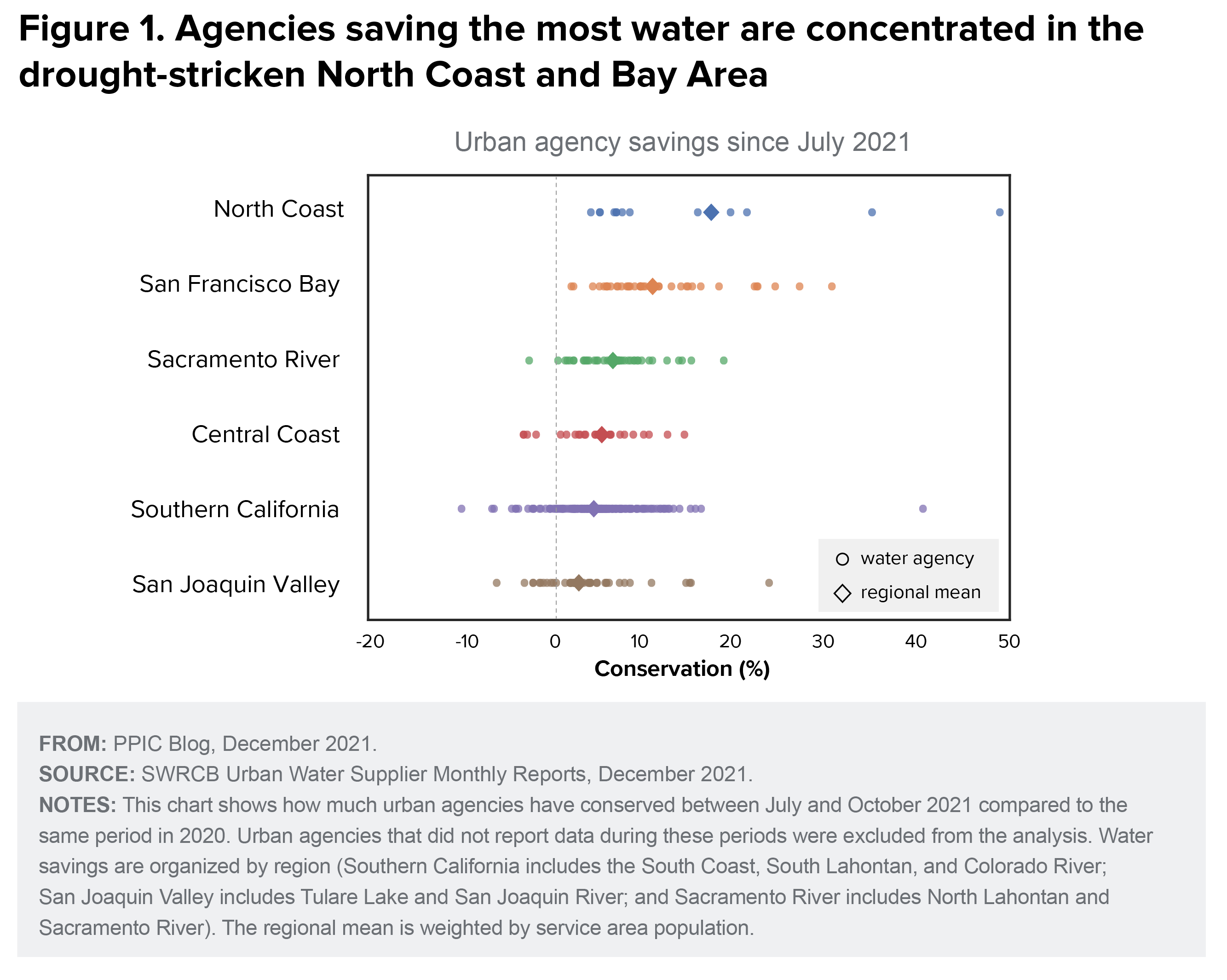 There are also some compelling reasons why water agencies may have struggled to achieve the kinds of savings they did during the last drought. For one thing, there’s the issue of getting the public’s attention. In a year that’s seen a surfeit of major news stories, the drought simply hasn’t registered in the public consciousness in the same way the previous drought did.

Following Governor Brown’s January 2014 drought emergency declaration, water and drought rapidly rose in public consciousness—by March of that year 15% of Californians ranked water and drought as the most important issue facing the state, and this share rose to nearly 40% after he announced mandatory conservation in April 2015 (Figure 2). In 2021—when drought conditions were similar to those in 2014—drought hasn’t even hit the top five concerns. The ongoing global pandemic, coupled with issues around housing, wildfires, and the economy, seem to have left little room for the drought in people’s minds. 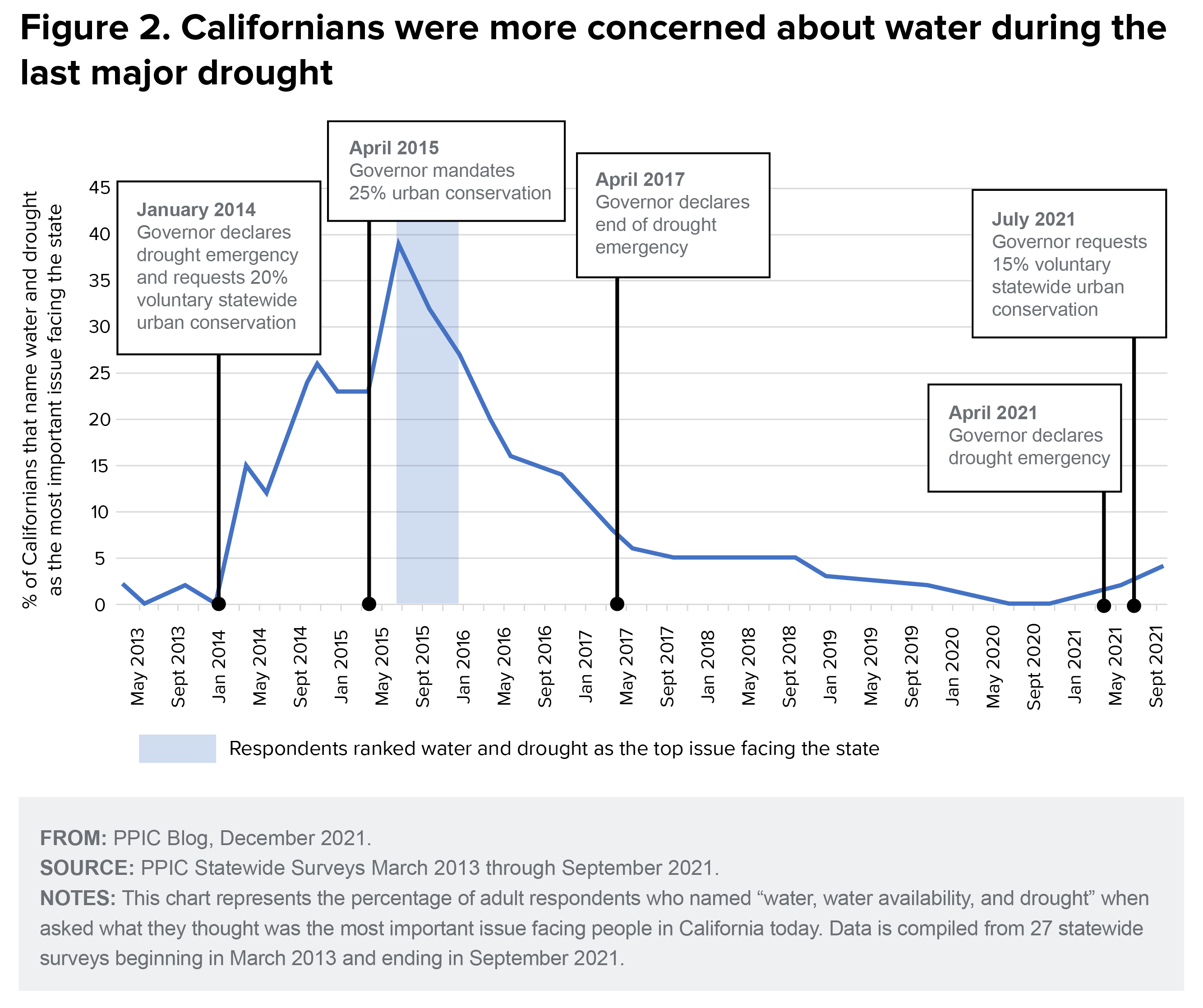 Secondly, most water agencies are starting from a vastly different baseline of water usage than where they were early in the last drought. Water usage dropped a lot by late 2015, and for most communities, many of those savings have stuck (Figure 3). Over a third of the state’s agencies are using at least 15% less water than they did in 2013, and 71% of agencies are using at least 10% less. That has made achieving water savings more difficult for some agencies during the current drought because per capita usage is already low, and many of the easier water-saving adjustments have already been adopted. 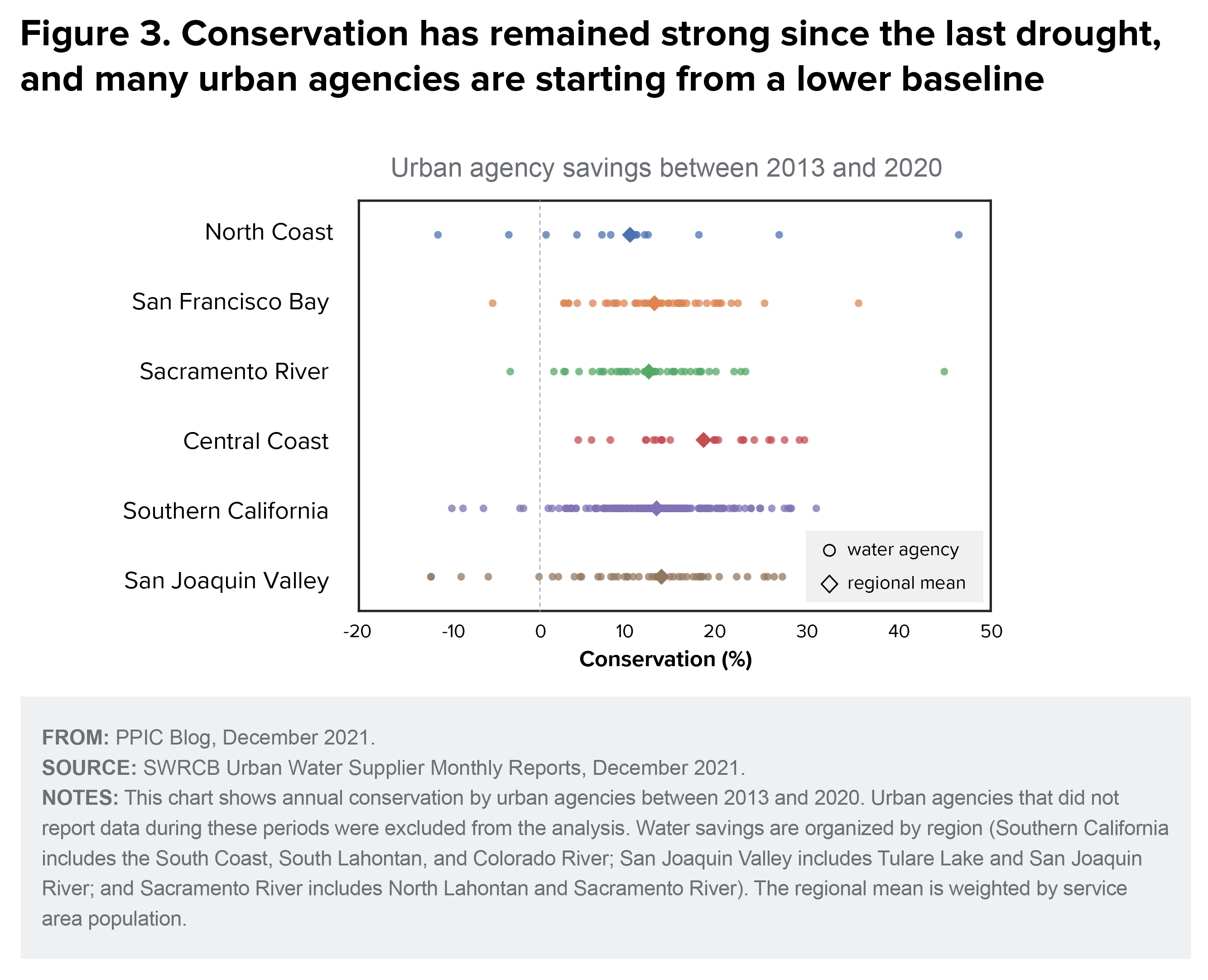 It’s also important to note that the summer of 2021 was the warmest on record. This affected agencies with more outdoor use—particularly inland agencies, where temperature shifts and impacts on demand are larger.

Finding the right approach if the drought continues

As a possible third year of drought looms, we’re already seeing signs of change: two of the largest urban water wholesalers in the state, Metropolitan Water District and San Francisco, announced drought emergencies last month. The state is also adopting stricter conservation measures, like the proposed ban on some wasteful outdoor water uses, and signaling the potential for conservation mandates if this winter’s rains do not materialize.

While we don’t yet know what the winter skies will bring, it’s clear that the state and local agencies will need to work together to manage a third year of severe drought. Now is the time to keep watching, while preparing to take swift action in the early spring. Aligned state and local action and messaging could help cut through the noise of increasingly congested news cycles.