Last month’s atmospheric river brought much-needed precipitation to California, which has been in the grip of the second-driest and third-warmest two-year period on record. It was a balm to the drought-stricken state, and more than 600,000 acre-feet have arrived in the state’s major reservoirs, but are our worries over? In a word, no.

California remains in a historic drought. We ended the 2021 water year in conditions similar to the end of 2014, year three of the last major drought. Future scenarios for the 2022 water year—shown in the figure—demonstrate that we’ll need a generous year of rainfall to move the drought needle out of the danger zone. If dry conditions persist, as they did in 2015, drought impacts will be amplified. Even an above-normal water year won’t take us out of drought: in 2016, for instance, we were able to fill up our reservoirs, but drought conditions persisted because reservoir managers made conservative decisions on water releases to avoid taking more risks. Only a wet year like 2017—or like 1978, which followed the driest two-year period on record and mirrors current conditions—will relieve the drought stress, although we could still see some persistent drought impacts in freshwater ecosystems and overdrafted groundwater basins. 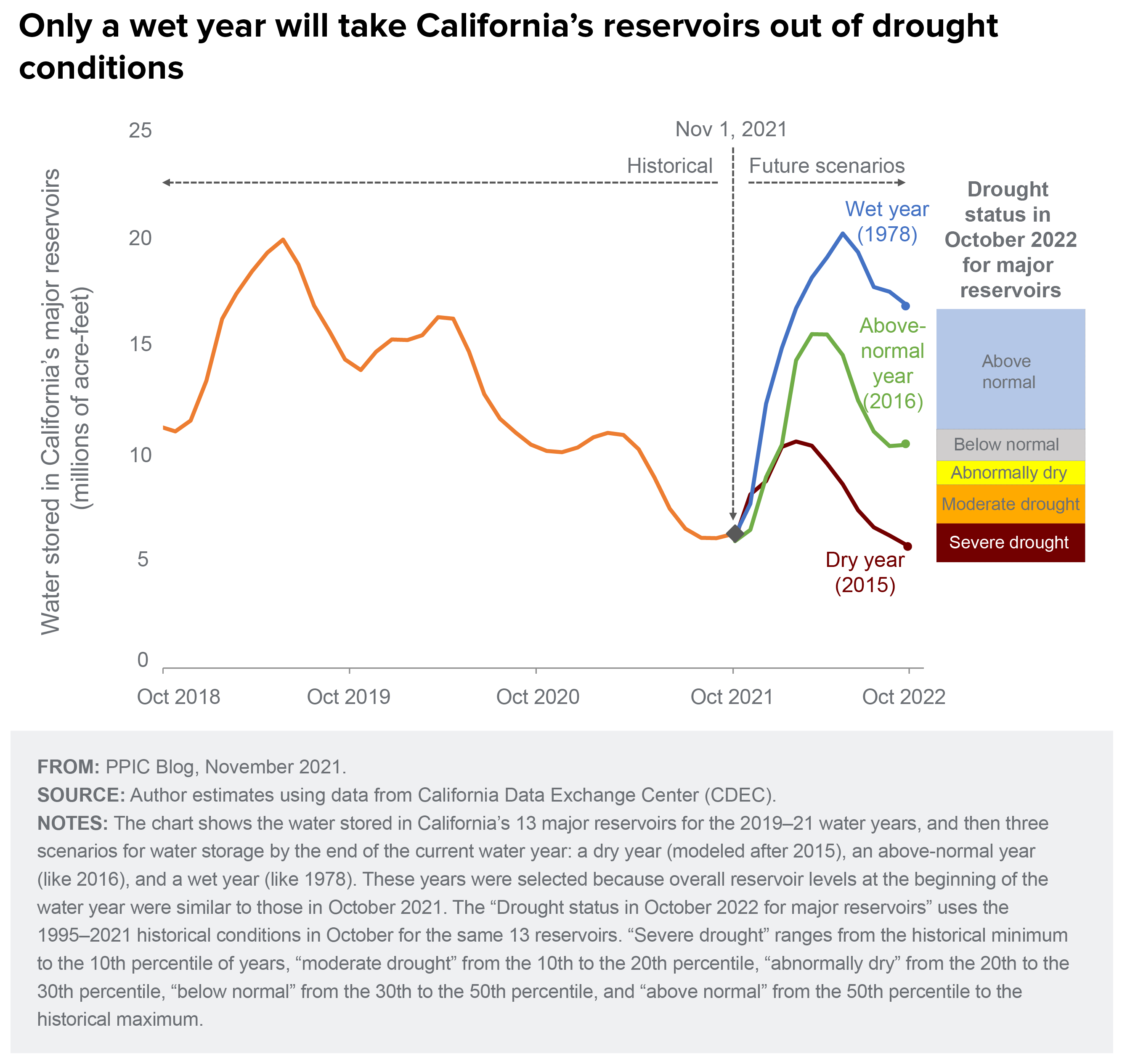 We’re here in part because the most recent drought has been so fast-moving. In the 2012–16 drought, it took more than three years for reservoir levels to drop to extreme drought levels. In the current drought, that drop took less than two years—reflecting the especially dry conditions in Northern California, where most major reservoirs are located. Climate change is exacerbating drought intensity: conditions deteriorated rapidly this summer, the hottest on record.

The conditions in the Sacramento River watershed are critical not only for the region itself, but also for Bay Area and Southern California cities and the San Joaquin Valley farms served by the Central Valley Project and the State Water Project. Water allocations from these projects were set to just 5% for SWP contractors and as low as  0% for some agricultural contractors of the CVP. One consequence is reduced crop acreage; for instance, around 110,000 acres less than in 2020 were planted—mostly rice and cotton—given the dry conditions, and anecdotal reports suggest both acreage and yield declines for other crops from reduced water deliveries and heat stress. While there will be some costs, overall agriculture has proven fairly resilient. The real question is what happens next year.

The reduction in surface water supplies has also spurred more groundwater pumping, accelerating declines in groundwater levels that occur naturally during droughts: almost a thousand drinking water wells have been reported dry, leaving residents of some low-income rural communities without water running through their taps.

In general, cities have dealt with the drought so far without major problems, reflecting significant past investments in drought preparedness, including water storage. Notable exceptions include communities in the normally wetter North Coast—including Marin, Sonoma, and Mendocino—and a few others throughout the state where severe drought restrictions are now in force.

Finally, freshwater ecosystems have been acutely affected by the drought. Low streamflows and high water temperatures in the Sacramento Valley and North Coast have caused severe stress to salmon and other endangered species.

As Californians eye the skies and hope for more rain, we also need to take immediate actions to minimize social, economic, and environmental risks if the drought continues into 2022. In our latest report, we highlight a few short-term priority actions, including lessening the negative impacts of increased groundwater pumping, identifying drinking water systems at risk of shortages and taking rapid action, and managing reservoirs more conservatively to ensure essential flows are available for the environment.

Despite recent rainstorms, it’s important to remember that we’re still in a drought—and we may face yet another year of extreme conditions. We must be prudent in how we manage our water: hoping for the best, but preparing for the worst.

Last Week’s Storm: the Good, the Bad, and the Inconclusive