Are Voters in the Mood to Recall Their Governor?

As a recall of Governor Gavin Newsom looks ever more likely, proponents and replacement candidates face an uphill battle to reach the majority needed to remove him from office. The May PPIC survey finds that 40% of California likely voters say they would vote yes to remove Newsom as Governor if a special election were held today. This is unchanged from the 40% who said this in our March survey. While the state’s Democratic leanings drive much of the current opposition to the recall, voter expectations also play a critical role. And in 2021, the voters’ mood is very different from what it was in 2003, during the successful recall of Governor Gray Davis. 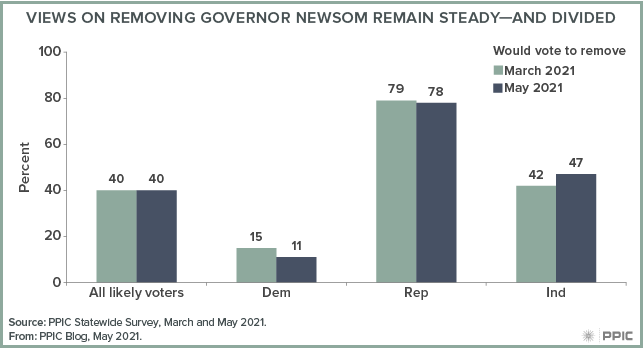 What do voters expect a recall to do? In 2003, many expected it to make things better. In our August 2003 survey, 47% of likely voters said that things would get better if Davis were removed from office, while 17% said that things would get worse. This trend was replicated in the September 2003 PPIC Survey—and in the October 7, 2003 recall election, 55% voted to remove Davis and 49% voted to replace him with Arnold Schwarzenegger. 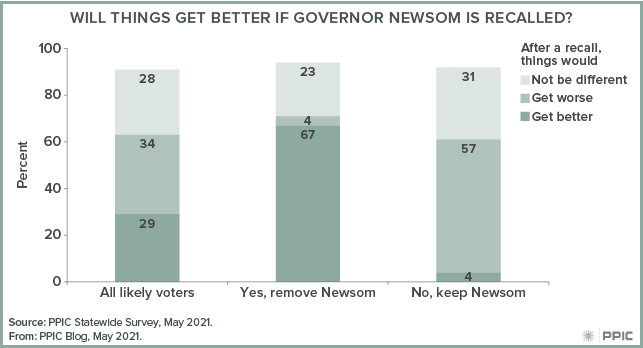 Moreover, replacement candidates face political headwinds as they try to convince the voters that they will offer a better future than Newsom. We continue to find that a majority of California likely voters approve of the way that Newsom is handling his job as governor (54% May PPIC Survey, 53% March PPIC Survey, 52% January PPIC Survey). The partisan breakdown of these ratings reflects the state’s hyper-partisanship: most Democrats approve and most Republicans disapprove, while many independents lean Democratic and approve of the governor. In this context, supporters of a recall have their work cut out for them.

Still, timing is everything in politics, and it is important to keep in mind that our survey asks Californians how they would vote if the recall election were held today. The 2021 special election is most likely to occur in late fall. The public’s views on COVID and the economy could sour by then or be preempted by discontent over new crises such as wildfires or electricity blackouts.

A governor’s recall is very rare but the citizens’ initiative—a frequently used tool in California’s direct democracy process—offers clues to how voters react when asked to make major changes through the ballot box. The burden of proof is on the proponents to make the case that a “yes” vote will make things better and not worse. The history of initiatives tells us that voters are risk averse and more often choose to vote “no” as the default option. Right now, the majority of California likely voters are not in the mood to alter the status quo—but the PPIC Statewide Survey will be monitoring public opinion to see which way the political wind is blowing as this hopeful spring gives way to the summer and fall.