Five Takeaways on the 2021 Governor’s Recall

Signature verification is underway in the process to recall Governor Gavin Newsom. It is widely believed that more than enough valid signatures will be found to trigger the second governor’s recall in the state’s history. In the March PPIC Statewide Survey—our first reading on public support for this effort—40% of California likely voters say they would vote yes to remove Newsom as governor. These early numbers are remarkably similar to the 38% who voted against Newsom in November 2018. Here are five key takeaways about public support for the 2021 governor’s recall, based on PPIC surveys:

The partisan divide matters. Partisans are deeply divided when asked if they would vote yes to remove the Democratic governor. Among likely voters, 79% of Republicans would vote yes compared to 15% of Democrats. Fewer than half of independents (42%) would vote yes—consistent with their Democratic leanings. This partisan divide mirrors the findings in California exit polls in the November 2018 election. Democrats currently have a large advantage over Republicans in voter registration, which explains why recall support falls well short of the majority needed to remove the governor. 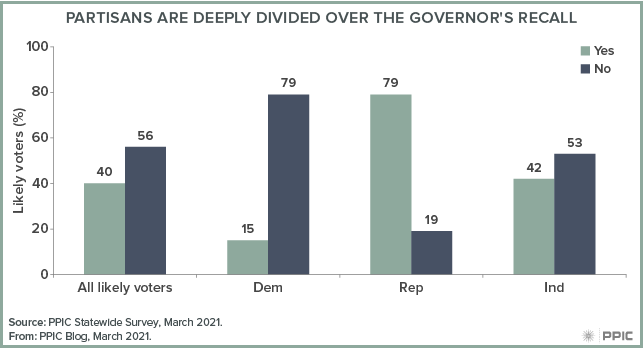 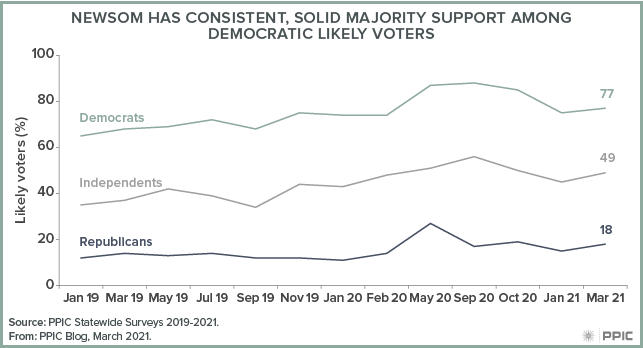 Improvements in pandemic trends do, too. Most California likely voters (47%) named COVID-19 as the top issue for the governor and legislature to work on in 2021, according to our January survey. In our March survey, 79% say the worst of the outbreak is behind us—a big improvement from January (59%). Moreover, 45% now say that the state government is doing an excellent or good job in vaccine distribution—a significant jump in positive perceptions since January (28%)—while 20 percent say a poor job (down from 34%). Californians’ satisfaction with the state’s COVID response—and the pace of reopening of schools and businesses—is likely to determine the fate of the 2021 recall. In sum, pandemic trends will have political impacts as well as social and economic consequences.

The political wildcard in the 2021 governor’s recall is the replacement candidates. In 2003, 135 candidates ran to replace Davis and four of them received at least 1% of the vote. But it was the surprise entry of action movie star Arnold Schwarzenegger that changed the election’s dynamics. Currently, a few candidates have indicated their desire to run in 2021 but none have the qualities of Arnold Schwarzenegger or the statewide electoral track record of Gavin Newsom. Will a charismatic leader appear who has the name recognition and sufficient resources to mount a successful statewide campaign?

The PPIC survey will be monitoring Californians’ preferences in a year when our state’s system of direct democracy will likely face its next big test—every registered voter receiving a ballot in the mail and being asked to make a choice between keeping the status quo or changing course.