Niu Gao, Patrick Murphy February 27, 2018
NEVER MISS AN UPDATE!
Sign up for our blog alerts to receive insights from PPIC by email.

Recent reforms in educational standards—including the Common Core math standards and the Next Generation Science Standards—have altered the expectations placed on California’s teachers. Other changes, such as requiring college prep courses for high school graduation, will further increase the demand for math and science teachers. The state’s teacher workforce has already changed significantly in the past 15 years, but it will need to further evolve to meet the demands of the future.

These are a few of the challenges ahead: 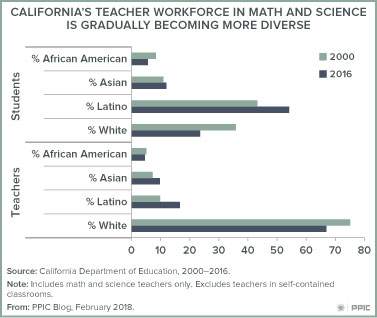 As California’s schools continue to implement new math and science standards, the challenge of developing a larger and more diverse teacher workforce will loom large. There are examples of efforts both in California and in other states designed to address some of these challenges. For example, Call Me MISTER in South Carolina aims to recruit college students to increase the incoming teacher pool, while other programs—like Boston Public Schools’ High School to Teacher Program—reach out to students in high schools. In addition, some programs focus on recruiting members of the local community (e.g., Teach Tomorrow in Oakland, the San Francisco Teacher Residency program, and the Grow Your Own programs in Illinois).

These initiatives represent potential models, but they would need to scale up quickly to address the challenges ahead. PPIC’s ongoing research into the implementation of the Next Generation Science Standards suggests that the high demand for quality science teachers is an emerging implementation concern.