As California moves closer to a Stage 2 re-opening—and many parents begin returning to jobs—school districts will need to specify when and how schools will bring students back to class safely. Several countries across Asia and Europe have already begun re-opening schools. Following the progress of these examples can help identify pathways forward for California.

Because of the need to practice social distancing, California schools may not have the physical capacity to welcome all students at the same time. If districts move ahead with elementary schools first, then 58% of schools will be able to re-open, constituting about half of the state’s public school students. If high schools open first—about 16% of California schools—then only 30% of students will return.

Transportation is another issue because 1.1 million students, or 18%, rely on school buses to get to and from school. To safely transport these students, districts must reduce bus seating capacity, implement a seating chart, and ensure six-foot distancing while loading and unloading.

Teachers with health vulnerabilities could opt to continue online instruction as could parents concerned about their children’s health risks. Even if students return in stages, a return to full-time in-class instruction is unlikely. 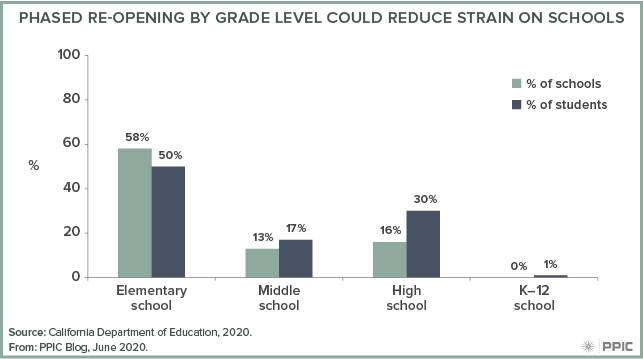 Japan and several cities in China were among the first to re-open schools in late March and early April, followed by Singapore, South Korea, and Hong Kong in May. In those countries, schools invited graduating seniors back first; middle and elementary students followed weeks later. Many European countries took the same approach: Germany, Austria, Portugal, and Greece prioritized students facing year-end exams—especially grades 11 and 12.

However, some European countries took the opposite approach: Denmark, Norway, The Netherlands, and Switzerland brought back preschools, kindergarteners, and primary students first, noting the need for parents to return to work and the greater challenges younger children face with distance learning.

In France, whose planned rolling return by grade level extended through May, high-school students were slated to continue distance learning for the remainder of the school year. The hardest-hit countries in Europe—Italy, Spain, and the United Kingdom—planned to keep schools closed until September.

While these countries employed a variety of strategies, their plans typically involved dividing classes in halves or thirds and staggering attendance days—which required some measure of continued distance-learning for all students even after schools re-opened—and enforcing frequent handwashing.

Schools across California are preparing buildings for a safe reopening, but additional costs come just as the state enters the worst recession since the Great Depression. Districts have urged both the federal and state governments to provide more resources—many districts had already faced budget challenges, and with the pandemic, resources are even more strained.

Providing adequate COVID testing, securing personal protective equipment such as face masks, and coordinating efforts to isolate and contact trace in case of infection are vital efforts the state can make to support school districts. Along with keeping students in small groups and staggering which classrooms are occupied, these precautions are consistent with recent guidelines issued by the California Department of Public Health and with the California Department of Education recommendations recently presented by Superintendent Thurmond.

Do Schools Have Enough Nurses to Fight the Pandemic?