The state recently released a new four-tier, color-coded reopening framework. Schools in the purple tier (“widespread”) cannot open their campuses for in-person instruction without a waiver, which only applies to elementary schools. Thirty of the state’s counties are in the “widespread” tier. Once a county moves to the red tier (“substantial”) and remains there for two weeks, schools can bring students back in person, provided that they follow the state’s guidance.

As of September 18, the state had approved 550 (out of 557) waiver applications from 28 counties (full list below). More than a third of the waivers are from Orange and San Diego Counties. The vast majority of the approved applicants are private schools (512, or 93%), while 38 are from public schools (9%). The private schools serve an average of 137 students in K–6 grades, while the public schools serve an average of 252. 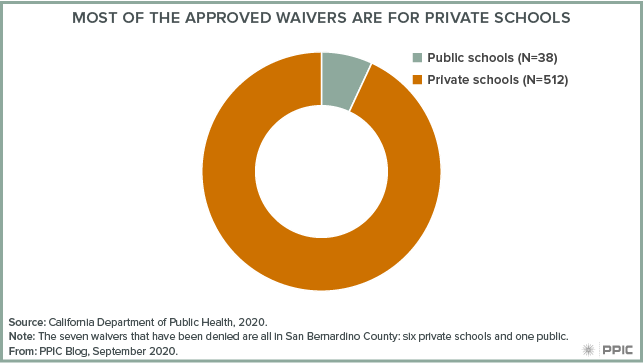 The prospects for a school’s reopening are closely tied to the resources it is able to muster. The requirements for personal protective equipment (for students and staff), the increased staff levels needed for instructing smaller cohorts, and the sheer availability of space for distanced in-person learning all necessitate extra expenditures, or an existing wealth of resources. So there is widespread concern that students in disadvantaged communities may be left behind. Statewide roughly 7 percent of students are enrolled in private schools, which tend to be smaller, enroll more white, affluent students, and have smaller classes.

Extended school closures are associated with negative effects on student engagement, social-emotional wellbeing, and psychosocial health, as well as academic performance. Ultimately, the impact of the pandemic will depend on the speed with which the transmission of the virus can be controlled in the general population. If schools are to reopen before then, they will require considerable resources and support to do so safely. 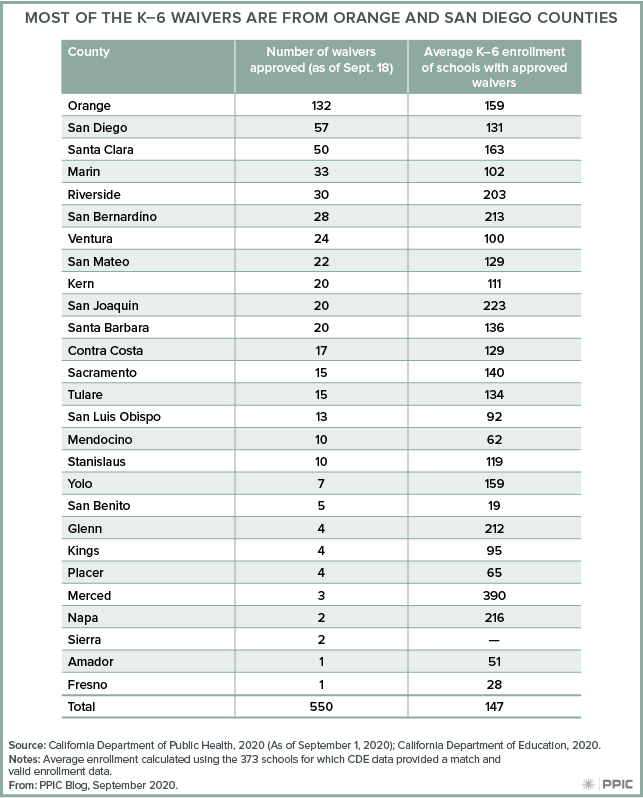