The pandemic and recession have highlighted inequities in our state and the importance of a college degree. College graduates have fared much better than other workers, as they are more likely to be employed and able to work remotely. Over the long run, demand for highly educated workers has been growing and California faces a projected shortfall in workers with college degrees—a gap that has threatened to stall economic progress and leave Californians unprepared for the evolving job market.

The good news is that educational attainment is on the rise. In 2019, 34% of California adults 25 and older had at least a bachelor’s degree, compared to 30% in 2009. California is now on track to close the degree gap, which means more Californians can now take advantage of the higher wages and other benefits that often come with a college degree.

Encouragingly, educational attainment rose in the vast majority of California counties. However, progress has been uneven across the state. Bay Area counties had the largest increases in attainment, while rural counties were more likely to see declines.

Progress in educational attainment is due to several factors. First, in response to strong student demand and the need for more college graduates, the state provided additional funding for enrollment at California State University (CSU) and the University of California (UC). Both systems have also successfully implemented programs to increase student persistence and completion. As a result, the number of bachelor’s degrees awarded at CSU and UC jumped from 121,000 in 2009–10 to 172,000 in 2019–20. Together, CSU and UC have awarded almost 800,000 bachelor’s degrees in the past five years.

Migration is another driving force. Recent immigrants to California are increasingly likely to arrive with college degrees. And in recent years, California has mostly gained large numbers of college graduates from other states while losing even larger numbers of people without bachelor’s degrees. From 2010 to 2019, California attracted almost 400,000 more college graduates from other states than it lost.

Local labor market trends have also contributed to uneven growth in educational attainment, as people move to take advantage of job opportunities. For example, the Bay Area and coastal Southern California tend to attract highly educated young adults moving from abroad and other states. At the same time, high housing costs push many residents without college degrees out of coastal areas, with large numbers moving to inland areas of California and out of the state.

While educational attainment rose for all racial/ethnic groups, large equity gaps remain. From 2009 to 2019, attainment increased by 6 percentage points for whites and Pacific Islanders, 5 points for Asians and African Americans, 3 points for Latinos, and 1 point for Native Americans. Considering attainment rates among Asians and whites in 2009 were already about 20 percentage points or more higher than among underrepresented groups, these disparities are troubling. In some cases equity gaps have actually increased, both statewide and at the county level; this is true even among counties that have seen high overall growth in attainment. 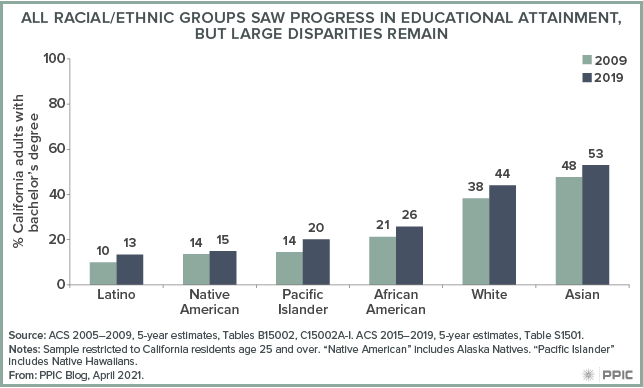 The drivers of change in educational attainment are complex, and progress is a long-term endeavor. Efforts to improve access, transfer, and completion at California’s community colleges, CSU, and UC have played a big role in improvements to date. Yet geographic and racial disparities indicate that ongoing and future investments and reforms must pay close attention to communities where opportunities have been few and far between.