Testimony: California Is on Track to Close the Degree Gap

Hans Johnson, director and senior fellow at the PPIC Higher Education Center, testified February 25, 2020, before the Assembly Budget Subcommittee (No. 2) on Education Finance, chaired by Assemblymember Kevin McCarty. Here are his prepared remarks.

At the PPIC Higher Education Policy Center, we have long been concerned about the future of California’s workforce. Would the state have enough college graduates to meet evolving economic demands? We have produced a series of reports addressing the dynamics of this issue.

Five years ago, we projected a shortage of highly educated workers in California. Specifically, our economic projections to 2030 showed that about two in five jobs would require at least a bachelor’s degree, while demographic projections suggested that only about one in three Californians would attain this level of education. This shortfall amounts to 1.1 million bachelor’s degrees.

PPIC noted that to fill this shortfall, the state and its higher education systems would need to act—increasing access, transfer, and completion especially among groups historically underrepresented in higher education, including low-income students, first-generation college students, Latinos, and African Americans.

We identified ambitious targets that—if met—would close the degree gap. Those targets included large increases in access to the University of California (UC) and California State University (CSU), both for first-time freshmen and for transfer students. They also included substantial increases in graduation rates. At the request of the legislature, UC and CSU both issued reports on how they might meet those targets.

Today, I’m pleased to say that California is currently on track to close the gap. The concerted efforts of policymakers, higher education officials—including staff and faculty—and, of course, students have led to these early gains.

State General Fund allocations for each system have increased substantially since the Great Recession, allowing for increased enrollment and renewed efforts to improve student persistence and completion. Both UC and CSU have exceeded PPIC’s closing-the-gap targets. These early gains have reduced the degree gap by almost 80,000. 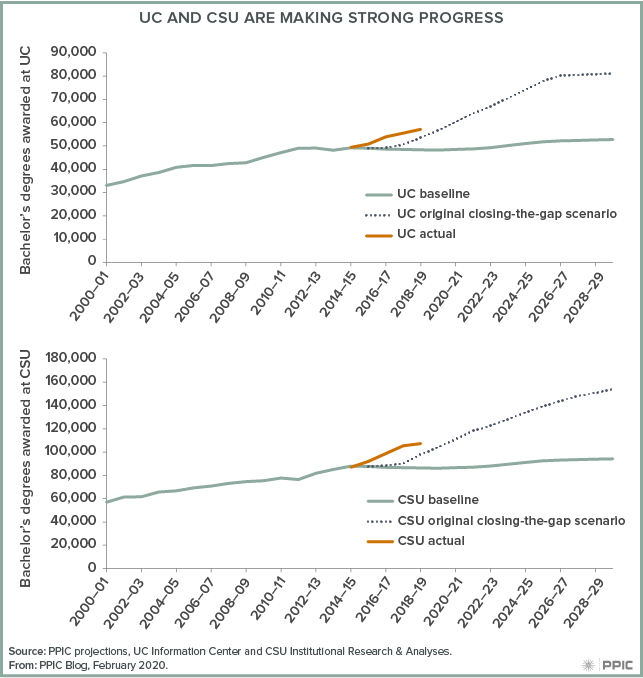 Two primary actions have led to these gains. 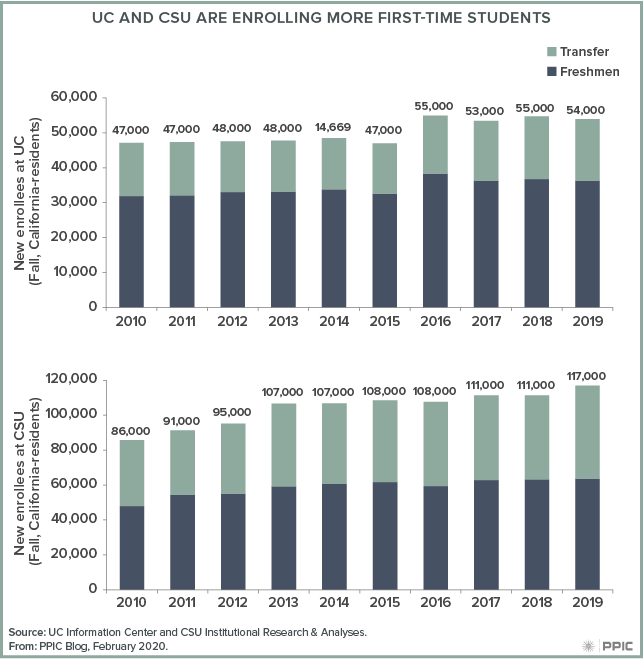 These early successes are very promising. Still, California needs to build on them if it is to close the degree gap fully. The demand for college remains high. PPIC’s statewide surveys show that the vast majority of parents (79%) want their child to earn at least a bachelor’s degree. College preparation among high school graduates has increased, with the share of students completing the college preparatory requirements of UC and CSU now at an all-time high. And while applications to UC and CSU have levelled off or even declined a bit recently, application levels are still near record highs. All but one UC campus and many CSU campuses already do not have room to admit all eligible applicants.

Looking ahead, strong demand for UC and CSU is likely to continue as college preparation improves and the transfer pathway becomes more efficient and effective. New initiatives, including reforms in remedial education at the community colleges and CSU, have the potential to substantially improve student success rates and boost transfer. New articulation agreements, such as the Associate Degree for Transfer, have streamlined the pathway from community colleges to four-year colleges, especially CSU. (PPIC will be issuing a report on transfer trends later this year.) And an increased focus on improving student outcomes has led to multiple substantive reforms designed to increase persistence and completion at UC and CSU.

Finding ways to accommodate all eligible students is a pressing challenge, but one that must be met in order to ensure a better future for all Californians. Through thoughtful planning—and yes, additional funding—closing the degree gap is possible. Improving access and completion is a necessary and critical component to ensuring that more low-income, first-generation, and underrepresented students enjoy the benefits of a college degree. The early progress I’ve highlighted here has led to greater access and success for underrepresented students, creating momentum to improve the wellbeing of all Californians.