Deja Thomas June 8, 2021
NEVER MISS AN UPDATE!
Sign up for our blog alerts to receive insights from PPIC by email.

For the LGBTQ+ community, June marks Pride Month—a celebration of love, diversity, and acceptance. Historically, the community chose the month of June to commemorate the Stonewall Riots, an event that began to raise awareness about LGBTQ+ issues and rights. With the 2021 Equality Act—a bill which would prohibit discrimination based on sexual orientation and gender identity—awaiting a decision by the Senate, PPIC asked Californians in our May Statewide Survey how they perceive these civil protections.

An overwhelming majority of adults (71%) and likely voters (70%) support the 2021 Equality Act, while a quarter or fewer oppose it. At 88%, Democrats are most likely to express support, followed by 64% of independents and 41% of Republicans. Strong majorities across racial/ethnic groups are supportive as are Californians ages 18 to 34, who are somewhat more likely than older Californians to express their support. Around the state, we find that more than six in ten across regions support for the bill. 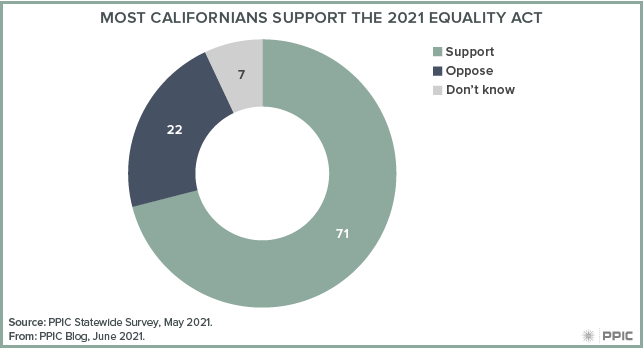 Higher shares of Asians Americans and whites compared to Latinos and African Americans say society has not gone far enough in accepting transgender people. And younger adults are more likely than older adults to agree with this belief, as are those with higher incomes. Across regions, Californians in the San Francisco Bay Area (43%) are the most likely—and those in the Inland Empire are least likely (27%)—to say society has not gone far enough. 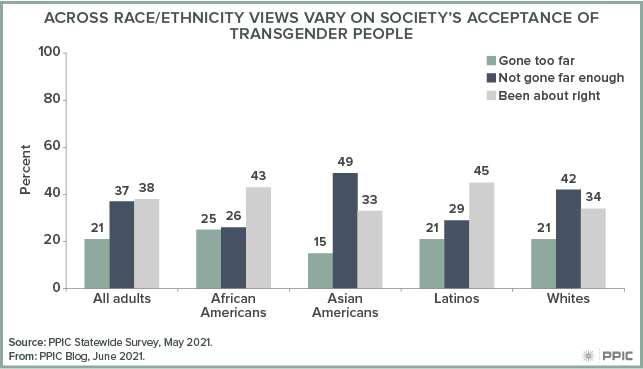 The contributions and challenges of the LGBTQ+ community continue to gain traction as vital topics for California and the nation, and policymakers are engaging with LGBTQ+ issues. The PPIC Statewide Survey will be tracking Californians’ attitudes on gender equality, transgender rights, and related issues as well the steps the government may be taking in these areas.