In July 2021, for the first time ever, the Census Bureau initiated a series of nationwide surveys that included questions about sexual orientation and gender identity. The results are notable, especially for California. Our state has the largest lesbian, gay, bisexual, and transgender population—2.7 million—in the nation; Texas is second with 1.8 million. (The Census Bureau asked about these four identities only, therefore LGBT is the acronym used in this post.) As Pride Month draws to a close, let’s consider some key facts about California’s large and diverse LGBT population.

California’s share of adults who identify as LGBT (9.1%) is considerably higher than the share in the rest of the nation (7.9%). It is also higher than that of any other highly populated state. Among the ten most populated states, Texas is second (8.4%) and New York is third (8.2%); North Carolina has the lowest share (6.3%). Among all states, Oregon has the highest LGBT share (12.3%), while Mississippi and South Dakota have the lowest (5.0% each). 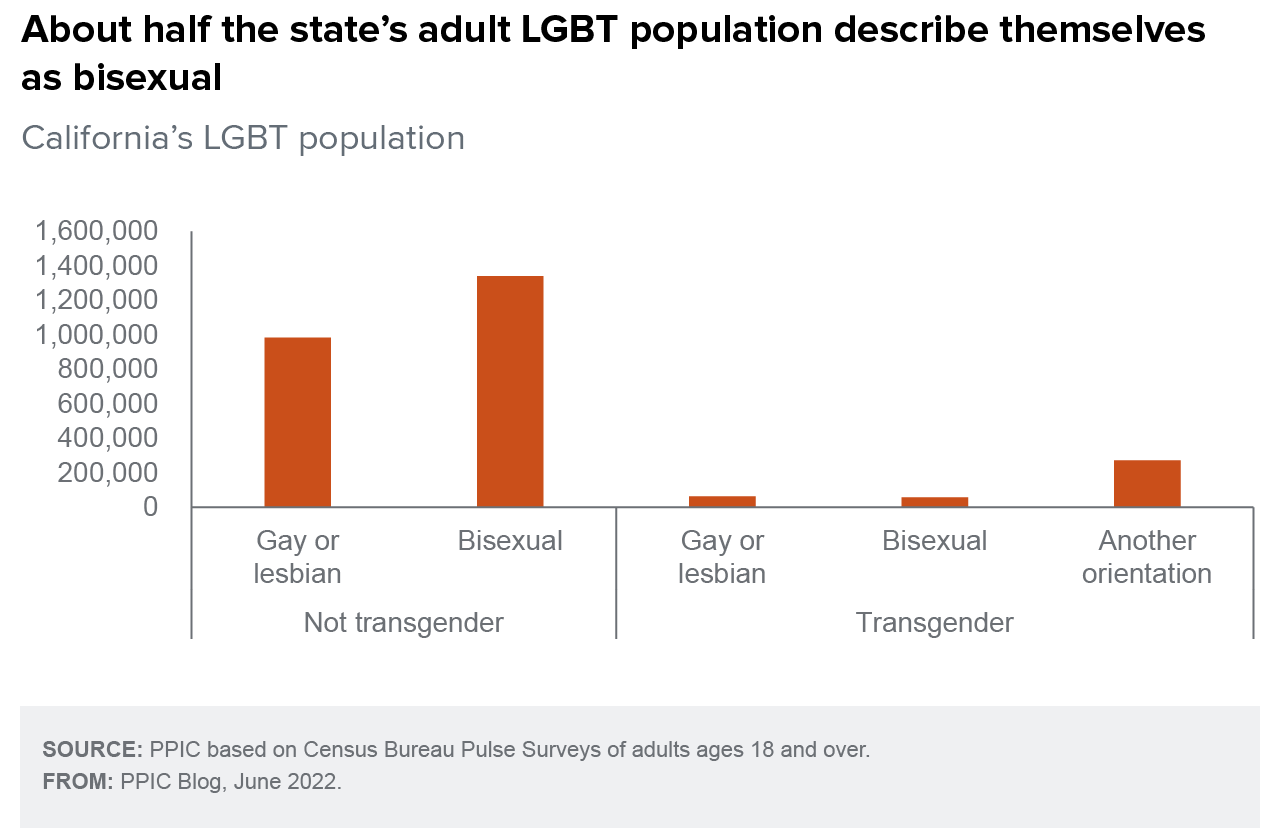 Younger adults are much more likely than older adults to identify as LGBT. One in five young adults in California identifies as LGBT, compared to only one in twenty older adults. Among LGBT young adults, the vast majority (68%) describe themselves as bisexual, 27% gay or lesbian, and 14% as transgender; 5% identify as transgender but not as lesbian, gay, or bisexual. In contrast, older LGBT adults in California are more likely to identify as gay or lesbian (49%) then either bisexual (31%) or transgender. 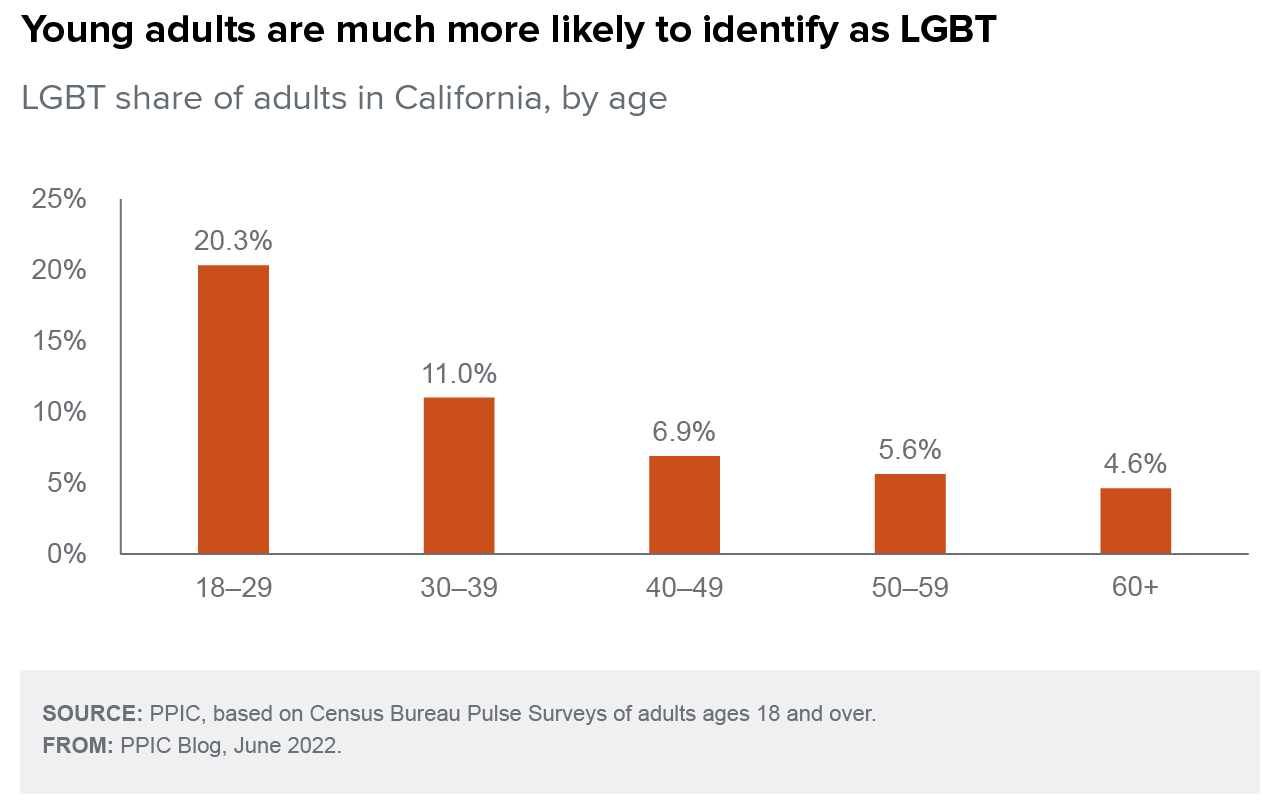 The LGBT population of California largely reflects the overall racial and ethnic diversity of the state’s adult population. In the general population no single racial/ethnic group constitutes a majority, with Latino and white adults making up the largest groups. Within the LGBT population, gay, lesbian, and bisexual adults follow this pattern. Transgender adults are more likely than others to identify either as Latino, multiracial, or a race other than Asian, Black, or white. 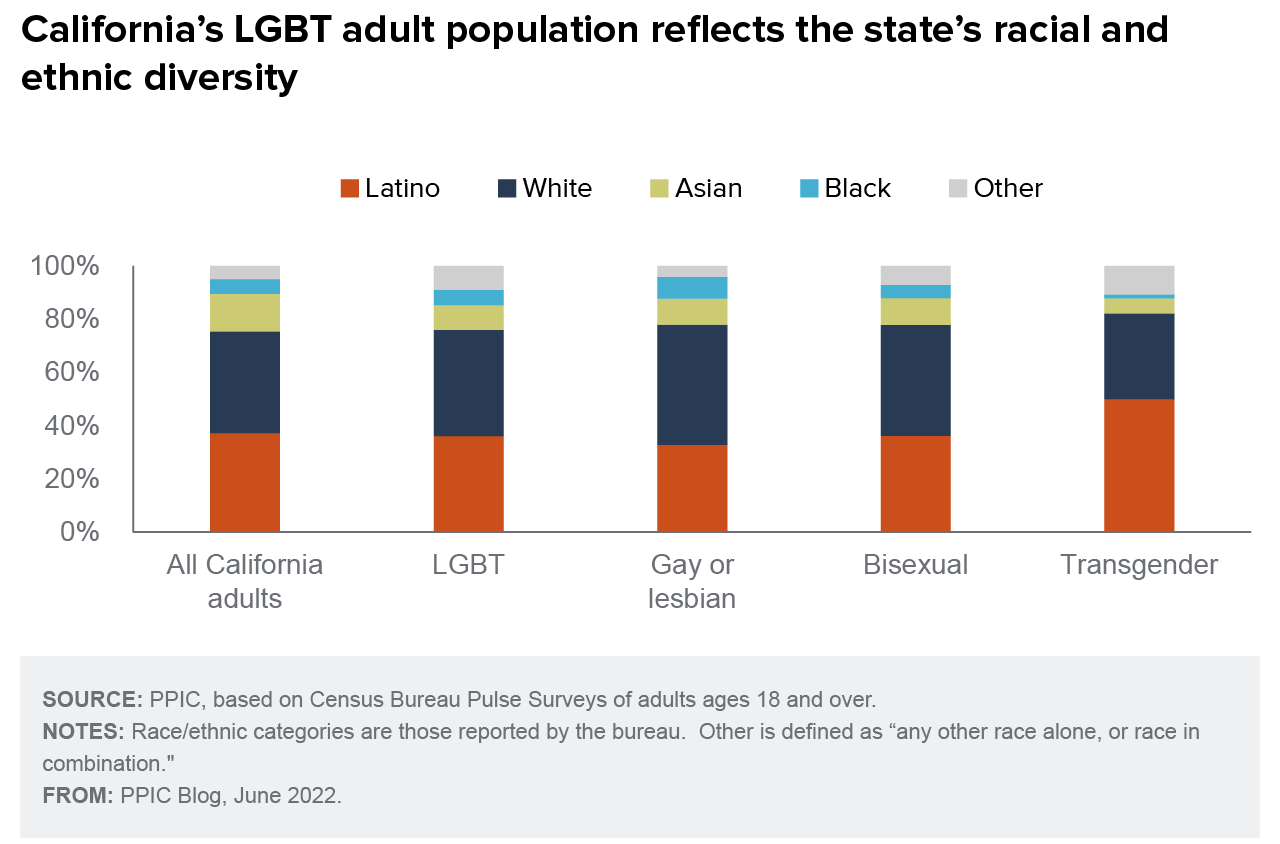 One of the primary missions of the Census Bureau is to develop a factual demographic, social, and economic understanding of the United States. Over the years, census questions have changed to reflect ongoing realities of self and group identity. The addition of questions related to LGBT identities marks an important step toward a more comprehensive profile of the American population. Whether the bureau adopts these questions for its much more detailed American Community Survey and the next decennial census in 2030 remains to be seen. In the meantime, PPIC will continue to monitor and report findings on California’s diverse population.

A technical note on the data:

The accuracy of survey data on sexual orientation and gender identify has long been questioned, with the primary concern being an undercount since some individuals might be reticent to divulge personal information about gender and sexual orientation. The estimates presented here are higher than estimates from some other sources. For example, the estimated adult LGBT population in California is 2.7 million (9.1% of all adults) according to the six most recent Pulse surveys, much larger than estimates derived from the Gallup Daily Tracking Survey as reported by UCLA (1.6 million, 5.3% of the population). The survey mode might explain some of the difference, with the bureau relying on an online format and Gallup using phone calls.

To improve the precision of the estimates, the numbers presented in this post are averaged over six of the most recent Household Pulse Surveys (surveys 40 through 45 from December 2021 through May 2022). The total sample included over 421,000 respondents nationwide (almost 29,000 respondents in California), with over 30,000 identifying as LGBT (over 2,700 in California). Response rates to the survey are relatively low, so non-response bias is a concern. The bureau’s weights are intended to compensate for some aspects of non-response bias.