With results from California’s 2022 primary certified, attention now turns to the fall election and candidate match-ups that will determine party control for the next two years. Particular interest falls on the congressional races, since the Democrats control the House of Representatives by a razor-thin margin. New congressional districts drawn in response to the latest census data further inject uncertainty into the outcome, especially in California.

There is no official list of competitive seats, but nonpartisan handicapper lists mostly agree with each other. The map below reflects the longest such list, from Larry Sabato’s Crystal Ball. It includes six districts considered occupied by Republicans and seven by Democrats. (The districts are all new, so none currently has a representative; we follow the Crystal Ball’s accounting to approximately assign parties to each.) 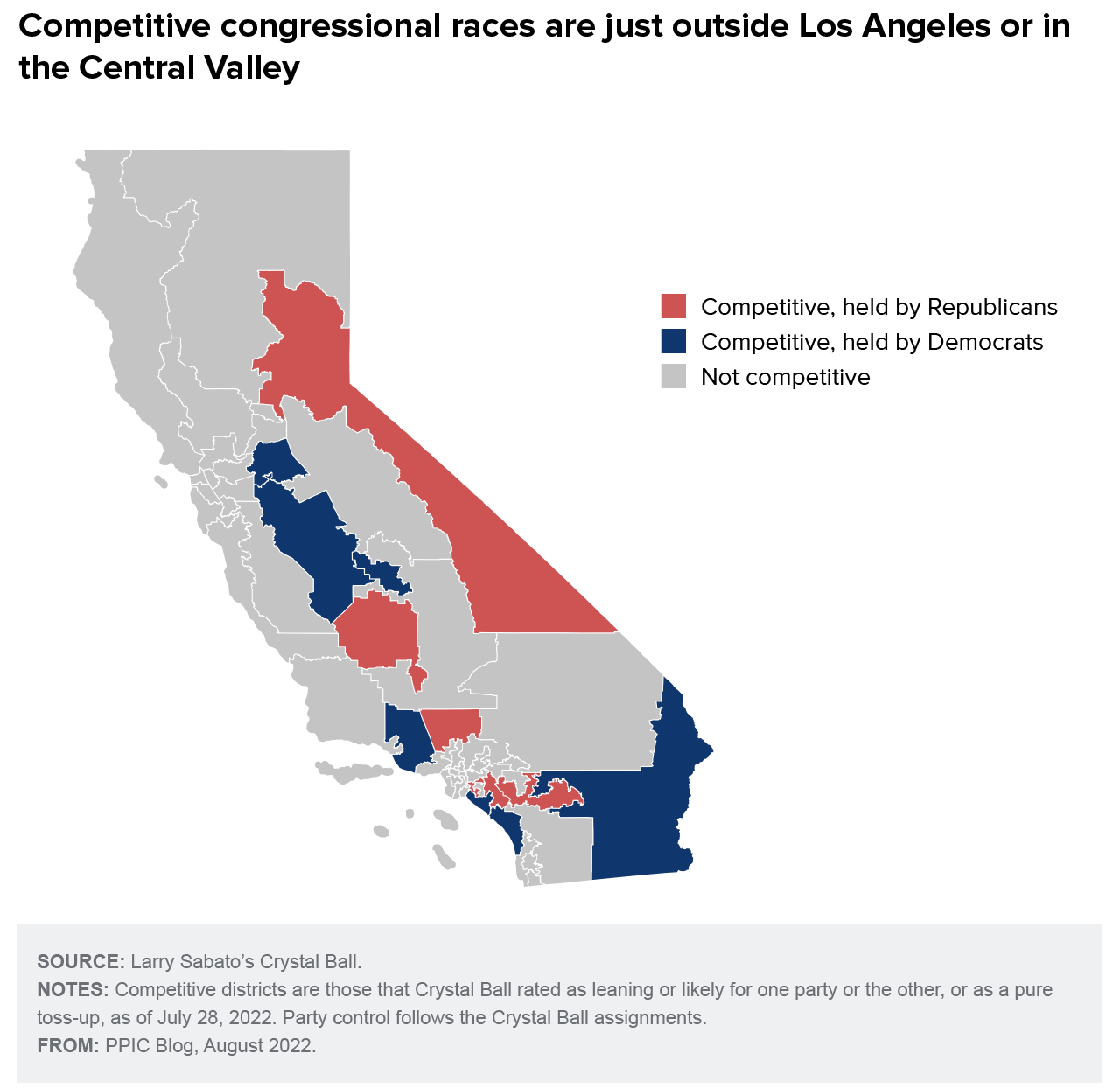 Constituents in these competitive districts have disproportionate influence over control of the House of Representatives, yet they don’t necessarily look like the state as a whole.  All are found just to the north and south of Los Angeles and in the Central Valley. Six of the 13 have more white voting-age citizens than the state as a whole, and two fall just a point or two below the state average. Four are majority Latino, and four are close to the Latino statewide average. Four districts fall at or above the state average for Asian Americans, while two are at or above the average for Black residents.

Familiarity with the districts varies for the incumbents running in them. Republican Michelle Steel faces the toughest challenge in District 45, where just 16% of the constituents come from her old district. At the other end, Mike Levin in nearby District 49 enjoys a constituency that is 91% familiar. Overall, the competitive seats are about equally familiar to incumbents in both major parties—with 50% of constituents familiar with the candidate in Republican-held districts and 60% familiar in Democrat-held districts.

Incumbency may not be the advantage it once was in fall elections anyway. In recent years, congressional outcomes have deviated little from the presidential vote in each district. In California in 2020, the average US House vote differed from the presidential vote in the same district by only 2.1 percentage points—the largest deviation was 6.9 points, and only 5 of 46 contested districts differed by more than 4 points.

It’s uncertain whether this tight relationship will continue, but the party vote did line up exceptionally well with the Biden vote in June’s primary. Under the new districts, a strict replay of 2020 would make any pick-ups by Republicans very unlikely.

But another dynamic is at work. In midterm elections, voters usually turn away from the president’s party uniformly and support the opposition. In 2022, that would mean subtracting support from every Democratic candidate in the state. If this large shift occurs—and there are signs that it might—it would make victory possible for Republicans in all the competitive seats: in the ones they currently hold and the ones they don’t.

The new districts still favor Democrats over the long term. Voters in the least competitive seat held by a Democrat voted 56% for Biden, while Republicans hold six seats in districts that voted under 51% for Trump. A uniform shift toward Republicans in these districts will help the party temporarily. Longer-term success will require either turning more voters into consistent Republicans or drawing more voters from across the aisle to support individual candidates. Both are possible, but will require a change in the status quo.

California’s Election Reforms at the Dawn of a New Decade

Primary Takeaways and a Preview of the Fall Election