California’s Election Reforms at the Dawn of a New Decade

The Secretary of State has certified the results of the June 2022 primary. This primary marks the tenth anniversary of two important California electoral reforms. The first is the Citizens Redistricting Commission (CRC), an independent panel of ordinary citizens that redraws California’s representational districts after every decennial census. The second is the Top Two, an unusual form of open primary that allows voters to choose a candidate of any party for each office, with the two candidates who receive the most votes—regardless of party—moving on to the fall election. Both reforms were sold, in part, as ways to weaken the power of parties and incumbents and make elections more competitive.

In a companion post, Mark Baldassare reviews statewide races and overall turnout in the June 2022 primary. Here the focus is on these two groundbreaking reforms. The 2022 election marks the first time in 10 years that both reforms are having an impact together. What can the primary election results tell us about this impact?

In a traditional primary, voters must first choose a party and then select a candidate with that party affiliation. The Top Two breaks these constraints and lets voters choose any candidate. In the first three elections under the Top Two, primary votes for candidates in each party deviated more from the district’s presidential vote than they had under the previous system—exactly what one might expect from voters who were exploring their new freedom to vote for candidates outside their own party.

But the ongoing polarization of American politics has made that change difficult to sustain. The deviation shrank in 2018 and 2020, and in 2022 it was even smaller than it was before the Top Two (see the figure below). Despite more choice, voters are now staying in their party lanes. 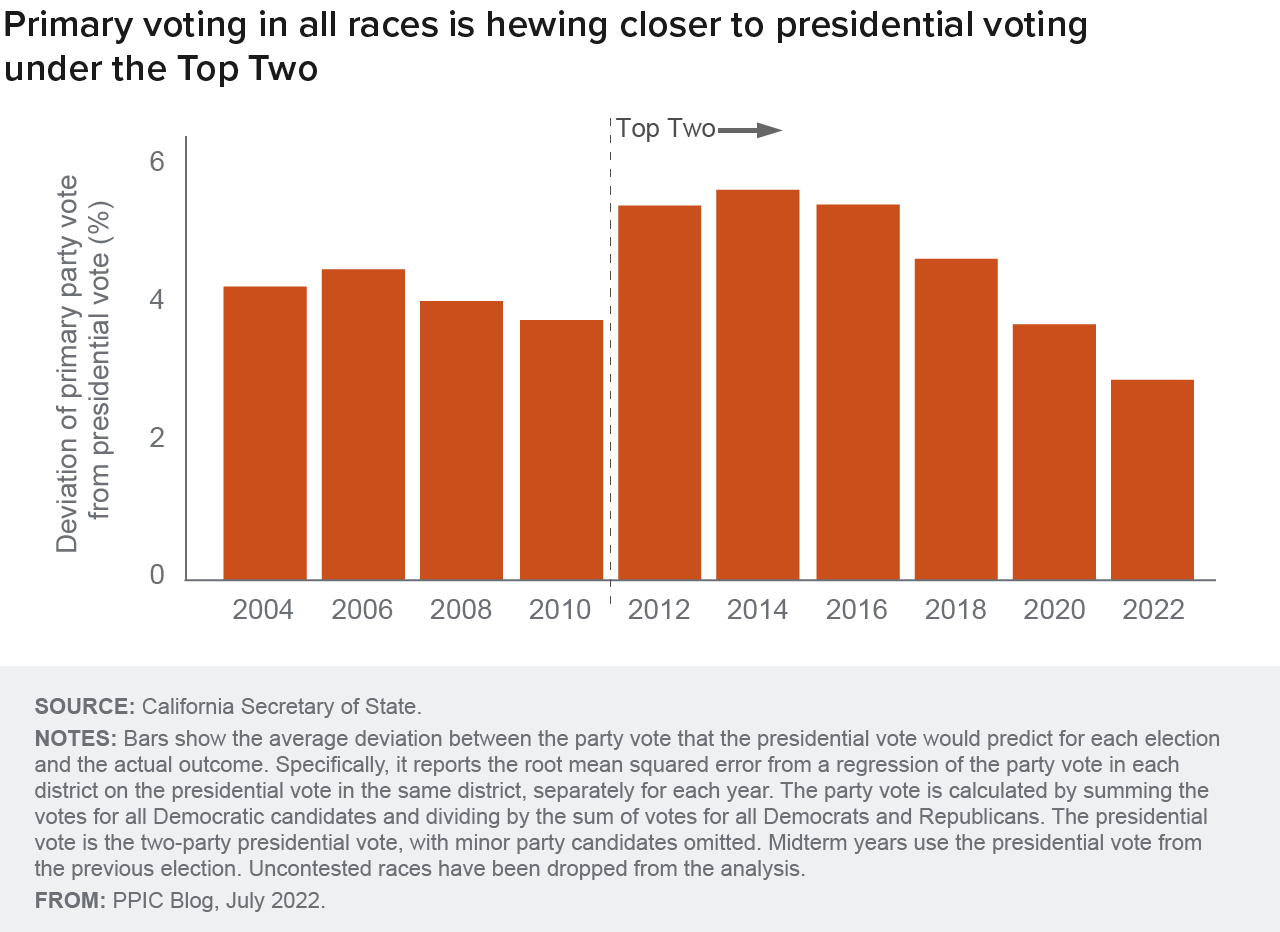 In addition, incumbents continue to do quite well. Every incumbent who ran this June finished in the top two. All but six received a plurality of the vote, and 8 of 10 won an outright majority. The average first-place incumbent beat the second-place candidate by 31 points, compared to an 11 point margin for non-incumbent winners.

The Top Two has produced some changes. Twenty-eight races this fall will feature two candidates of the same party—the highest number since 2012. These races are largely in districts where one party dominates, and they make up almost half the races without incumbents. Each race offers the potential for an unconventional candidate to win by piecing together a novel coalition. Sometimes, an otherwise safe incumbent might lose.

On paper, the Top Two is arguably the more radical reform. It aims to move toward a system where parties are less important than candidates. By contrast, the CRC is just a different decision-making process for an already-mandated redistricting that only happens once a decade.

Yet with the benefit of hindsight, the CRC looks like the more far-reaching change. It has been copied in more states, disrupted more entrenched incumbents, and promoted more genuine competition than the Top Two. Whatever their limitations, parties are a strong and growing part of American political life. The Top Two fights upstream against this electoral reality, while the CRC seeks instead to contain it and ensure that party-centered elections are conducted fairly. The Top Two will continue to shape California elections in important ways, but redistricting reform may well have the more enduring legacy.

Primary Takeaways and a Preview of the Fall Election