When the COVID-19 crisis began, state and county governments recognized that overcrowded jail conditions could pose unacceptable health risks for inmates and staff. As the crisis has unfolded, all counties have taken steps to decrease their jail populations. Some have made steeper reductions than others, and some of the measures that have facilitated these reductions—reducing pretrial detention and setting bail at zero for many crimes—may have longer-term significance as California considers whether to eliminate money bail.

In December 2019, the average statewide daily population was 71,200—89% of capacity. However, about one in six county jails were at or over capacity, and twelve were between 120% and 190%. Looking only at numbers of jails understates the scale of the problem, because overcrowding was most prevalent in the biggest ones in a few large counties—Fresno, Los Angeles, Orange, Riverside, and San Diego. About four in ten (39%) California inmates—more than 27,000 people—lived in jails that were filled to or beyond capacity just prior to the pandemic. 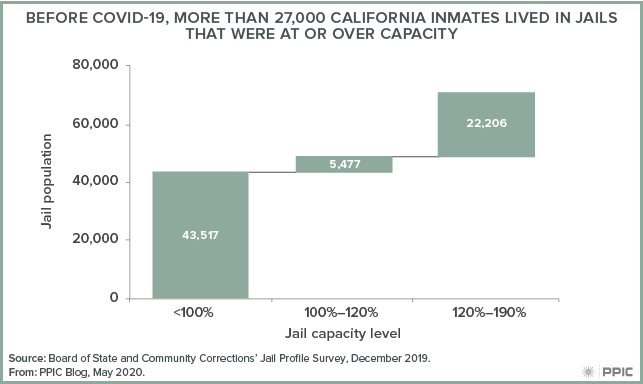 To reduce their jail populations, many counties began admitting fewer people to jail and releasing some inmates early. From February 29—when the Board of State and Community Corrections began reporting additional data—to April 11, the statewide jail population had fallen by 19%, to about 58,000 inmates. However, two county jail systems (Kings and Los Angeles Counties) remained over capacity and six county systems were at least 85% of capacity, accounting for over 20,000 inmates in total. Social distancing is challenging for inmates and staff at these capacity levels. 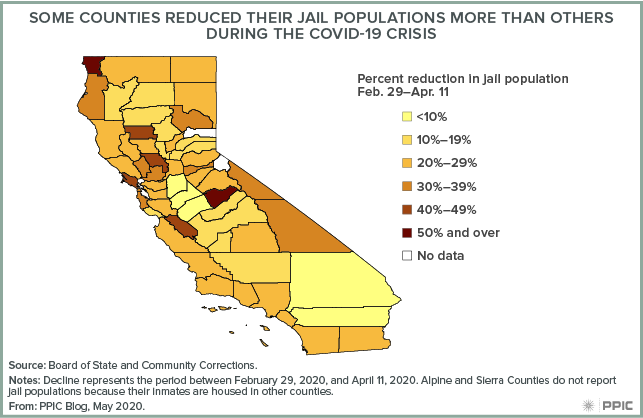 To encourage further reductions in the jail population, the Judicial Council issued a statewide rule setting bail at $0 for misdemeanors and low-level felonies that went into effect on April 13. The “zero-bail” rule targets pretrial detainees, who historically have been about two-thirds of California’s jail population; many of these detainees are incarcerated mainly because they cannot pay bail. From April 11 to April 25, county jail releases continued to outpace admissions, with 14,154 people admitted and 19,924 released statewide.

Temporary state and county efforts to reduce jail populations come as California considers a permanent shift from cash bail to a risk-based system of determining pretrial release. Given the public safety concerns raised as the zero-bail rule was implemented, and the fact that voters will decide whether to make a permanent shift away from cash bail in November, it is important to assess the impact of zero bail and other emergency measures.