The decennial census is fast approaching. Starting this Thursday, March 12, most households in the country will be sent an invitation to fill out a census form online. Over the next several months, the US Census Bureau will prod those who have not responded to make sure they are counted. The count will have important implications for political representation, federal funding, and a wide range of research.

Thanks to yearly estimates from both the Census Bureau and our state’s Department of Finance, we already know a lot about how the state population has changed, even before the census count begins. The latest numbers suggest a marked slowdown since the early 2010s. The California Department of Finance estimates annual growth of just 0.35% in 2018 and 2019, down from nearly 1% from 2010 through 2012. 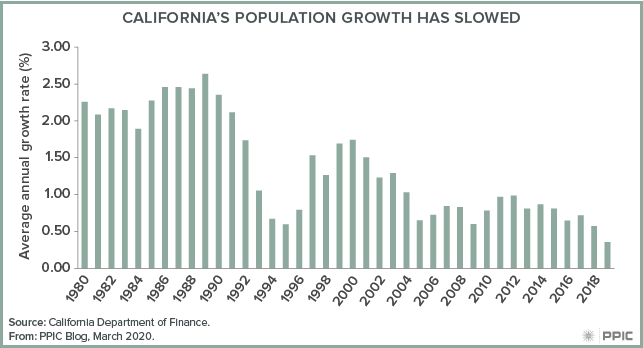 California is now a net loser in overall migration—that is, migration to and from both other states and other countries—for the first time since the Great Recession. The state has long experienced net losses in domestic migration—it has had net gains in only 3 of the past 30 years—but the losses have risen from 116,000 in 2017 to 198,000 in 2019.

International migration used to make up for domestic losses, but it has also slumped in recent years. The California Department of Finance estimates that net immigration from other countries has dropped from a gain of 217,000 in 2017 to a gain of 181,000 in 2019. The US Census Bureau reports an even bigger drop in international migration, enough for a total population estimate that is 447,000 people smaller than the one from the Department of Finance.

California’s population is also getting older, and the state’s young adults are having fewer children. Natural increase—the difference between births and deaths—has been falling since the early 1990s. It remained above 280,000 each year from 1991 to 2010, but since 2015 it has fallen from 247,000 to just 181,000. This decline mostly comes from a downward trend in births. In 2019, California had 11.3 births for every 1,000 residents, its lowest rate in well over a century. 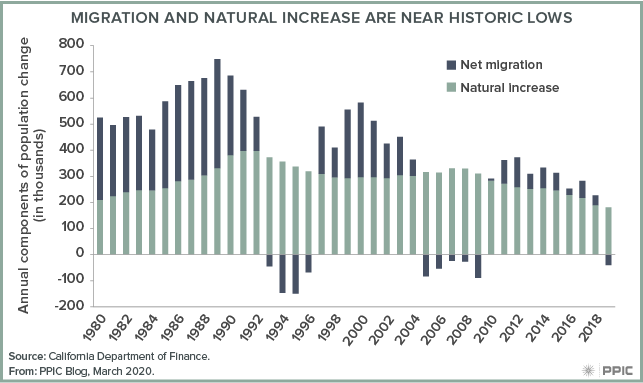 Natural increase is essential to understanding California’s future. Net migration may rebound, as it has in the past. But the state’s birth and death trends indicate that California’s population will grow slowly for years to come.