Californians’ perceptions of police treatment and race relations have shifted—dramatically, in some cases—in the wake of nationwide protests over police brutality and systemic racism. But these changes are far from uniform and reflect deep cleavages in public opinion today.

The September PPIC Statewide Survey asked this question about the police in Californians’ local communities: Do residents think all racial and ethnic groups are treated fairly? We found that 53 percent of adults say “always” (24%) or “most of the time” (29%). In February, the last time we asked this question, 61 percent responded that all groups received fair treatment either always (30%) or most of the time (31%).

This 8-point overall decline masks large differences across racial/ethnic groups. African Americans (31% to 19%) and Asian Americans (66% to 44%) had the steepest declines in confidence in their local police, while Latinos (61% to 56%) and whites (63% to 58%) showed much less change. As a result, fewer than two in ten African Americans and just over four in ten Asian Americans, compared to majorities of Latinos and whites, say their local police mostly or always treat all racial/ethnic groups fairly today. 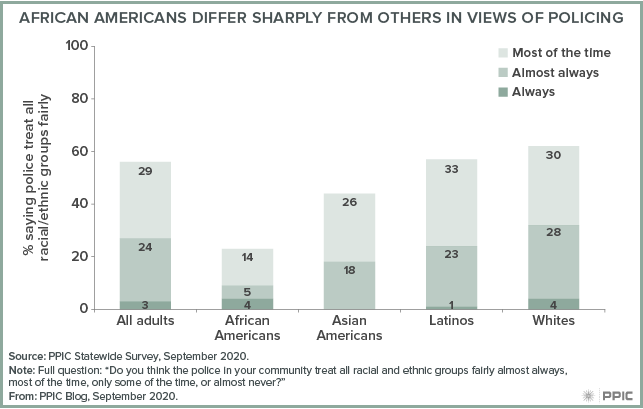 The partisan divide on views of police fairness has also grown. Positive views about local policing declined significantly among Democratic voters (53% to 36%) while changing very little among Republican voters (76% to 77%) and independent voters (59% to 56%). Today, about one in three Democratic voters, compared to majorities of independent voters and overwhelming majorities of Republican voters, say local police mostly or always treat all racial/ethnic groups fairly.

Changing opinions about police treatment are also more evident among younger than older adults, lower-income than higher-income residents, renters than homeowners, and women than men.  Across regions, positive views of police treatment had a steep decline in the San Francisco Bay Area (60% to 44%), with smaller decreases in Los Angeles (57% to 49%), Central Valley (68% to 62%), and Orange/San Diego (65% to 60%). There was no change in the Inland Empire (51% in February and September).

Most notably, the recent shift provides a rare example of consensus across party lines. The perception that race relations have gotten worse has doubled among Republican voters (28% to 57%) and grown significantly among independent voters (47% to 58%), but has not changed much among Democratic voters (57% to 63%). 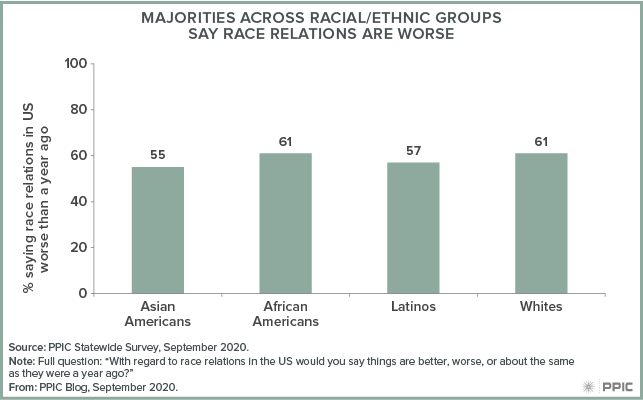 Moreover, the perception of worsening race relations has increased sharply among Asian Americans (38% to 55%), Latinos (45% to 57%), and whites (45% to 61%), but has changed less among African Americans (66% to 61%). Today, majorities across partisan, racial/ethnic, demographic groups, and state regions, are now saying that race relations in the US have gotten worse.

Race relations and fairness in policing are front and center as California voters make their ballot choices this fall. The PPIC Statewide Survey will be closely following these issues in the lead-up up to the November election and exploring policy solutions in the new year, as federal, state, and local elected leaders gather to chart a course for a better future for California and the nation.