Electability Matters in the Democratic Primary

Dean Bonner February 27, 2020
NEVER MISS AN UPDATE!
Sign up for our blog alerts to receive insights from PPIC by email.

Californians will head to the polls next Tuesday for the Democratic primary—and over 2 million have already returned their mail-in ballots. As Democratic and independent (also known as no party preference) voters prepare to choose their presidential nominee, the question arises: do they care more about electability or a candidate’s position on the issues?

Electability seems to edge out issue position for likely voters. According to our February 2020 survey, choosing the candidate most likely to defeat Donald Trump is more important to nearly six in ten Democratic primary likely voters (57%), while one in three (33%) say nominating a candidate whose positions on the issues come closest to theirs is more important. Findings were similar in our November 2019 survey (55% electability, 36% issue positions). 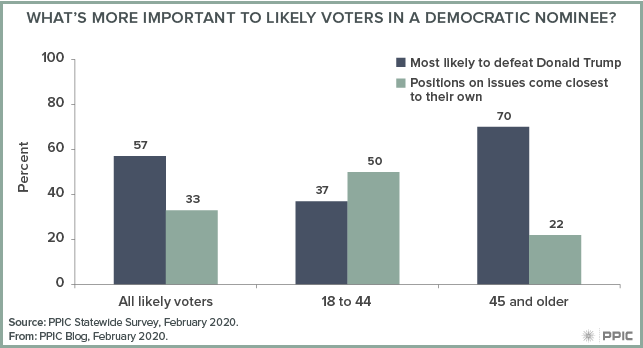 There is a connection between a likely voter’s priorities and support for specific candidates. Among those who rank candidate positions on issues as more important, 43% support Bernie Sanders; fewer support Pete Buttigieg (13%), Elizabeth Warren (11%), Joe Biden (9%), or Michael Bloomberg (7%). For those who rank electability as more important, Sanders is also the top choice with 24% support, but he is followed closely by Biden (16%), Bloomberg (16%), Warren (15%), and Buttigieg (12%).

As Californians prepare to cast their votes at the polls—and continue to send in mail ballots—electability will be on the minds of many, and it could play a role in deciding who the Democratic Party nominates to run in the fall.