Alyssa Dykman January 15, 2020
NEVER MISS AN UPDATE!
Sign up for our blog alerts to receive insights from PPIC by email.

Independents may play a central role in the March primary, as they now comprise the second-largest voting bloc in California. The share of Californians registered as independents, also known as “decline to state” or “no party preference” (NPP), was 26.7% of registered voters as of October—up from 24% at the same point before the last presidential primary. With independents a growing faction, it is critical to understand these voters and their motivations.

In PPIC’s November Statewide Survey, 28% of registered voters were independents. About six in ten say they have always been an independent voter, while four in ten say they previously registered with a major party—with 56% naming the Democratic Party and 40% the Republican Party. Today, about half of independent voters (48%) consider their views closer to the Democratic Party, while fewer say the Republican Party (24%) or neither party (22%).

When asked the main reason they are registered as an independent and not as a member of a political party, a plurality (39%) say they are not satisfied with the parties and they do not reflect their views. Another 15% say they vote for candidates, not parties, and 8% vote for both Democrats and Republicans. 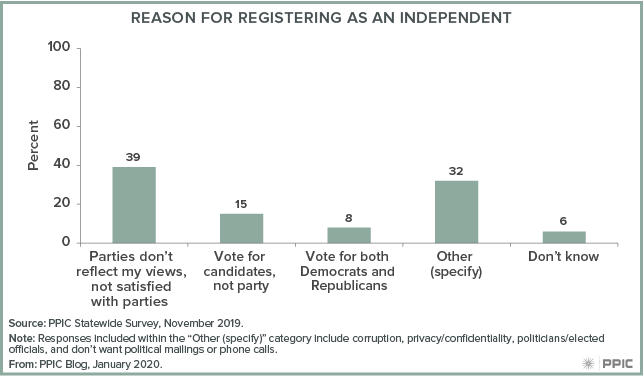 Independents seeking to vote in the Republican presidential primary must re-register to vote with that party. Without registering as a Republican, independents will be unable to cast a vote for President Trump or potential challengers in the Republican presidential primary. (Members of the Green or Peace and Freedom parties must also re-register with and request a ballot from the major party of their choice.)

Independents who want to vote for US president in the primary must request a ballot with presidential candidates on it; otherwise, they receive a nonpartisan ballot. Although the deadline to request a ballot has passed, independents can still exchange their ballot at a local elections office or re-register with another party.

PPIC will continue to track voter and party profiles in 2020, with a focus on the state’s evolving independent voting bloc.