Hans Johnson June 21, 2018
NEVER MISS AN UPDATE!
Sign up for our blog alerts to receive insights from PPIC by email.

In California and the United States as a whole, women have made strong educational progress over many decades. In 2006, for the first time ever in California, women became more likely to hold a bachelor’s degree than men. Women’s educational advantage over men has continued to grow in the past decade. In 2017, women received 57% of the bachelor’s degrees, 58% of the master’s degrees, and 54% of the doctorates awarded by California colleges. Much of this advantage stems from better preparation: women are more likely to graduate from high school than men and are also more likely to complete the college preparatory courses required for admission to the state’s public universities. Even so, women remain underrepresented in key science, technology, engineering, and mathematics (STEM) majors—in California and across the nation.

Because engineering and computer science are associated with strong labor market outcomes, low shares of women in those fields is cause for concern. The proportion of women majoring in these fields has not risen much in recent years: from 2010 to 2016, the share of bachelor’s degrees awarded to women in California increased from 19% to 21% in engineering and from 16% to 18% in computer science. 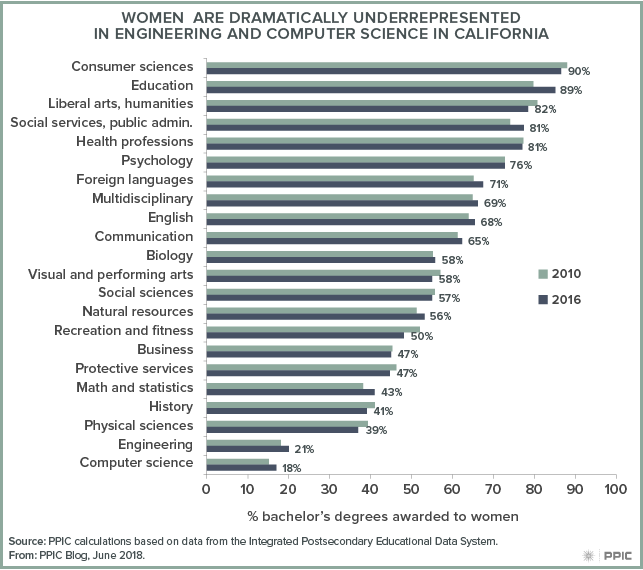 Efforts to address STEM gender imbalances are under way. For example, an NSF study by UCLA researchers is using longitudinal data across a set of colleges to identify actions that can increase the share of women in computer science. Given California’s high tech economy, the state’s colleges and universities should play a leading role in meeting this challenge.