The state’s response to the COVID-19 pandemic has sent Californians back into their homes. Yet for Californians living with an abusive partner, “home” is not safe—and sheltering in place can make reporting domestic violence and getting help harder. Although incidents reported by police do not seem to have increased since shelter-in-place began, data from hotlines and service providers suggest a troubling trend of rising violence in homes.

Since the start of the pandemic, victims’ advocates and law enforcement have expressed concern that orders to stay at home would increase intimate partner abuse. They worried that the stress of close confinement without access to social services or housing alternatives would intensify violent and controlling behavior, especially after unemployment spiked and officials extended stay-at-home orders for months.

Police reports do not suggest a sustained rise in domestic violence during shelter-in-place. Though California lacks comprehensive data on this issue, three major cities with available data did report jumps in police reports of domestic violence immediately after shelter-in-place began between March 17 and March 19. In Los Angeles, incidents reported by police increased from 263 to 282 in the week after shelter-in-place began. There were similar upticks in Oakland (from 27 to 57) and San Francisco (from 14 to 19). However, these increases did not last over the next three months. 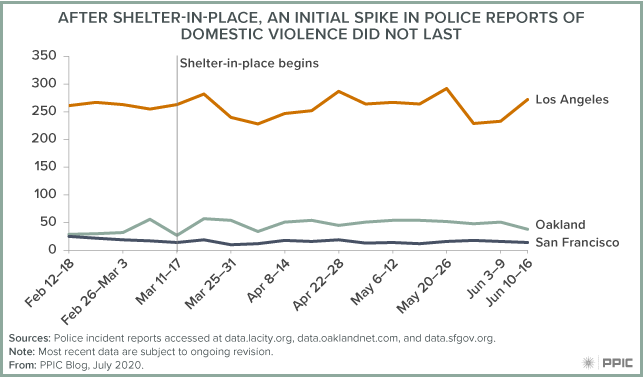 But data from police reports are limited and do not capture all victimizations. Those experiencing domestic violence may not feel safe calling police. They may fear retaliation from their abusers, losing custody of their children, or police violence against their partners and themselves. Instead, victims often call shelters and resource centers for help.

Calls to the National Domestic Violence Hotline from Californians rose about 17% from March to May. Moreover, the number of hotline calls had been lower relative to last year, but in April and May there were 7% to 15% more calls than in 2019. 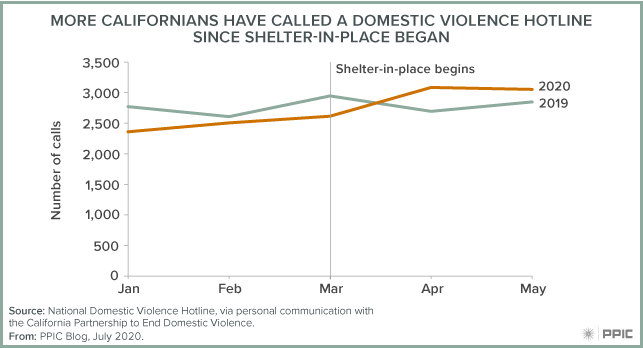 Given the unique circumstances of the pandemic, data from hotlines and service providers might actually be understating the extent of the problem. Constant proximity to volatile partners at home and fear of virus transmission in crowded shelters might deter victims from calling for help.

Changes to shelter-in-place orders might affect people’s ability to seek help for ongoing abuse—but we lack the data to know for sure. A statewide effort to coordinate data collection from police and service providers could yield more comprehensive information about the prevalence and severity of domestic violence—which could improve state and local responses to this often hidden problem.

Fewer Domestic Violence Calls, but More Incidents Could Be Deadly