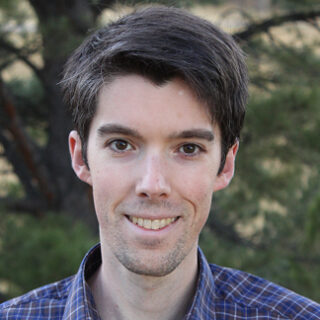 Northern California—where most of the state’s water supply originates—has been exceptionally dry this year, part of an unfolding decades-long “megadrought” affecting much of the West. While the focus of attention is naturally on managing drought, two new studies suggest that we have vastly underestimated the state’s flood risk.

California’s climate is already the most variable in North America, and global climate change is making it even more volatile, with increasingly dramatic swings between wet and dry conditions—referred to as “precipitation whiplash.” In addition, rising sea level is increasing the likelihood of coastal flooding, which is often associated with intense storms. Water managers have the unenviable task of simultaneously mitigating increasing drought and flood risk.

Most major floods in California are associated with atmospheric rivers. These narrow, concentrated bands of atmospheric moisture resemble rivers as they flow from west to east across the Pacific. When these storms make landfall in California, they interact with the state’s mountainous terrain to produce prodigious amounts of rain—rivalling rainfall rates of hurricanes—and voluminous runoff.

Atmospheric rivers are California’s most welcome drought-busters and most unwelcome flood generators. The numerous atmospheric rivers that hit California in 2017 broke the 2012–16 drought, filling the state’s reservoirs. But they also broke the spillway at Oroville Dam, requiring the evacuation of more than 180,000 people and causing more than $1 billion in damages.

As the climate warms, atmospheric rivers are growing more intense. A new study zeroes in on the details of how this is increasing flood risk in California.

Warming atmospheric rivers can carry more moisture. This dramatically increases a storm’s precipitation intensity (the amount of precipitation per hour) as well as the total volume of precipitation. Warmer storms also produce less snow and more rain, adding to potential runoff. The combination of increased precipitation intensity and volume causes flooding as runoff rapidly overwhelms levees on rivers and storm water management facilities in cities.  These intense storms also cause damaging landslides and mudflows, especially in areas that have recently burned.

Warming atmospheric rivers are a challenge for California’s flood management. Today, much of the state relies on Federal Emergency Management Agency (FEMA) flood maps to guide land-use planning and the siting of flood infrastructure. But these maps are principally based on historical conditions rather than current, rapidly changing conditions. In addition, many of these maps are incomplete, and don’t take into account all sources of flood risk. 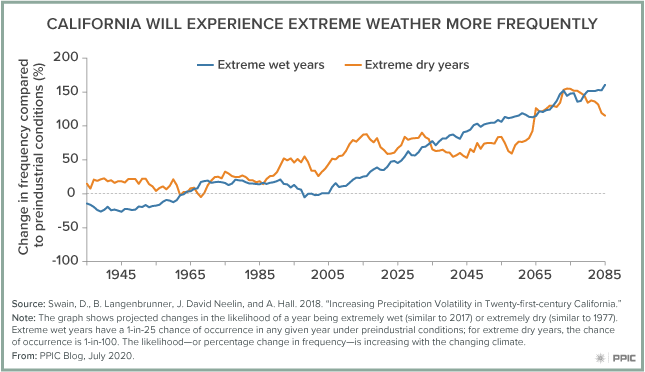 A second study—by the First Street Foundation—presents new estimates of current and future flood vulnerability across the US. This study uses more sophisticated tools than FEMA to model floods and does a better job accounting for climate change and sea level rise.

The takeaway from this work is that the state—and its federal partners—may have vastly underestimated current flood vulnerability. FEMA maps show that roughly 500,000 California properties are at substantial likelihood of flooding, with a 1% chance of being flooded in any given year. The study found that more than twice that amount—1.1 million properties—are already at this level of risk, and that an additional 150,000 properties will join them in the next 30 years, mainly because of rising seas. The number will likely be higher once the flood risks from warming atmospheric rivers—outlined in the first study—are factored in.

These studies indicate that California’s flood managers face a major challenge due to a weak understanding of current and future flood risk. Documenting risk—and communicating it well to the public—is an essential first step in flood management, as it guides the development of adaptation strategies, land use planning, and investment in infrastructure. Failure to do this can have major social and economic consequences.

During the past decade the United States has experienced historic increases in flood damages, with 32 major floods totaling more than $146 billion in damages and 555 deaths. Other than the Oroville Dam disaster, California has been fortunate to avoid major losses during this time, but we cannot be complacent. Although much effort has already gone into tackling the problem of increasing flood risk in California—including exemplary planning efforts like the Central Valley Flood Protection Plan—we have much more work to do. The place to start is improving our understanding of risk, and factoring it into planning and preparing for a changing flood future.