How Are School Districts Spending Their LCFF Dollars?

Since the enactment of the Local Control Funding Formula (LCFF) in 2013–14, funding for K–12 education has risen to record highs. Much of the increase is due to the improved state economy, which has seen nearly a decade of continuous growth and led to dramatic expansions in the state budget. Even so, the LCFF has significantly altered the funding landscape, with the intention of providing more resources to the districts, schools, and students who need them most. Six years in, what can we say about how this system is faring?

Under the LCFF, districts with more high-need students (those who are low income, English Learners, homeless, or foster youth) have seen larger funding increases. Between 2013–14 and 2017–18, high-need districts (those with student populations that are at least 55% high need) increased student spending more than $500 more per-pupil than did lower-need districts (where fewer than 30% of students are high need). Districts with especially large shares of high-need students (80% or 90%) saw an even greater funding increase under the new funding formula.

Are higher-need districts spending differently than lower-need districts? We can address this question by comparing the changes in spending between 2012–13—the year prior to LCFF’s enactment—and 2017–18, the most recent year for which K–12 financial data is available.

Second, higher-need districts have been spending more on support staff and other non-teaching staff. They have also spent more on services, materials, and other student spending (excluding capital outlay, debt service, pre-K, and adult education): these expenditures increased by $822 per student in the highest need districts, as opposed to $336 in the lowest need districts. Higher-need districts are most likely attempting to address the additional challenges that higher-need students face outside the classroom. The hope is that these additional services and support staff will translate into improvements in academic performance that will narrow achievement gaps. Research on similar reforms in other states suggests that this approach will eventually pay off. 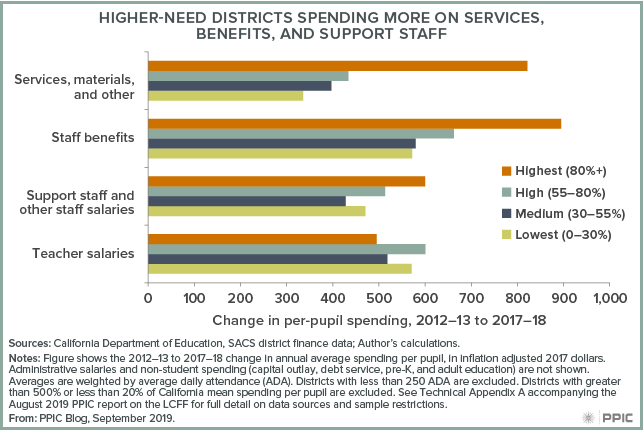 Currently, however, concerns are growing about whether additional funding is reaching the highest-need students within districts. Because districts are not required to report their school-level spending publicly, it is difficult to assess how this funding is allocated within a district. However, public staff records and salary schedules do allow us to examine differences in teacher spending across schools in the same district. Such comparisons show that districts tend to spend more on their highest-need schools but that the difference is modest.

Fortunately, federal requirements will soon make more comprehensive school-level spending data available. While we don’t yet know how accurate and comparable it will be, this data will bring new and much-needed transparency to our K–12 finance system.