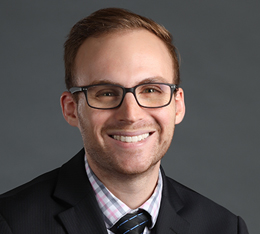 The good news is that K‒12 schools have largely made the digital transition. In 2018, 90% of California schools met the Federal Communications Commission’s (FCC) minimum threshold for digital learning and had the internet resources necessary to administer the state’s online assessment.

But at home not all students have reliable internet access or a traditional computer, such as a desktop or laptop. Overall, 16% of school-aged children in California do not have any internet access at home, and 27% do not have a high-speed connection, meaning they rely on slower connections like dialup or satellite. In addition, nearly 10% access the internet with a cellular data plan, which usually means slower speeds and suggests they are relying solely on a smartphone or tablet. 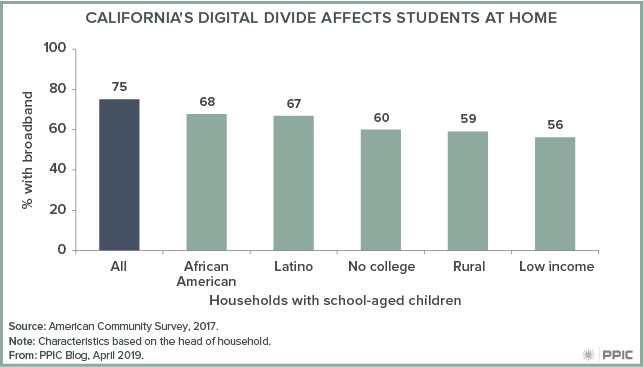 This digital divide in broadband access at home—known as the “homework gap”—may affect student learning. An analysis by the Pew Research Center found 17% of teens say they are often or sometimes unable to complete their homework due to a lack of reliable internet or computer access, with about a quarter of low-income and African American teens saying this. Another study shows that eighth graders who do not have internet access at home score lower on national exams in reading and math than their peers. Similarly, students without computers at home score lower in their ability to use computers and other digital devices. These factors may worsen the disadvantages faced by lower-income students, who have lower high school graduation rates and lower standardized test scores than their wealthier peers.

While there are discounts available to lower-income families struggling to afford internet access, three in four California households without broadband are unaware of these discounts, according to a Berkeley Institute of Government Studies poll—suggesting that federal and state policymakers can do a better job promoting these programs.

Some districts have developed innovative approaches to address the digital divide. For example, a few years ago Coachella Valley Unified outfitted school buses with Wi-Fi and parked them throughout the district’s rural neighborhoods to serve as mobile hotspots. As more schools embrace digital learning, developing new ways to broaden internet access is key to closing equity gaps and ensuring that learning continues outside the classroom.