NOTES: In the American Community Survey, broadband specifically refers to those who said “yes” to “having high-speed internet services installed at home, such as cable, DSL or fiber-optic service.” The FCC instituted a speed benchmark for broadband of 25 mbps download and 3 mbps upload (25 mbps/3mbps) in its 2015 report. The California Public Utilities Commission has a different benchmark of 6 mbps/1.5 mbps, which was later amended to 6 mpbs/1 mbps (AB 1665). When we model broadband access in a multivariate model that includes household characteristics and time trends, variables such as household income, race (with the exception of Asian/Pacific Islander), educational attainment, and geographic location, are significant predictors of broadband access. Race/ethnicity is based on the head of the household. The number of households or school-aged children without broadband subscription at home may represent a low estimate, as the American Community Survey excluded respondents (382,203 households) that accessed internet without paying the internet service provider. 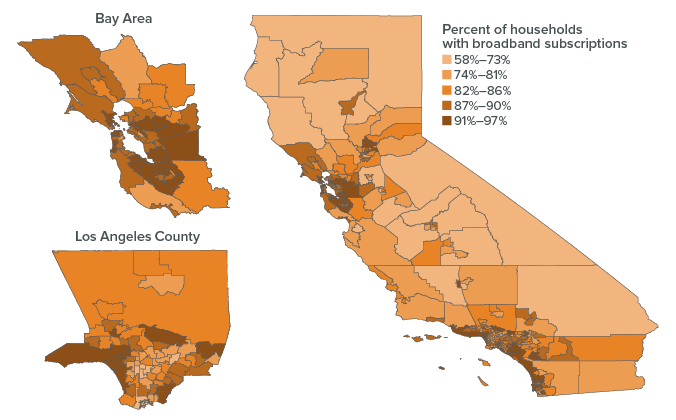 NOTES: High-need schools are those in which more than 55% of students are low-income, English Learners, and/or foster youth. When we model connectivity in a multivariate model, geographic location and student enrollment are significant predicators. The FCC’s minimum threshold for digital learning is 100 kbps per student; its long-term target is 1,000 kbps per student. Since 2015, the state has used a computer-based assessment (SBAC) for student testing, which requires a minimum bandwidth of 20 kbps per student, which nearly all schools have. Large urban districts may not need as much bandwidth for digital learning.