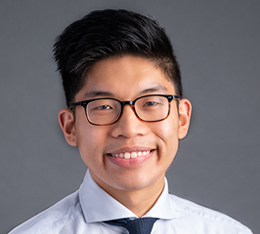 As COVID-19 remains an immediate threat to the health of Californians, the public health response to the virus has also brought on a major economic downturn. These concurrent crises may exacerbate the state’s existing housing crisis. Prior to the pandemic, Californians identified housing costs as among the state’s highest hurdles. Concern is underscored by California having the third highest rate of cost-burdened renter households in the nation.

Even before the pandemic, about half of all adults in California and two-thirds of renters and those in low-income households said housing costs were a financial strain. And racial and income disparities make some groups more at risk of eviction than others, much as extant health disparities have contributed to disproportionate COVID-19 deaths.

The rise in unemployment due to COVID-19 may deepen financial strain for already vulnerable residents; according to the May PPIC Statewide Survey, 35% of adults in California say they or someone in their household has lost their job due to the pandemic. Households with annual incomes under $40,000 (47%) were twice as likely to report job loss as those earning $80,000 or more (22%). Latinos (49%) reported job loss at nearly twice the rate of whites (25%), and more renters (41%) lost their jobs than homeowners (30%). 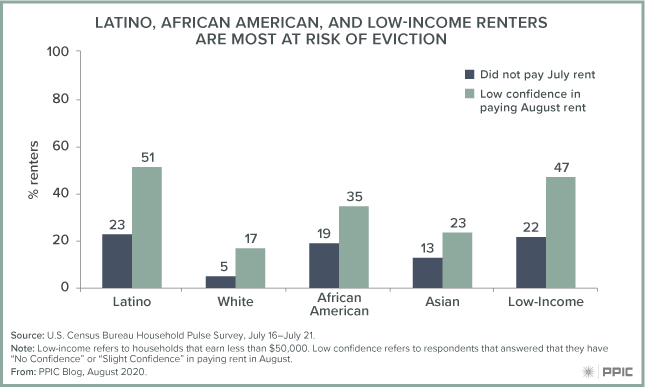 Vulnerability to pandemic-induced job loss may be the reason Latino (23%), African American (19%), and low-income (22%) households failed to pay rent in July at significantly higher rates compared to white (5%) households, and are at disproportionate risk of being evicted. Not only do evictions substantially affect the economic and overall well-being of those evicted, but greater housing instability also poses threats to personal and public health.

Government officials have taken steps to mitigate the impact of COVID-19 on cost-burdened renters. Governor Newsom recently issued an executive order that authorizes local governments to extend their moratorium on evictions through September 30. In contrast, the Judicial Council of California recently signaled it will consider rescinding the moratorium on eviction court proceedings as early as August 14. Local governments, such as Los Angeles County and Bay Area counties, took quick action to ease the burden on renters by setting up rent relief programs or placing moratoriums on eviction.

Although moratoriums have stemmed evictions thus far, they are a temporary measure as state officials scramble to devise long-term solutions. Numerous proposals in the legislature seek to minimize evictions from different angles. Strategies range from direct rental payments by the state on behalf of renters to an outright ban on evictions during the current pandemic.

New Housing Fails to Make Up for Decades of Undersupply