After large decreases in March, the latest numbers on crime in the wake of COVID-19 mostly point towards a leveling off, with continuing lower rates for four California cities—Los Angeles, Oakland, San Diego, and San Francisco. There are a few exceptions, such as commercial burglaries, which rose by about 37%.

Swings in crime numbers stem from many factors under any conditions, and certainly during a pandemic.  With improved weather and possible shelter-in-place fatigue, more people—potential victims and perpetrators—are out. The dire economic situation may be a factor, while state and local directives, such as zero bail, an issue of heightened concern within law enforcement, may be another.

Data on crime in these four large cities cover rates through April 2020. They represent preliminary numbers that are subject to revision before they are submitted to the California Department of Justice as part of the state’s official crime statistics. Furthermore, the numbers do not represent all of California.

A closer look shows that violent and property crimes broadly leveled off in April, after falling from February through March. In particular, violent crimes fell from 1,881 in February to 1,603 in March, and then came down slightly to 1,580 in April—a decrease of 16% since February. For property crimes, the number dropped from 4,294 in February to 3,399 in March, then fell somewhat further in April to 3,302, for a total February-to-April drop of 23.1%. 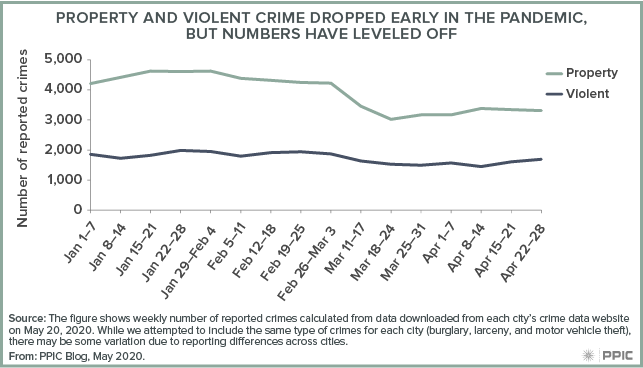 Within these broader categories, some crime was on the uptick in April. While burglaries fell by 1.3% from February to March, the weekly number rose by 9.3% in April compared to February. This increase is primarily driven by commercial burglaries, up by 21.2% in March relative to February and up by 37.5% in April, again relative to February. Car theft is also up: after declining by 4.2% between February and March, it rose in April and is now 8.5% higher than in February. 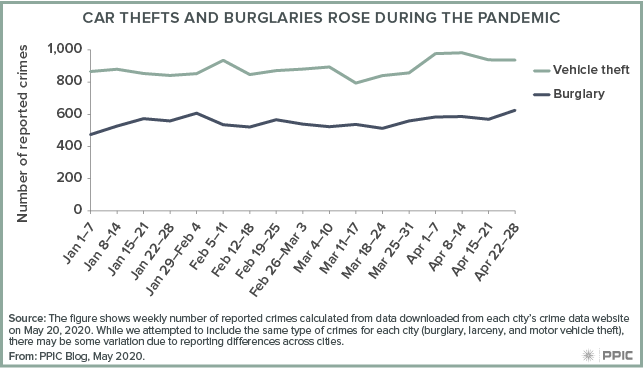 The changes in crime numbers vary across these cities. For example, while commercial burglary is up in all four cities, the rise in vehicle theft is driven by Los Angeles, where the number of stolen vehicles increased from 352 to 363 and then 468 in February, March, and April; or up 32.9% compared to February. In Oakland, reported assaults rose in April; after dipping to 96 per week in March—from 116 in February—the average weekly number of assaults climbed to 129 in April. And while still below pre-pandemic numbers, assaults in Los Angeles in late April were higher than in March, up from 766 to 805 on average per week.

As crime in these four cities seems to be hovering at low rates, at or below the pre-pandemic numbers, there is no evidence yet that efforts like zero bail, which went into effect April 13, led to broad increases in crime. However, as some crimes are on the uptick, they deserve attention to determine whether they are part of common swings in crime numbers or early signs of reversing trends. If reversals are indicated, now is the time to identify contributing factors and investigate effective solutions.