Proposition 187 and a Changing California

Twenty-five years ago, in the midst of the worst economic crisis since the Great Depression, 59% of Californians voted to pass Proposition 187. The landmark ballot measure sought to set up a state-run immigration system and deny most public benefits—including K–12 education—to undocumented immigrants. The measure was later found to be unconstitutional, but its impact was pivotal in transforming California into what it is today.

Most Californians now support policies to protect undocumented immigrants. A recent PPIC survey found 61% of Californians and 54% of likely voters are in favor of state and local governments making their own policies and taking actions, separate from the federal government, to protect the legal rights of undocumented immigrants. In addition, our April survey found 57% of Californians (54% likely voters) support public school districts designating themselves “sanctuary safe zones” to indicate they will protect undocumented students and their families from federal immigration enforcement efforts. 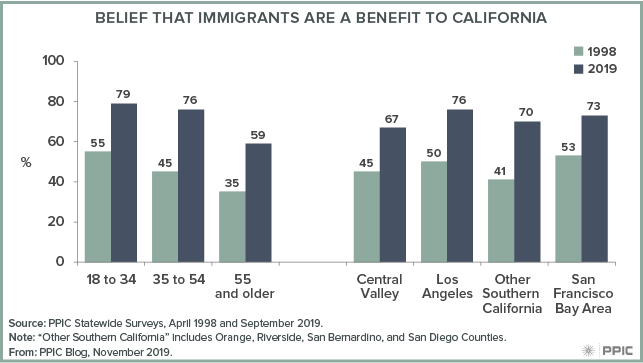 In recent years, Californians have supported policies to improve the lives of immigrants, such as providing health care for young undocumented Californians, taking state and local actions to protect immigrants, and supporting a pathway to citizenship. What role will immigration play in the upcoming election? Stay tuned to the PPIC Statewide Survey as we continue to examine Californians’ view of immigrants.