As the coronavirus pandemic continues to disrupt California’s economy, the Newsom administration is projecting a $54 billion decline in state revenues for the 2021 fiscal year and revising the budget accordingly. California’s public universities—which do not have dedicated funding streams or constitutional protections—face disproportionately large funding cuts. So far, the federal government has provided some emergency relief to mitigate the pandemic’s unprecedented impact on higher education. Without additional support, however, the state’s public colleges might have to reduce student access and services.

During the Great Recession, a drop in state revenues of $40 billion in 2009 led to cuts equaling roughly one-third of state funding for the University of California (UC) and California State University (CSU) systems (on a per student basis). Consequently, tuition doubled at UC and CSU, faculty and staff were laid off or furloughed, and critical capital improvements and maintenance were deferred.

In turn, students faced reduced access to courses, higher student-faculty ratios, increased costs, and fewer support services. As the economy improved, the state was able to increase allocations to the state’s colleges. As a result, UC and CSU admitted thousands of additional students, graduation rates went up, and the number of degrees awarded increased substantially. 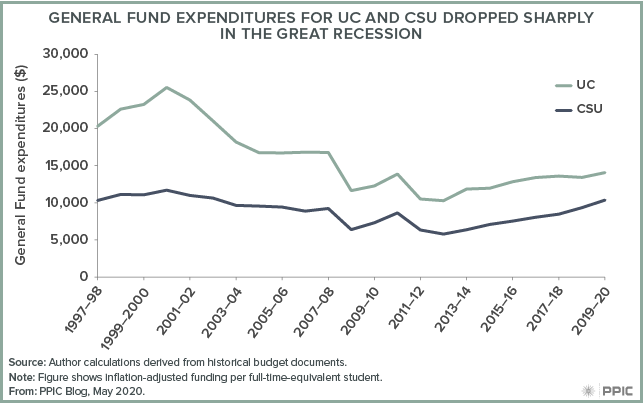 Early evidence suggests that the global pandemic could have an even more dramatic fiscal impact on public higher education in California. In the short-term, public colleges face critical revenue shortages: now that students have been sent home and instruction has moved online, revenues from auxiliary enterprises (housing, food, parking, etc.) have evaporated. In addition, UC has suspended elective surgeries at its medical centers and is incurring costs associated with research and treatment of the coronavirus. CSU has projected revenue losses of $337 million for the spring semester, while UC projects a $500 million loss for the month of March alone.

In the longer-term, the systems may find it challenging to raise additional revenues. The percentage of out-of-state students—who pay higher tuition—is now capped at 18% for the five most popular UC campuses, and enrollment of international students is likely to decline due to visa and travel restrictions. Endowment funds are shrinking and tuition increases are controversial. Moreover, unprecedented levels of unemployment will increase demand for federal, state, and institutional financial aid programs.

Governor Newsom’s May budget revision includes a 10% cut for each public higher education system. The revised budget proposal also reduces state financial aid for students who attend nonprofit private colleges from $9,084 to $8,056 per year. The budget proposal does allow UC and CSU to redirect some restricted revenues and to refinance debt at historically low interest rates. However, without additional revenue–whether through federal or state support, or tuition increases—it will be difficult to improve access, quality, and student success in the coming years.