Reading the Tea Leaves on the Governor’s Recall

COVID-related decisions affecting California’s K–12 public schools and the economy have been among the most vexing issues faced by state officials in the past year. Has voter frustration with Governor Newsom over these two key policy arenas fueled the recall effort? Clearly, some Californians have been unhappy with his approach, and this may have aided the push for a recall. The California Secretary of State recently reported that recall proponents have met the signature threshold. But voter discontent with schools and the economy falls short of the majority needed to remove the governor from office—and reflects the hyper-partisanship in this blue state—in the most recent PPIC Statewide Survey.

The disruption of the school year and student learning has been a major issue during the pandemic. When asked about Governor Newsom’s handling of the state’s K–12 public education system, 58% of likely voters say they approve (40% disapprove) in the April PPIC survey. The governor’s K–12 approval rating was higher a year ago in the early days of the pandemic (73% April 2020 PPIC survey) but it was about the same two years ago, just a few months into his tenure (54% April 2019 PPIC Survey). Today, partisan approval differs widely (81% Democrats, 18% Republicans, 55% independents). About half or more approve across age, education, gender, income, regional, and racial/ethnic groups. In a separate question, ratings for his handling of the reopening schools are similar (59% approve, 40% disapprove).

Despite myriad COVID-related challenges to students, teachers, and families, 53% of likely voters say that the state’s K–12 public education system is generally going in the right direction (45% wrong direction). This view was higher a year ago (60% April 2020 PPIC Survey) and lower two years ago (45% April 2019 PPIC Survey). Today, 71% of Democrats, compared to 49% of independents and just 24% of Republicans say the state’s K–12 school system is going in the right direction. About half or more across age, education, gender, income, regional, and racial/ethnic groups hold this positive view.

Positive views are also evident on the economic front. When asked about Governor Newsom’s handling of jobs and the economy, 59% of likely voters say they approve (40% disapprove). The governor’s approval ratings on the economy have been similar throughout the pandemic (59% December 2020 PPIC survey, 59% July 2020 PPIC survey, 57% May 2020 PPIC survey). Today, partisan division runs deep on approval for this issue (84% Democrats, 52% independents, 17% Republicans). About half or more across age, education, gender, income, regional, and racial/ethnic groups approve of Newsom’s handling of the economy.

While the governor’s approval ratings on the economy have held steady for more than a year, this month we see a dramatic uptick in views on the economy itself. When asked about economic conditions in California, 55% of likely voters say they expect good times financially in the next 12 months (43% bad times)—up sharply from less optimistic ratings in the past year (30% December 2020 PPIC Survey, 17% July 2020 PPIC Survey, 21% April 2020 PPIC Survey). Today, 67% of Democrats, 57% of independents, and 31% of Republicans expect good economic times in California during the next 12 months. About half or more hold positive views across age, gender, regional, and racial/ethnic groups. Optimism about the economy rises as income and education levels increase.

In sum, the level of discontent with the governor’s handling of schools and the economy today are in the range of overall disapproval of the governor (42% disapprove, 53% approve) and support for the recall (40% remove him, 56% keep him) in the March PPIC Survey. This is because partisans are deeply divided and highly consistent in their approval ratings and recall support. In addition, voter registration favors one party (46% Democrat, 24% Republican, 24% no party preference). Perceptions of the COVID crisis may also influence Californians’ views about state leaders—voters said it was the top issue for the governor and legislature to work on this year in the January PPIC survey. And today, Californians are feeling more confident that COVID is getting under control—expressing less worry than last year—according to the April PPIC survey. 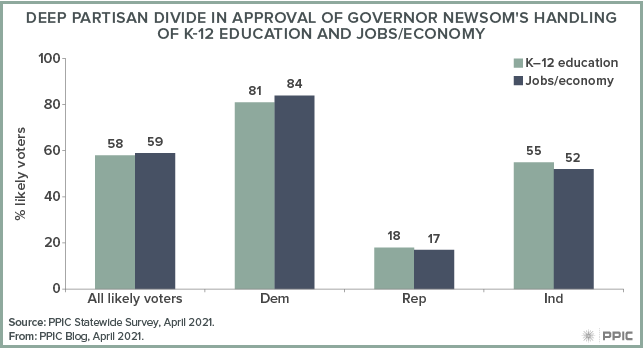 If progress containing the virus backslides before the likely fall recall election—placing the reopening of schools and the economy in jeopardy—voters’ approval of the governor and support for keeping him in office could slip. In this hyper-partisan era, voters outside of the major parties are most likely to change their minds about leaders. PPIC will keep a watchful eye on public opinion on leading indicators of political fortunes—including COVID-19, schools, and the economy—in the months ahead.