In the midst of the COVID-19 crisis, work continues on managing groundwater for long-term sustainability, as required by California’s landmark Sustainable Groundwater Management Act (SGMA). In January, water users in 21 critically overdrafted basins delivered their groundwater sustainability plans to the state Department of Water Resources. In this series, we examine the 36 plans submitted for 11 critically overdrafted basins in the San Joaquin Valley—California’s largest farming region, where excess pumping is a major challenge.

What is subsidence, and why does it matter?

Excess groundwater pumping can compact soils, causing land to sink. Because this subsidence can damage costly infrastructure, avoiding it is an important reason to manage groundwater.

Subsidence due to groundwater pumping has been occurring in the San Joaquin Valley for almost a century, but it accelerated during the 2012–16 drought. Subsidence has damaged some critical water conveyance arteries, including the Friant-Kern Canal (40% of capacity lost in some stretches), and the California Aqueduct (more than 20% of capacity lost). Bridges over these and other canals are sinking, a local dam can’t hold water anymore, and stretches of the high-speed rail track have been designed to prevent damage from future subsidence.

Subsidence can also permanently reduce the capacity of aquifers to store water. Valley aquifers may have lost as much as 3.25% of their capacity from soil compaction during the 2012‒16 drought.

This infrastructure damage doesn’t just affect the individual farms or water agencies that are pumping groundwater—it affects other parties, both locally and many miles away. Mitigating damage will cost many millions, if not billions, of dollars.

How does SGMA require plans to address subsidence?

Under SGMA, land subsidence is one of the six undesirable results that every groundwater sustainability plan should seek to avoid. Plans must define indicators to track subsidence over time, and set thresholds to avoid “significant and unreasonable” impacts.

In principle, this framework allows plans to be more tolerant of continued subsidence in places that will not incur as much damage—for instance, in areas without major infrastructure. Local pumpers have an interest in this flexibility, because avoiding subsidence generally requires significantly curtailing groundwater use, and this curtailment is especially costly during droughts. But to be sure they are not causing harm, plans need to consider the consequences of subsidence for other parties—many of whom are not part of the local groundwater planning process.

Are the plans taking adequate steps?

In practice, the plans vary widely in their approaches to addressing subsidence. In several areas where infrastructure has already been damaged, agencies are setting thresholds to avoid additional subsidence. For instance, in the Chowchilla basin and parts of Delta Mendota, goals include avoiding further damage to local conveyance infrastructure and to levees that provide flood protection. But most plans set thresholds that are not tied to specific past or future impacts. And many of these thresholds are quite high—allowing the rates of land subsidence observed during the recent drought. This raises the risk of future harm, even in areas that have not yet experienced damage.

The figures below show subsidence rates over the past five years—which included both wet and dry years—alongside the cumulative amount of subsidence that the plans would allow over the next two decades. Recent subsidence rates are measured using satellite data, funded by the Department of Water Resources. Many plans are giving themselves a lot of leeway over the next 20 years, in some cases accepting 10–15 feet of additional subsidence. Even the lower thresholds in some sensitive areas might not end infrastructure problems and conflicts. For instance, the Friant Water Authority has warned that plans in the Tule basin will further reduce capacity in the Friant-Kern Canal, significantly affecting downstream water users. Similarly, the Department of Water Resources found that an additional 2.1 feet of subsidence in some sections of the California Aqueduct could further harm downstream water users. This is roughly one-third of the maximum amount allowed in the vicinity of the aqueduct by the Westside basin plan (6 feet). 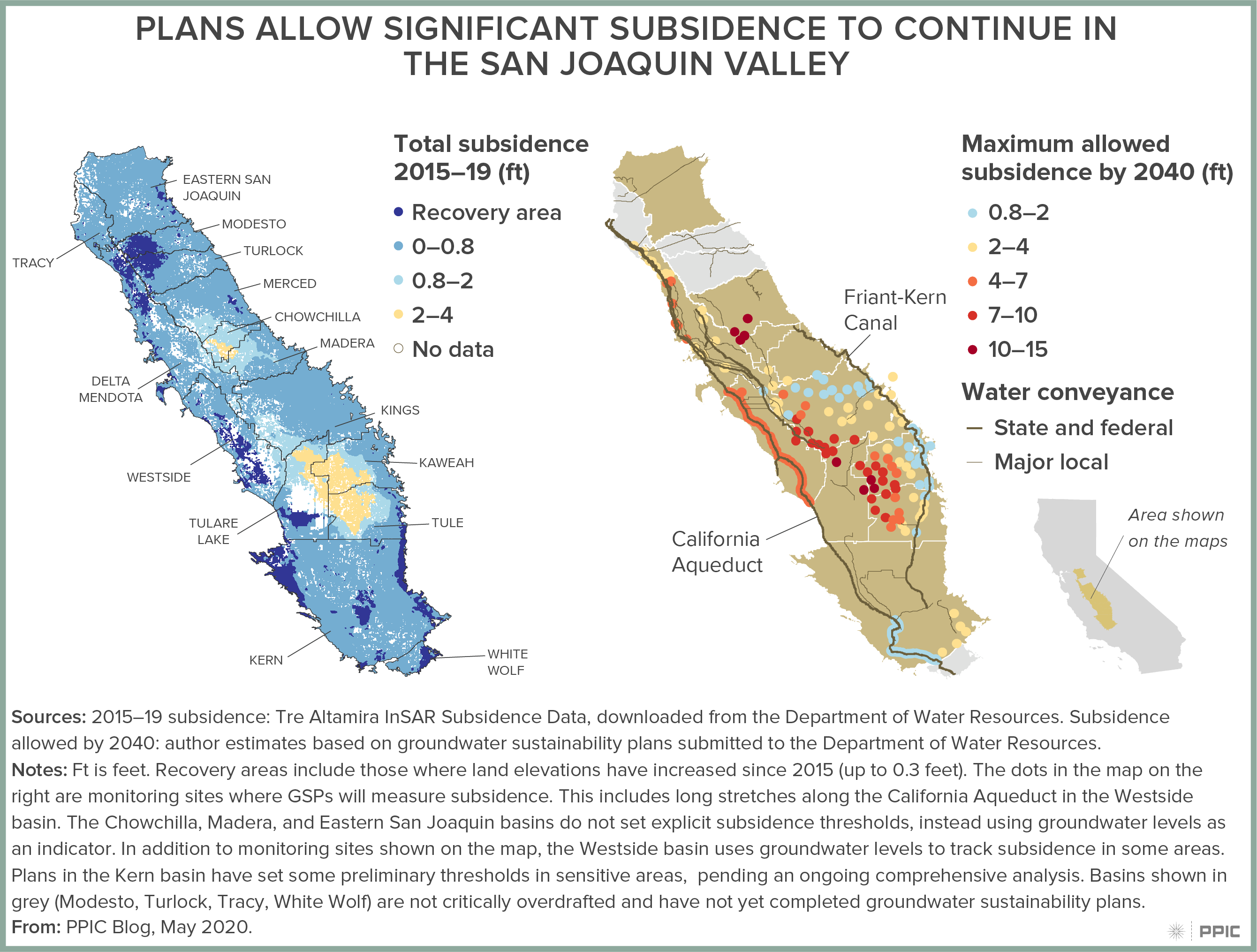 The valley’s groundwater plans are at an early stage in tackling land subsidence. One important next step will be strengthening the information base for effective management. The paucity of public monitoring data raises challenges for local efforts. Continued state support for annual valley-wide surveys using satellite data could reduce overall monitoring costs and facilitate early identification of subsidence hotspots. The state should also press water users to provide more robust assessments of the risks of future subsidence in their plans.

What’s the Plan to End Groundwater Overdraft in the San Joaquin Valley?