Two months after George Floyd’s death, protests and calls for policies to address systemic racism continue across the country, and racial justice issues could play a pivotal role in the presidential and congressional elections this fall. In our July PPIC Statewide Survey, we find that most Californians support Black Lives Matter—a movement that the late civil rights icon and US Representative John Lewis, who is being memorialized today, saw as a continuation of his life’s work. While racism is widely viewed as a big problem, we find significant racial disparities in Californians’ experiences of discrimination and unfair treatment due to race or ethnicity. 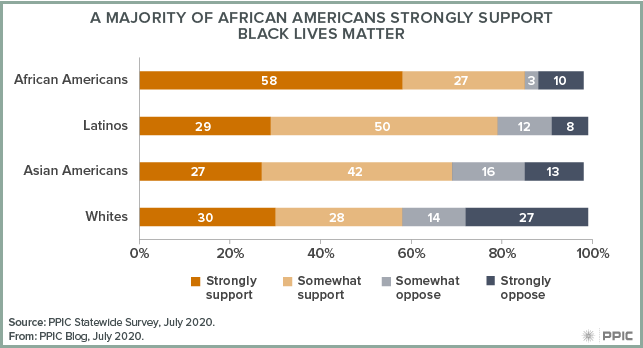 Most Californians view the criminal justice system as biased against African Americans. At least half across the state’s regions and demographic groups hold this view, including 91% of African Americans and 79% of those under 35. Here, too, there are partisan differences, with strong majorities of Democrats (84%) and independents (66%) but fewer Republicans (30%) saying there is racial bias. 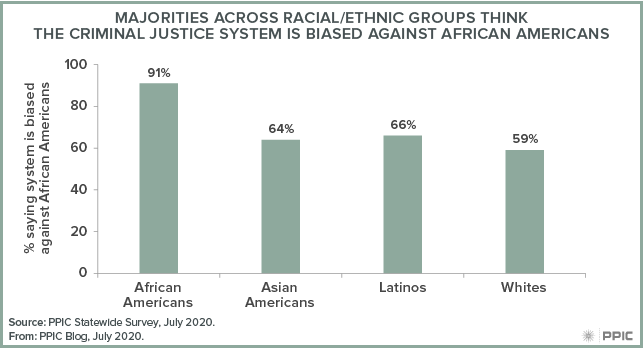 Six in ten Californians consider racism to be a big problem in the US today. At least half across regions and demographic groups hold this view, including 86% of African Americans and 66% of adults under 35. Here again, there is a wide partisan divide: eight in ten Democrats (81%) and about half of independents (55%) see racism as a big problem, compared to just one in four Republicans (25%). 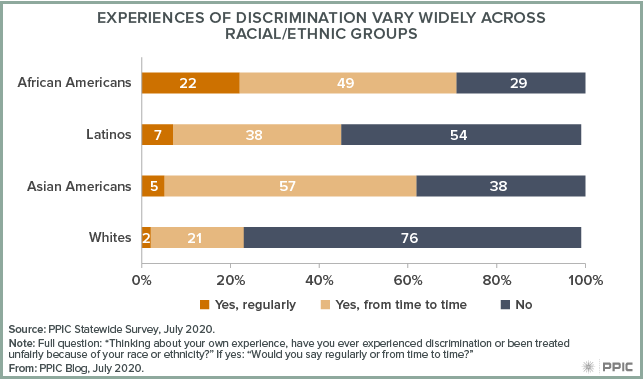 We find substantial agreement across racial/ethnic groups on racial issues, but we also see a deep political divide between Democratic and Republican voters. Stay tuned to the PPIC Statewide Survey as we continue to track the views of Californians on race and monitor the impact of this and other key issues on the November election.