The federal EITC assists a quarter of all Californians

NOTE: All estimates reflect EITC amounts imputed for 2017, using a baseline created in 2013–2015 data. This baseline incorporates a cost-of-living adjustment for the Supplemental Security Income (SSI) and CalWORKs programs, the 2017 minimum wage levels, and other adjustments. Low-, mid-, and high-cost counties were defined by splitting counties into three roughly equal groups based on CPM threshold. Statewide, the average CPM threshold over 2013–2015 for a family of four with two children is $31,019. In low-cost counties, it is $24,983; in mid-cost counties, $27,957; and in high-cost counties, $32,734. See Reducing Child Poverty in California for more details about the methodology.

Without the EITCs, many more children would be in poverty and deep poverty 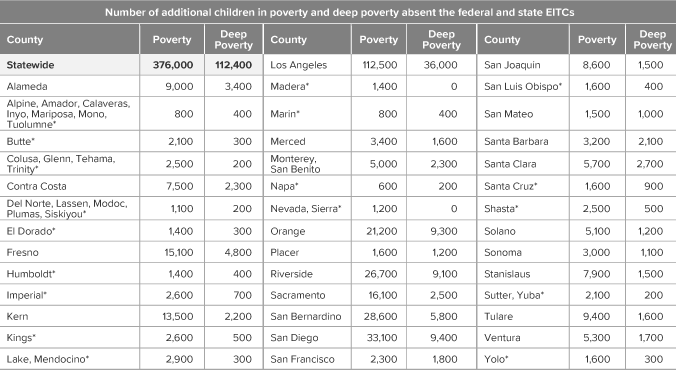 NOTE: All estimates pertain to children ages 0–17 and use the baseline data described in the figure note above. Numbers are rounded to the nearest 100. Counties whose poverty rates cannot be calculated individually are grouped. All estimates are subject to uncertainty due to sampling variability; uncertainty is greater for less-populous counties and county groups because of smaller sample sizes. Asterisks indicate sample sizes under 2,000. For more about the CPM, see our fact sheet, “Poverty in California.” For more county-level information and for poverty rates by state assembly, state senate, and federal congressional districts, see our data page.