Violent crime in four of California’s major cities—Los Angeles, Oakland, San Diego, and San Francisco—is broadly no higher than before the pandemic, although some violent crimes are up. Most troubling is a rise in assaults and homicides, which have stayed at roughly at the same levels over the last few months with no clear signs of further increases at this time.

The reported number of larcenies and residential burglaries remain lower than before the pandemic, while car thefts and commercial burglaries have increased. Violent crime is near rates from early 2020, but the number hides a drop in reported rapes and robberies that roughly offsets a rise in aggravated assaults and homicides.

The pandemic and its aftermath likely affect swings in crime numbers, swings that are common even in usual times.  These numbers may reflect recent circumstances such as the severe recession, shelter-in-place orders, restrictions on business openings and travel, as well as the civil unrest in the wake of the killing of George Floyd.

We examine crime data for these four large cities through September 15, 2020. These are preliminary numbers that are subject to revision before they are submitted to the California Department of Justice as part of the state’s official crime statistics. Furthermore, the numbers do not represent all of California.

Reported crime numbers plunged in the immediate wake of COVID-19 but broadly levelled off in April. The reported number of violent crimes decreased by roughly 16% by April and leveled off until starting to climb in early June. Numbers are now near early 2020 levels. Property crime decreased by 23% in March but also leveled off—and increased in early June. Then reported property crimes fell again in July, and these numbers are now similar to April 2020. 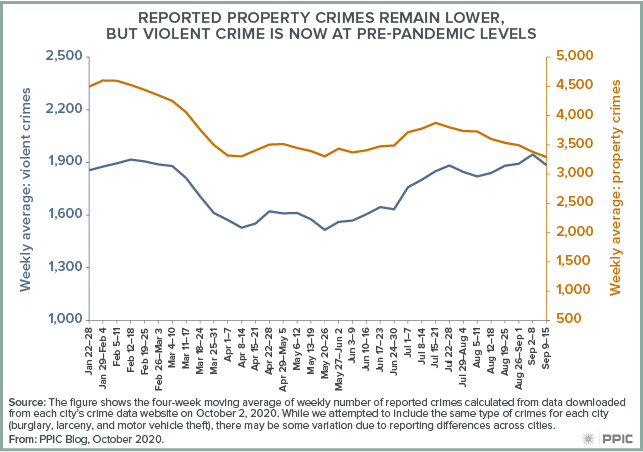 To gain these insights, we compare the average weekly number of crimes in January–February to the average from July through September 15. Reports of robberies and rapes both dropped by about 20%, from 356 to 284 and 87 to 69 per week, respectively. However, assaults rose about 5% from 1,418 to 1,487. Homicides rose about 30%, from around 7 to 9. Note that the number of homicides excludes Oakland as the data includes many unexplained deaths that were later determined not to be homicides. 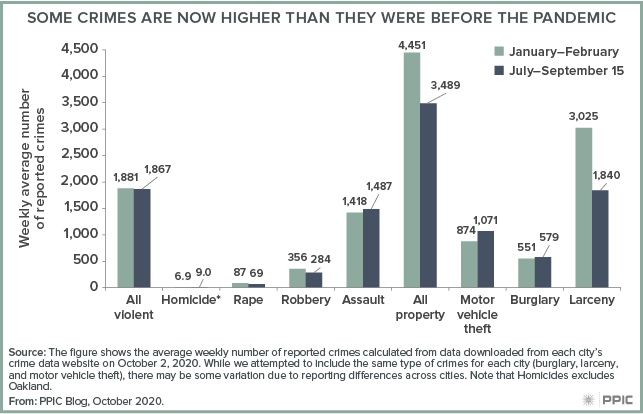 It is unclear what factors lie behind these increases—rising gun violence has been cited as one contributing factor. The need to continue monitoring crime trends, investigating underlying causes, and identifying effective solutions continues to be high, especially during these challenging times.