How Are California’s Cities Managing the Drought?

The 2022 water year just ended, and the numbers confirm our suspicions: The 2020–22 drought has been the driest three-year period on record. The drought has harmed California’s freshwater ecosystems, dried up thousands of drinking water wells in small communities, and led to fallowing of hundreds of thousands of acres of cropland. Cities, however, have fared better: As in the 2012–16 drought, they have avoided major supply disruptions. But you wouldn’t know this from the news, where the main story is that urban water agencies have failed to meet Governor Newsom’s July 2021 call for a 15% voluntary reduction in water use. So are cities failing to manage the current drought? Or are we focusing on the wrong metrics?

A bird’s-eye view of water conservation across the state suggests that Californians did fall significantly short of Governor Newsom’s 15% goal: As of August 2022, water agencies collectively reduced their use by just 4% since July 2021. Just a handful of agencies (4%) had met or exceeded the 15% mark (see figure below). 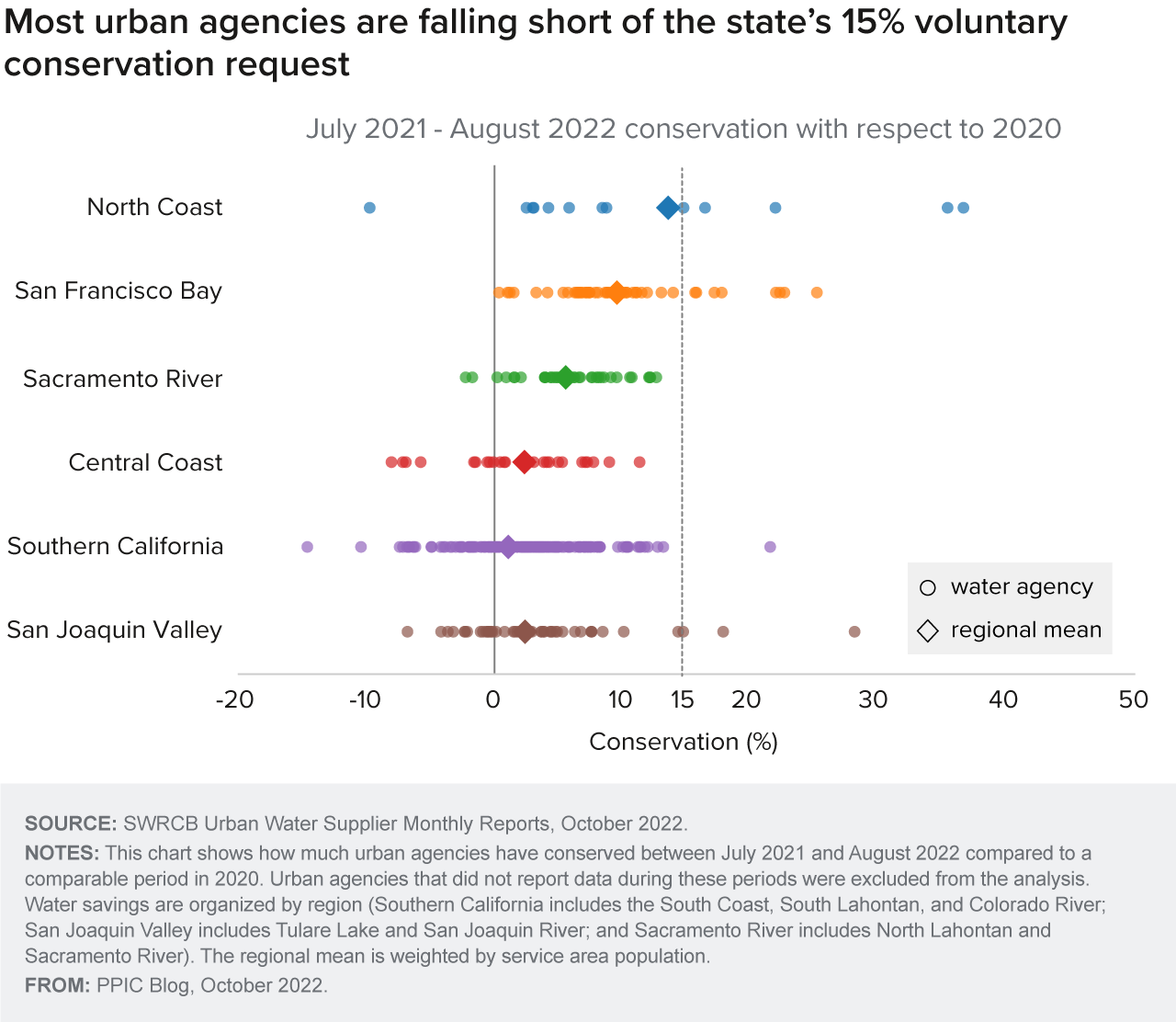 But as we explained in a blog post last December, urban water savings are not actually so low when put in context: Most communities went into this drought using much less water than they did in the early years of the 2012–16 drought. Especially in places where water use is already very low—like much of the Central Coast—this makes additional savings harder to come by.

Furthermore, statewide averages can be misleading. The current drought initially hit Northern California hardest. A drought emergency was not declared in Southern California—home to roughly 60% of the state’s population (and urban water use)—until fall 2021, months after the governor’s call for savings. Such regional differences in drought conditions affected the alignment of local conservation policies with the governor’s statewide call. Initially, water agencies in the North Coast and parts of the Bay Area pushed hardest for belt tightening, reflecting local shortages (see figure above). A similar pattern occurred at the start of the last drought, where agencies in the Central Coast and Sacramento regions were the first to take action.

By summer 2022, when drought impacts were more widespread, so were local agency calls for conservation. Statewide savings jumped dramatically—by 9% compared to 2020. More than 91% of all agencies were saving more than in the prior summer, and 23% were exceeding the 15% voluntary goal (see figure below). 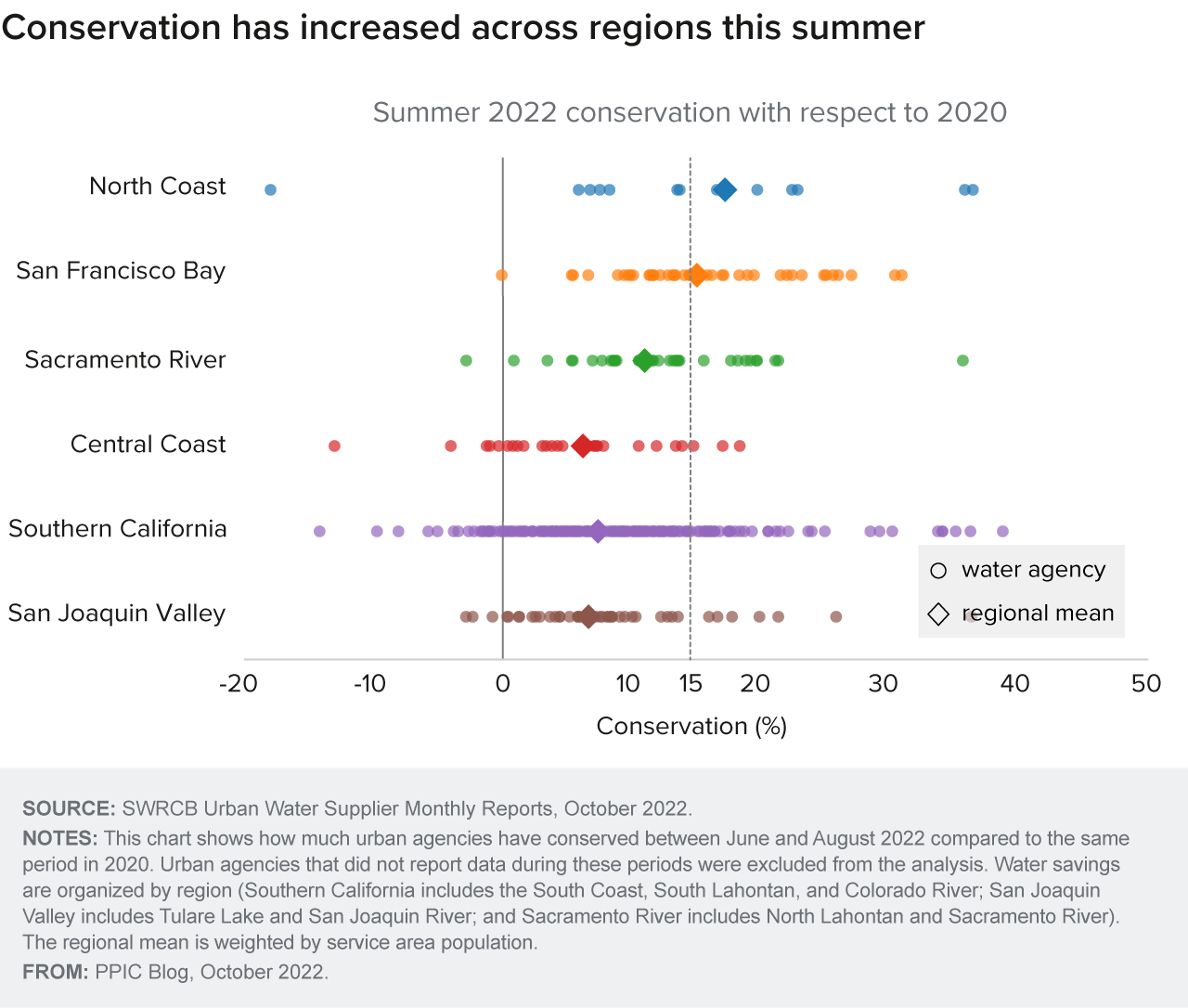 The two sides of resilience

Asking customers to conserve more water when supplies are tight is a key component of urban drought resilience. But managing demand is only one side of the equation; the other side is maintaining robust supplies. Having access to a diversified portfolio of water sources—including water in storage—can help avoid the need for severe water rationing during droughts. Urban agencies are generally in decent shape—despite the drought—because they have made massive investments to reduce long-term demand and improve supply reliability over the past few decades.

A closer look at water use in summer—when demand is highest—shows that agencies facing acute supply constraints reduced use significantly during this drought (see figure below). Agencies in the top row—from the North Coast and Bay Area—called for big water savings in 2021 to address local shortages. Agencies in the bottom row—Southern California communities that rely heavily on the drought-challenged State Water Project—adopted major use restrictions in June 2022. In all cases, customers responded to these local drought actions. For most of these agencies (and for 27% of all agencies statewide), recent savings were even larger than in the summer of 2015, when a statewide conservation mandate was in effect. 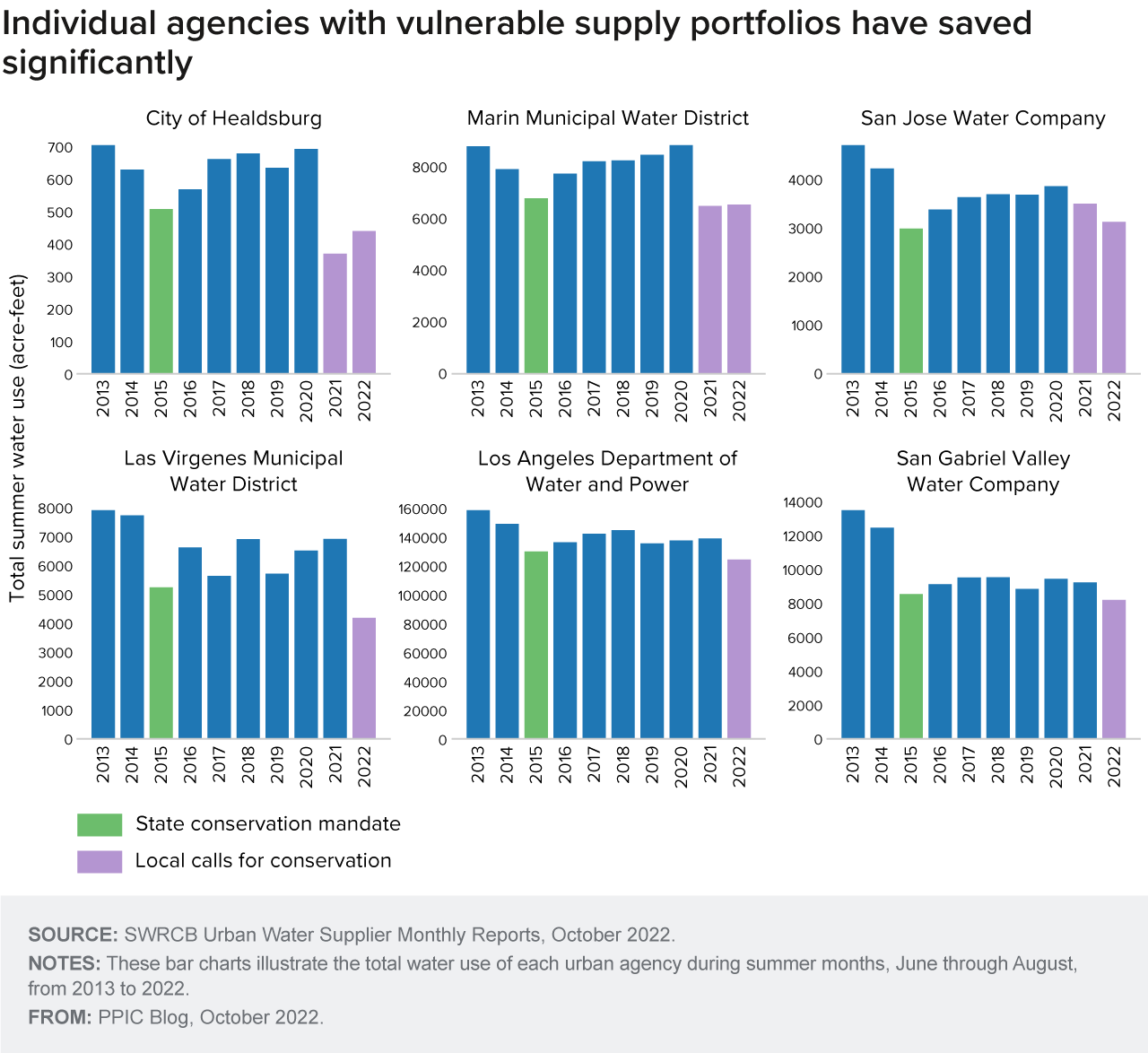 Of course, some communities may need to save more, particularly if it remains dry next year. But focusing only on the cumulative conservation levels since July 2021 can give the mistaken impression that urban water agencies are not prepared to manage this drought.

In sum, conservation is important, but it is only part of a spectrum of actions that lead to true drought resilience—and the 4% statewide conservation number is misleading when you dig into local details. Local action has worked for most agencies during this drought: When locals need to save, they do. Another top priority going forward is to continue building supply resilience in our changing climate—a key to reducing drought risks for California cities and suburbs.