California’s rivers and streams have experienced enormous changes over the past 150 years, and a warming climate brings new challenges. We talked to Ted Grantham—a river scientist at UC Berkeley and a member of the PPIC Water Policy Center research network—about the state of the state’s rivers. Grantham was recently appointed as the first PPIC CalTrout Ecosystem Fellow. Thanks to the donors that helped us launch this program: Gary Arabian, the Morgan Family Foundation, Nick Graves, John Osterweis, and the Rosenberg Ach Foundation. 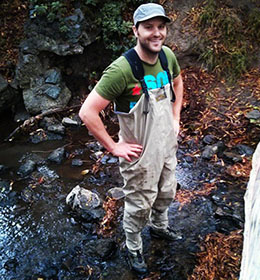 PPIC: Talk about the changes affecting California’s rivers and streams.

Ted Grantham: California’s rivers and streams have experienced so much change since European settlement that they’re considered “novel ecosystems.” Gold mining and logging brought a massive amount of sediment into rivers. Riparian forests that lined Central Valley rivers and extensive wetlands on the valley floor have mostly been converted to farming. Non-native species have been introduced to most of California’s rivers, lakes, and estuaries, which prey upon or compete with native species. Urban rivers across the state have been channelized. And essentially every major river and stream in the state is impacted by a dam. Dams aren’t just barriers to migratory fish, they also alter downstream flows.

We’ve also prevented rivers from being able to move. Rivers are not static features; when given the opportunity, they will dynamically respond to changes in climate. This dynamism is inherent to how rivers work—it’s how habitat is created and maintained for many species. And it’s what makes these systems resilient over time.

Given all these fundamental changes, it’s remarkable that most of the state’s native fish species are still with us, although many are at risk of extinction.

PPIC: How are the state’s rivers expected to respond to climate change?

TG: The most direct change is increasing temperatures. Our rivers and streams will continue to heat up in a warming climate. Even if average precipitation stays the same, we’ll also experience more extremes, with both drought years and wet years more likely to occur. While increasing floods pose risks to some river ecosystems, it’s drought we’re most concerned about. Drought not only reduces the amount of water available for the environment, it also intensifies competition with other water users, making it harder to protect freshwater ecosystems.

Climate change is particularly problematic for cold-water fish such as salmon. In the short term, large dams have the potential to limit warming to some degree because they hold reserves of cold water. For example, Shasta Dam is managed to sustain salmon populations downstream through cold-water releases. But if water gets too warm over time, our ability to sustain cold-water reserves in the reservoir will decline. In the long term, redesigning dams to allow for fish passage or strategically removing dams will give salmon access to cold water in higher elevation streams.

PPIC: How can we prepare rivers for a changing climate?

TG: There are several promising management strategies that are gaining traction and could help build climate resilience in our rivers. Two important ones are securing environmental flows and restoring floodplains.

“Environmental flows” refers to the quantity, quality, and timing of water needed to maintain healthy rivers and ecosystem services that people rely on. In the past, little consideration was given to water needs of the environment. But that is changing and we’re seeing a growing effort to establish legally protected water allocations for environmental benefits. For example, I’m currently involved in the California Environmental Flows Framework, a program to support the development of environmental flow standards in rivers and streams throughout the state.

We’re also seeing more interest in multi-benefit approaches to floodplain management. Most of California’s rivers are disconnected from their floodplains, which have been converted to agriculture and urban uses. This has had huge impacts on fish populations and other species. As the likelihood of extreme floods increases with climate change, reconnecting floodplains is a cost-effective way to reduce flood risk. What’s exciting is that floodplain restoration can be compatible with agriculture and can also provide productive habitats. For example, the Yolo Bypass is primarily managed to protect Sacramento from flooding, but it also supports seasonal agriculture and habitat for birds and fish. Bringing water back to our floodplains can even help replenish groundwater, which is a critical water source in drought years.