Throughout California and the nation, hundreds of thousands of high school seniors are currently making decisions about where to attend college. An increasingly important part of that decision is based on career opportunities. PPIC’s statewide survey on higher education finds that the vast majority of Californians (77%) believe the state’s higher education system is very important to the economic vitality of the state.

Students’ career goals play an important role in the decision to go to college at all. According to an annual nationwide survey of freshmen conducted by UCLA’s Higher Education Research Institute, the vast majority of students agree that a very important reason to go to college is “to be able to get a better job” (85%) and “to get training for a specific career” (76%). A record-high 60% of students say that a very important consideration in choosing a college is the ability of its graduates to obtain good jobs.

Students are right in thinking that college can give them economic advantages. Using data from the 2014 and 2015 American Community Survey, we examine some basic labor market outcomes for recent college graduates (ages 22 to 29) in California. The advantages in terms of employment and wages are clear. Young adults with a college degree are much less likely to be unemployed and, on average, earn far higher wages. 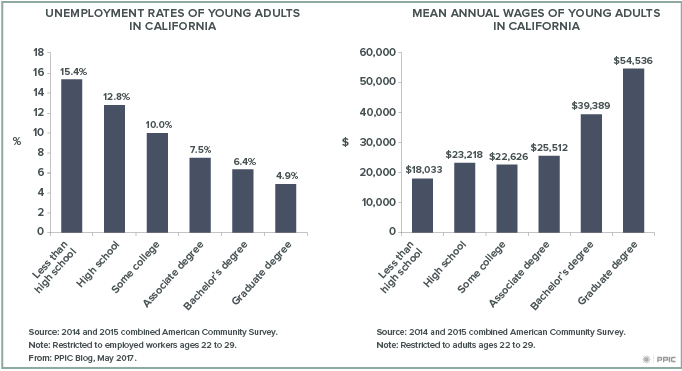 Of course, not all majors are equal when it comes to career opportunities. Among young adults with a bachelor’s degree, wages vary widely by major. Among the ten most popular majors for young adults in California, the most remunerative major is computer and information sciences; young workers with those degrees earn more than twice as much as young workers who majored in psychology. But even among those paid least, wages are still substantially higher than those of less educated workers. 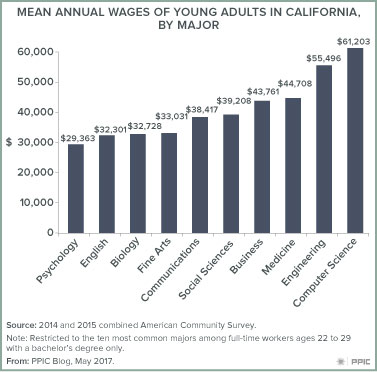 Students attend college for many important reasons beyond economics. But because career opportunities are an important consideration for most, state policymakers and higher education institutions should seek ways to provide students with accurate and meaningful information about labor market outcomes by college and by major. The American Community Survey does not provide information for specific colleges nor for community college certificates, but public colleges in California can link student records with wage records from the Employment Development Department. For example, California’s community colleges have created a “Salary Surfer,” which offers useful information on wages for students contemplating different career paths and provides a good model for other colleges to follow.

College and Major Can Matter A Lot for Starting Wages

College Graduates Have Higher Net Worth

Is College Worth it? What Graduates Say