Who Lives in California’s Nursing Homes?

Seniors aged 65 and over are the age group most at risk of dying from the COVID-19 virus. As of May 6, according to the California Department of Public Health, seniors accounted for 79% of all COVID-19 deaths (1,894 out of 2,412) in the state. Seniors who live in nursing homes—skilled nursing facilities—are especially vulnerable. But state programs that allow seniors to remain living at home rather than entering nursing homes may help protect California’s most vulnerable population.

Even as the senior population has grown with the aging of the baby boom cohort, the number of seniors in nursing homes has remained steady. According to the American Community Survey, about 88,300 seniors, or 1.7% of all seniors in California, live in nursing homes in 2018; that’s about the same number as in 2010 (87,500). 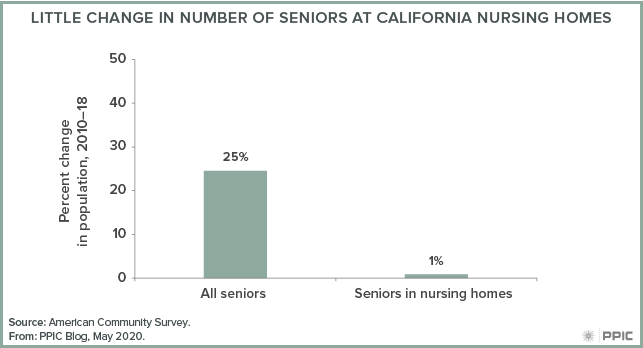 Women make up the majority of the seniors in California nursing homes (65%). Residents also tend to be very old—43% are age 85 or older—and not married. Similar to the overall senior population, the majority are white (58%). Even so, many residents (32%) speak a language other than English. Los Angeles County, the locus of the pandemic in California, has 35% of the state’s nursing home residents, but 26% of the state’s population.

Almost all nursing home residents have self-care limitations. That is, these seniors have a physical or mental health condition that has lasted at least six months and makes it difficult for them to attend to their own personal needs such as bathing, dressing, or getting around. And at least half (51%) are on Medi-Cal.

However, state and county programs have allowed more seniors to live at home. One such program, In-Home Supportive Services (IHSS), is intended to keep low-income seniors in their own homes rather than in nursing homes. IHSS offers services such as housecleaning, meal preparation, laundry, grocery shopping, personal care services—such as bathing, grooming, and paramedical services—and accompaniment to medical appointments.

Because of this arrangement, even seniors with self-care limitations are increasingly likely to stay in their own homes rather than move to a nursing home. Hundreds of thousands of California seniors receive care through IHSS.

The share of seniors in nursing homes across the rest of the country is about one-third higher than in California. A likely outcome of state efforts to keep seniors in their own homes has been to protect many seniors in this state from exposure to the pandemic.

Communicating to California’s Seniors about Coronavirus